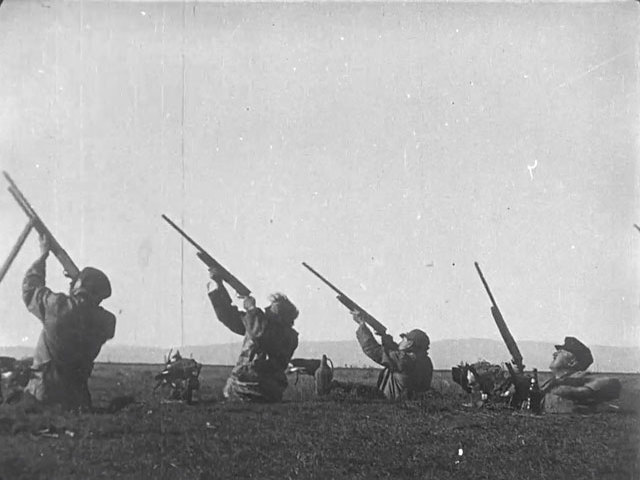 By the 1910s forward-thinking reformers were turning to movies to make their case for pasteurizing milk, fighting tuberculosis, building playgrounds, banning child labor, and a host of other reforms on the public agenda. Given how few of these message-driven works remain available today, it is difficult to pinpoint when conservationists first experimented with the medium. But it’s safe to say that of the wildlife protection films that still survive, Hunting Wild Geese for Market is among the earliest.

Produced by Salisbury Wild Life Pictures, the film is a visual argument for legislation to stop the mass killing of waterfowl in the Sacramento River wetlands of California’s Central Valley. It was released within weeks after the death at the Cincinnati Zoo of the last known passenger pigeon, once the most numerous bird of North America. The event energized sportsmen and conservationists who demanded government action to stave off extinction of other well-known species. For ducks and geese, the most obvious threat was the commercial “pot hunter” who slaughtered game on a large scale for resale to butcher shops and restaurants.

Hunting Wild Geese for Market follows a band of hunters who travel in style from Oakland to the Sacramento Delta via electric railway. The men are out to kill all they can, hiding in underground blinds and luring their prey with live decoys, fake birds, and other ruses. As piles of dead game—and liquor bottles—grow, intertitles plead to end the excess.

The brainchild of Edward A. Salisbury, a Californian sportsman who specialized in outdoors movies, the film was commercially distributed as part of a package of wildlife shorts. According to the industry trade paper Motion Picture News, the program drove home the conservation message “more forcibly than any printed report” but, unlike so many educational films, would “appeal to all but the most ignorant and unappreciative audiences.” The San Francisco box office figures bore out the prediction, with Moving Picture World reporting an audience of 120,000 over a two-week run at the Tivoli, elbowing the advertised feature off the schedule.

Like so many nonfiction works of the period, the movies also had the backing of an advocacy group, in this case, the California Fish and Game Commission. Accompanied by conservation lectures, the films became a centerpiece of an education campaign, launched in 1914, which reached more than 10,000 people on a single swing through the San Joaquin Valley. The commission wrote in its annual report that the success of the wildlife films “fully justified the effort…to place them before the people of this state.” The payoff came in 1917 when the California legislature banned the sale of wild ducks and geese and required all commercial trappers over the age of 18 to get a hunting license.

About the Preservation
This film was preserved under the direction of the Academy Film Archive from a 35mm nitrate print found in the collection of the New Zealand Film Archive. The work was funded through a Save America’s Treasures grant secured by the NFPF.

For many years an electric interurban railway carried passengers and freight via trolley from Oakland through the Sacramento Valley to Chico. The Western Railway Museum in Solano County, California, still operates several miles of the line for railroad enthusiasts.