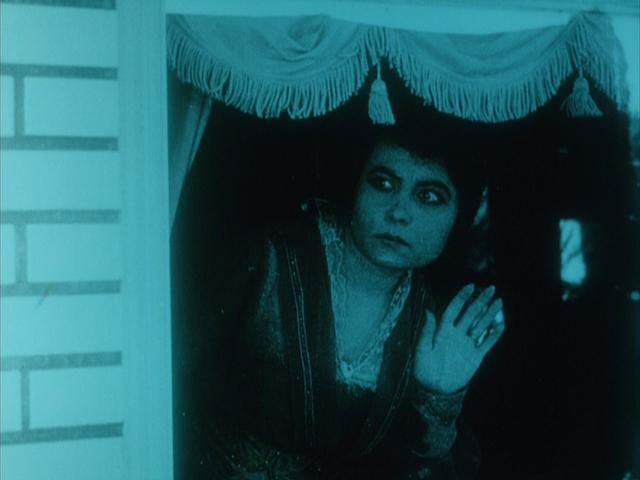 Lois Weber, early Hollywood’s leading female filmmaker, made Idle Wives at the height of her fame. Universal’s top director/screenwriter, she was equally renowned for social problem films on topics like contraception, drug abuse and capital punishment, and highbrow screen adaptations of William Shakespeare’s The Merchant of Venice and Daniel Auber’s opera The Dumb Girl of Portici. Made alongside these works, Idle Wives offers an astonishingly reflexive consideration of filmmaking and film viewing.

Characters in the film attend a movie titled Life’s Mirror (pointedly directed by one “Lois Weber”), where they see parallel, cautionary versions of their own lives. A shop girl “stepping out” with her boyfriend watches her screen surrogate conceive a child and retire to a home for unwed mothers. An estranged married couple watches as the wife’s onscreen counterpart, played by Weber herself, leaves an uncaring husband to return to her post as a settlement worker. A working family struggling to make ends meet learn the perils of living beyond their means. In each case the recognition of oneself onscreen proves revelatory—film viewing provides opportunities for identification and affect unavailable elsewhere.

The fictional filmgoers portrayed in Idle Wives—a wayward shop girl, a would-be social worker, and an impoverished family—all refer unmistakably to the storyline in Weber’s film Shoes, released just two months prior (and recently reconstructed by EYE—The Film Institute Netherlands). Casting Mary MacLaren as the shop girl in both films, Weber drew explicit connections between Idle Wives and her larger body of work. Doubly inscribed in the film herself, Weber plays a social worker onscreen while lending her name to the unseen director of Life’s Mirror, suggesting an allegiance between these two occupations.

Weber’s self-inscription also recalls the figure of the “Naked Truth” in her 1915 film Hypocrites, a female nude who floats through many scenes holding up a mirror where characters see themselves and their hypocrisies reflected. Like Weber, the “Naked Truth” offers not so much a mirror per se, but a revelatory instrument capable of reforming human behavior. Idle Wives shows Weber, like many filmmakers of her day, considering cinema’s extraordinary impact as it emerged as America’s leading mass entertainment in the 1910s.—Shelley Stamp, University of California, Santa Cruz

About the Preservation
We are delighted to be able to present both surviving reels of Idle Wives as a single piece for the first time in decades. During the first American film repatriation project with the New Zealand Film Archive, organized by the American Film Institute in the late 1980s, the second reel was located. It was shipped to the States in 1987 and preserved by the Library of Congress’s own preservation laboratory. In 2010, during the NFPF’s research trip supported by The Andrew W. Mellon Foundation, Leslie Lewis found the opening reel, which was preserved with tinting at Colorlab under the direction of the Library of Congress.

Although we’re still missing the concluding 5 reels, international partnerships such as the New Zealand Project remind us that some long-unavailable silent-era films are not truly "lost" but simply "not yet found."

Thank you Mike Mashon, Keith Paramore, and Rob Stone of the Library of Congress for providing the digital copy for this exhibition!

Further Viewing
Another 1916 feature by Lois Weber, Where Are My Children? is featured in program 2 of NFPF’s DVD set Treasures 3: Social Issues in American Film. Shelley Stamp contributes the commentary.

Lois Weber enthusiasts will not want to miss the retrospective of Lois Weber’s work curated by Shelley for the 2012 Il Cinema Ritrovato, the festival of preservation held each summer in Bologna, Italy.