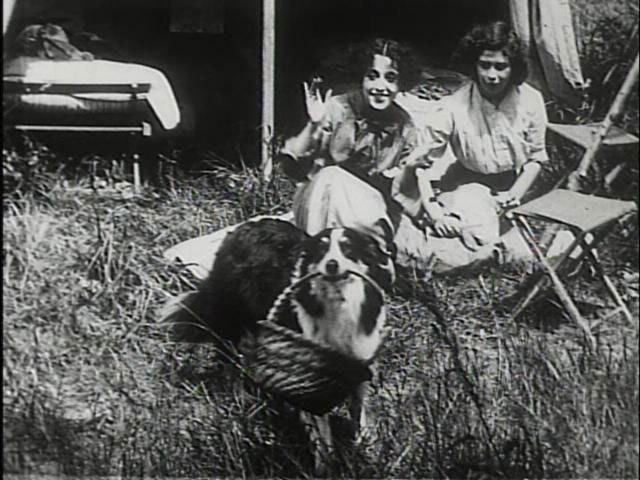 Like so many early film celebrities, Jean the Vitagraph Dog, America’s first canine screen star, broke into the movies by being in the right place at the right time. The black-and-white collie belonged to Lawrence Trimble (1887–1954), an aspiring writer who happened to be on the Vitagraph set one day when a dog was needed to play a scene. Jean performed perfectly and a star was born. Trimble joined the company, directing some 60 films before relocating to Britain in 1913. He directed his dog in more than a dozen.

Jean the Match-maker is thought to be the earliest of these to survive. It was shot during the summer of 1910 near Portland, in Trimble’s home state of Maine, along with Jean Goes Foraging, Jean Goes Fishing, A Tin-Type Romance, Sailor's Sacrifice (also released as Where the Winds Blow), and others. The film tells the story of bashful brothers who win sweethearts with the aid of their collie. The farm boys initially stumble upon the vacationing city girls at their campsite and beat an awkward retreat. To make amends, their mother sends the family dog back with fresh doughnuts. Jean perseveres as go-between with little results. Finally, the girls conspire to overcome the boys' shyness by crying out for help. The brothers "rescue" their damsels and triumphantly bring them home for dinner. The New Zealand print—the only one known to survive—breaks off as wistful matriarch, sadden by thought of her children leaving the nest, receives comfort from the ever faithful Jean.

Back in Brooklyn, Jean continued to work at a salary of $25 per week with Florence Turner, the Vitagraph Girl, and with other actresses, among them the eight-year-old Helen Hayes. By 1913, the dog was so well known that when she took a break to have a family, Motion Picture World reported the news: “Jean, the Vitagraph dog, is the happy mother of six little ones. Mother and children all doing nicely, thank you."

Soon after Jean died in 1916, Trimble began the search for another canine with screen presence. He saw potential in German Shepherds, a breed introduced a few years earlier for guarding sheep, and thought he had hit pay dirt with Strongheart. The dog debuted in 1921 as the mixed-breed wolf-dog in The Silent Call, a feature said to have electrified audiences and grossed a million dollars. Strongheart, however, was soon eclipsed by the charismatic Rin-Tin-Tin, who entered the movies the following year and became one of the most beloved stars of the 1920s.

Many thanks to our friends at Northeast Historic Film for contributing research on the film locale.

About the Preservation
This film was preserved under the direction of the Library of Congress from a tinted nitrate print discovered in 2010 at the New Zealand Film Archive. The work was completed in 2012 by Film Technology Company, Inc., with support from the NFPF.

Further Reading and Viewing
One of Trimble’s last films at Vitagraph, A Window on Washington Park (1913), was also discovered at the New Zealand Film Archive and preserved. It also features Vitagraph Girl Florence Turner.

Susan Orlean recounts the history of movie dogs in her Rin Tin Tin: The Life and Legend (2011). A preview for the lost Strongheart serial, The Silent Flyer (1926), is included in More Treasures from American Film Archives, which also features Clash of the Wolves (1925) with Rin-Tin-Tin.