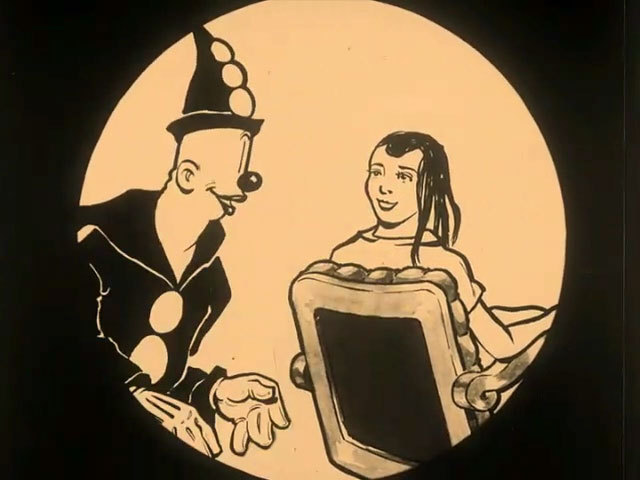 Koko the Clown was probably the first cartoon character created with a rotoscope, a transparent easel on which an animator could copy, frame by frame, projected live-action images. Dressed in a black clown suit that cast an easy-to-trace outline against white paper, Dave Fleischer played the clown and his brother Max did the drawing. The result was animation so fluid and apparently effortless that it seemed to be brought to life.

Released soon after World War I, the initial Out of the Inkwell offerings created a sensation and grew into a series by 1920. The early episodes introduced the blend of live action and animation that came to characterize the Koko cartoons. The usual opening begins with the clown taking shape from Max Fleischer’s pen and immediately making demands. Attempts to satisfy the character set into motion mind-boggling complications that escalate until the animator puts his creations back into the bottle.

The ending of Koko’s Queen is decayed in the Dutch copy—the only 35mm print thought to exist—but the story shines through. Koko and his dog Fitz emerge from the pen. When the pair learn that Fleischer’s girlfriend is a beauty contest competitor, they demand female companions too. The animator draws one for each but these fall short of expectations. Koko tries with beauty contraptions to remake his girl until—giving up—turns her head around backwards and substitutes a mask for her face. Fitz follows suit with similar results but, with shocking dream logic, grinds his mate into sausages. Losing patience, Koko draws his ideal—a beauty so perfect that she becomes human—and accosts her. The animator drinks “Shrinko” to save the damsel, battling the clown mano a mano. Only returning Koko to the bottle can clean the mess up.

Koko’s Queen was released on October 1,1926, shortly after Red Seal was dissolved in bankruptcy and replaced by the Fleischer brothers’ new company. Ko-ko, his name now spelled with a hyphen for legal reasons, survived to resurface in a Paramount series.

About the Preservation
Koko’s Queen was preserved in 2014 at Colorlab Corp from a tinted 35mm Dutch-language nitrate release print loaned by EYE Filmmuseum. The restoration was supervised and funded by the Academy Film Archive and used translated English intertitles prepared by Massimo Benvegnù. To recreate the original American release version, the animated opening sequence and concluding “Out of the Inkwell” card were taken from other cartoons in the series. The version of the cartoon available on video in the United States is based on a later, shorter reissue and has a truncated ending.