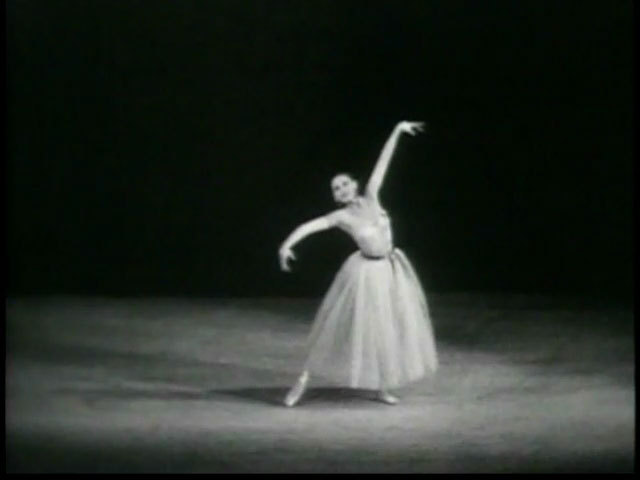 Dance is the most fleeting of art forms. This amateur footage from a half century ago preserves moments of George Balanchine’s choreography as performed by the dancers for whom he created it.

Filmed were two excerpts from Balanchine’s 1951 ballet La Valse (The Waltz), choreographed to Maurice Ravel’s Valses, nobles et sentimentales (1911). The waltz, popular since the eighteenth cen­tury, often inspired ballet choreographers to evoke lost eras. The critic Anatole Chujoy described La Valse as “neo-romantic, permeated with the spirit of the romantic period of the 30s of the past century.”

George Balanchine (1904–83) is acknowledged as the twentieth century’s greatest ballet choreographer. Born in czarist Russia, he came to America in 1933 and with Lincoln Kirstein founded in 1948 the New York City Ballet, where La Valse premiered on February 20, 1951. During his fifty-year career, Balanchine choreographed more than four hundred works, including many dances for theater and film. His demand­ing choreography re­quired superbly trained dancers. The two seen in these pas de deux from La Valse both trained under his supervision at the School of American Ballet. Tanaquil Le Clercq became one of the New York City Ballet’s most renowned principal dancers, performing key roles for Balanchine, to whom she was married from 1952 to 1969. Her career was cut short by polio in 1956. Nicholas Magallanes, a native of Mexico, danced primarily for the New York City Ballet from the late 1940s until his retirement in 1973.

This 16mm film was taken during a 1951 performance at the Jacob’s Pillow Dance Festival, the oldest continuing U.S. dance festival, located in the Berkshire hills of western Massachusetts. The photographer, Carol Lynn, was a dancer, choreographer, and administrative director of the Jacob’s Pillow School from 1936 to 1960. Her films, now at the New York Public Library, include more than 150 performances at Jacob’s Pillow. —Scott Simmon

About the Music
In 1994, the NYPL’s Dance Division, in conjunction with the George Balanchine Trust, began a project to add piano accompaniment to selected silent dance films. Dancers specializing in Balanchine choreography worked with sound technicians to synchronize the dance and music. Playing the Ravel score for these excerpts from La Valse is pianist Dianne Chilgren, who studied at the Eastman School of Music and Indiana University and was a longtime accompanist for New York City Ballet rehearsals and class sessions. —Scott Simmon