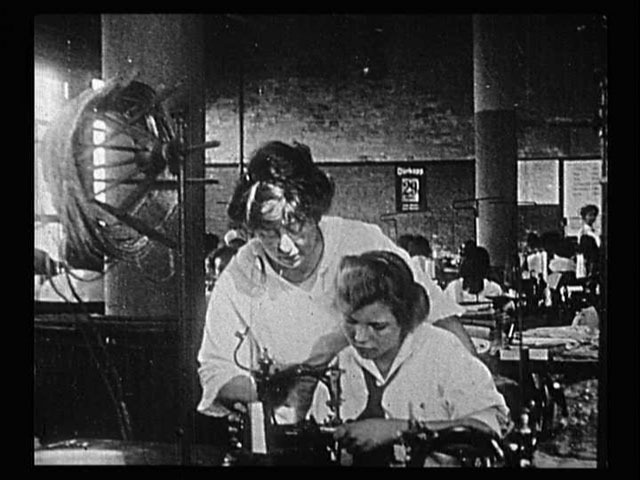 The Manhattan Trade School for Girls was an exemplary Progressive Era institution, the brainchild of a group of New York City reformers and philanthropists concerned about girls forced into the workplace. The “experiment without precedent”—in the words of the school’s first Annual Report, of 1903—aimed to provide “girls who must go to work” at age 14 with a few employable skills. At the time of this rare and very early promotional documentary—made in 1911 and apparently unseen for 95 years—the school still subsisted entirely on private donations, and it seems likely that the film was used in its ongoing fund-raising campaigns.

The student body was primarily made up of first-generation daughters of new immigrants. “The immediate purpose of the school was to train the youngest and poorest wage-earners to be self-supporting as quickly as possible,” as the school’s director at the time of the film, Mary Schenck Woolman, put it in her 1910 book, The Making of a Trade School. The highest percentage of students, about one-third, were of Italian parentage, with significant numbers of German, Russian, French, and Jewish students.

In 1902, the founders of the school had conducted a study of the conditions of the city’s working women. They documented that wages for the youngest unskilled girls—already low, around $2.50 per week—were declining further with the influx of newer immigrants and that the increasingly regimented garment industry was providing its workers with almost no transferable skills. The school’s founders also worried that “the low wages of women are a direct temptation to vice” and prostitution. They concluded that there was work always available for young women with some training in dressmaking and other traditionally female trades.

The film opens with girls applying to the school and then entering at 209–213 East 23rd Street, where it had moved in 1906 and expanded to 500 students. The building and upgrade had cost the benefactors a substantial $185,000, with operating costs running $50,000 annually at the time of this film. No tuition was charged, and with so many immigrant families unable to support teenagers who didn’t bring in wages, the school inaugurated a “Students’ Aid” fund, awarding stipends to those from families “living on a per capita income of less than $1.50 a week.”

Most students started at age 14, with admission allowed up to 17. The program generally ran 11 months and, as documented in the film, introduced hand sewing, garment-manufacturing machines, paste-and-paper design, and women’s hat millinery. The school adapted to the students’ needs and provided an exercise program, seen in the film. “These girls live mostly in crowded localities of the city, where free exercise is unknown,” Woolman noted. The cooking classes here were begun in 1908 after a decision to feed destitute women thrown out of work by the 1907 financial panic. An intertitle notes that students study “factory laws,” and the unusual inclusion of “Tenement House Laws, Child Labor Laws, and Trade-Unions” in the curriculum reflects the activism of the founding reformers. At the end of each school year, an “Employment Bureau” apparently found jobs for all graduates and “occasionally” rescued girls from abusive workplaces.

In retrospect, the girls look trained for what would now be called dead-end jobs. It’s hard to envision the long-term employment benefit of the classes in “sample mounting” (gluing samples on cards or in books to be used by salesmen) or “novelty box making” (for gift packages and jewelry). Still, the school’s organizers were making fair assumptions. In the 1910s about half of all American women would spend between 3 and 10 years working outside the home, generally before the age of 25. Their assumption was that the Trade School’s students were training for jobs they would hold only for a relatively short time, presumably until marriage.

The founders set out to demonstrate that vocational “education could be practically undertaken by a public institution”—even if they had to spend their own money to prove it. In 1912, the Manhattan Trade School for Girls was folded into the New York public school system, where it remained the only one of the city’s four trade schools to admit females. In 1915, the city designed a building expressly for the distinctive needs of the school, two blocks away at 127 East 22nd Street, where it expanded to 900 students.—Scott Simmon

About the Music
The score for Manhattan Trade School for Girls by Elena Ruehr is composed for girls’ chorus and string quartet. One of its most novel aspects is the final credits sung by the chorus: ragtime music adapted from “Adaline Shepherd and May Aufderheide, played by members of the QX Quartet [Krista Reisner, Rohan Gregory, Peter Sulski, and Jan Müller-Szeraws] / Compiled by Carolynn Lindemann / Put together by Elena Ruehr / Sung by Lisa Taillacq’s Winsor School Small Chorus.” The last words ring out just as the film ends. Here is Elena’s account of the score’s composition:

“At first I was not excited at the prospect of doing a score for a documentary, but when I watched Manhattan Trade School for Girls I realized that it had an interesting narrative, showing the girls’ progress through the school (and in a larger sense, through life). Watching the scene of the students dancing, I thought of using a girls’ chorus—but the idea of taking the words directly from the film did not occur to me right away. At Marty’s suggestion, I looked at ragtime pieces by women composers and found three to adapt: ‘Pickles and Peppers’ and ‘Wireless Rag’ by Adaline Shepherd, and ‘Richmond Rag’ by May Aufderheide (all published between 1906 and 1910). I chose these partly for their contrasts and partly because they have appealing themes that are not difficult to sing.

“Early on I decided to combine the girls’ chorus with a string quartet, rather than piano, because I wanted a different blend of sounds. The quartet extended the voices while increasing the music’s complexity and drama. I tried to keep the vocal parts relatively simple, so the girls could concentrate on their sound and expression, and not be bogged down by counting and struggles with pitch; counterpoint, tricky rhythms, and richer harmonies were introduced through the strings.

“I decided to take all the lyrics directly from the film. I rarely attempt to write the words for my own music, but in this case the possible text was specific and limited, so I thought this was the best approach. Then I designed a musical structure, figuring out where the big changes and dramatic high points should fall (based on golden ratio calculations). I transcribed the ragtime themes for chorus and string quartet and began fitting the tunes with the words. Early on, the combination of words and music for the dance scene became one of my favorite moments.

“I was careful to balance feelings of contrast and continuity. For example, for a ‘slow’ spot in the middle, I decided on a development section, where the music peaked in complexity and tension. Eventually, the music fell into this form: introduction, themes introduced (in limited keys), development, condensed recapitulation of themes, with a new theme inserted for added energy, and a coda that mirrored the introduction. All in all, writing the score felt like creating a three-dimensional jigsaw puzzle for which all the pieces finally fit together.”

Indeed they do. This film may have languished unseen for nearly a century; henceforth it is sure to be remembered, with Elena’s score, as a fascinating demonstration of audiovisual counterpoint. A special thank-you for the contributions of Lisa Taillacq, the 22 chorus members, and the administrators of the Winsor School.—Martin Marks

About the Preservation
Manhattan Trade School for Girls survived as a 28mm print and was restored to 35mm by George Eastman House through a Save America’s Treasures grant administered by the National Endowment for the Humanities and the National Park Service and with additional funding from the National Film Preservation Foundation. Films in 28mm were printed on nonflammable, diacetate plastic and often screened in schools and other nontheatrical venues.

The motion picture department has a diverse collection, including many films that survive only in rare 28mm prints. Special strengths are early films from France, Britain, and the United States, avant-garde cinema, and American features. Eastman House’s extensive nitrate collection is stored in the Louis B. Mayer Conservation Center, established in 1996. The museum hosts an active film screening program in its Dryden Theatre.