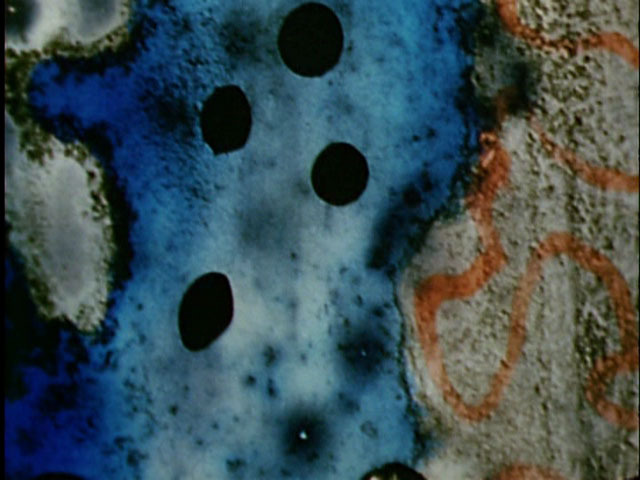 By the mid-1950s San Francisco was an avant-garde boomtown. Young filmmakers honed their skills in classes at the San Francisco Art Institute, and screenings—especially those in the San Francisco Museum of Modern Art’s “Art in Cinema” series (1946 to 1954) and the “Vortex Concerts” at Golden Gate Park’s Morrison Planetarium (1957 to 1960)—nurtured an audience. Some artists fused filmmaking with jazz and poetry in a distinctive San Francisco style. By 1959, avant-garde film was sufficiently well established that it could inspire the spoof Odds & Ends.

Little has been written about its maker, Jane Conger Belson Shimane (1927–2002). Her distributor, Creative Film Society founder Robert Pike, considered Belson Shimane the “most gifted talent” of the “new San Francisco group,” having a “formal background in art plus the graphic sensibility of an artist.” Born in Missouri, she studied at the San Francisco Art Institute and married Jordan Belson, the University of California–trained painter who took up abstract animation and exhibited as part of the “Art in Cinema” series as early as 1947. Belson Shimane premiered her first film, Logos, in 1957, the same year that her husband created the “Vortex” light shows with sound artist Henry Jacobs. Featuring an electronic score by Jacobs, her animated work played at festivals in North America and Europe and toured Latin America through the United States Information Agency. Belson Shimane followed up with Odds & Ends and by 1960, had three more films under way. She seems to have stopped filmmaking with the end of her marriage.

Odds & Ends is a sly comment on the collage film and Beat culture. To discarded travel and advertising footage found at a local film laboratory, Belson Shimane added a mélange of animation—assemblages, cutouts, color fields, and line drawings—and faux hipster narration by Jacobs (credited via the anagram Rheny Bojacs) punctuated by a bongo backing. Strung together with doublespeak and non sequiturs, the monologue skirts the edge of nonsense as Jacobs waxes on about poetry, jazz, “reaching the public,” “having a good time,” and—although “money doesn’t count”—the “possibility of subsidy” through grants. Footage of champagne, tropical beaches, and exotic peoples intermingle with rhythmic drawings and stop-motion flights of fancy. The visuals race on through dazzling transformations, both amplifying and undercutting the patter.

In 1960, Odds & Ends won a Creative Film Award, a cash prize presented by the film society Cinema 16 and the Creative Film Foundation, the New York nonprofit developed by Maya Deren to encourage experimental filmmaking. Among the other winners that year were Robert Breer, Bruce Conner, Ed Emshwiller, and Stan Vanderbeek. Commenting on the award, Belson Shimane remarked, “I don’t know just what to say other than I have been extremely impressed with the works of other film makers and ‘I just got high and put it together.’”

About the Preservation
Working from the filmmaker’s original materials, the Academy Film Archive created a preservation negative, a sound track negative, and viewing prints.