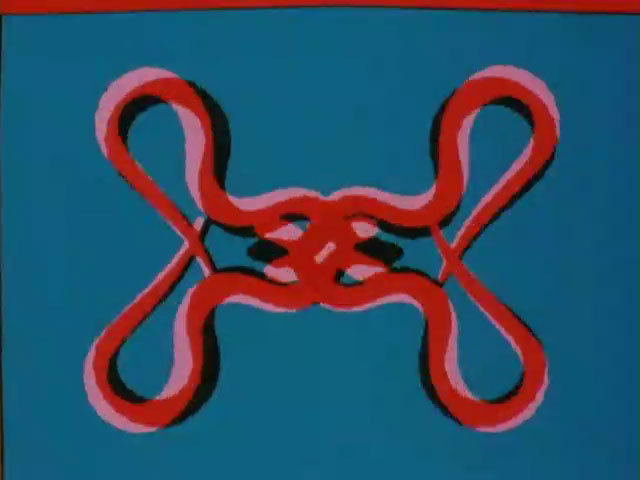 OffOn is a landmark avant-garde film, the first to fully merge video with film. Scott Bartlett’s goal was to “marry the technologies” so that neither would “show up separately from the whole.”

The production process also seamlessly married high tech with the hand tooled. In a borrowed Sacramento television studio, Bartlett fed through a telecine a selection of black-and-white, high-contrast 16mm film loops that he and Tom DeWitt had created for a multi-projector light show. Simultaneously Bartlett used a television camera to capture other film loops and portions of a light show rear-projected onto a screen. He mixed and superimposed these two video sources in real time, adding color and often oversaturating the image to give it a burned, halation effect, and filmed the results off a TV monitor (at 30 frames per second to eliminate flicker). This initial pro­cess took only three hours. He then optically printed much of this footage frame by frame, while also creating complementary images solely on film. Finally, to intensify the weaker colors of video, he painstakingly dyed the film strips with food coloring. OffOn thus also marries free improvisation to systematic craft.

In his mastery of optical printing, Scott Bartlett is heir to a personal avant-garde tradition seen at its origins in America with Watson and Webber’s The Fall of the House of Usher. How­ever, like those of other northern California filmmakers of the 1960s and 1970s, Bartlett’s abstractions grew not from literary narratives but from natural images: faces, bodies, birds, landscapes. OffOn opens with a close-up of an eye and demands a new way of seeing. The pulsating visual rhythm implied by the title OffOn is reinforced by the hypnotic sound design, beating like an industrial heart. Inherent limitations of video are used to build an abstract pixeled pattern. What Bartlett found even more appealing about video was that it lent itself so much better than film to “metamorphoses,” to transitions from one state of being into another.

Scott Bartlett’s career as an independent filmmaker, univer­sity teacher, and special effects creator for mainstream features was cut short by his death in 1990 at forty-seven. Speaking in the 1960s at the time he made OffOn, his second film, he saw a technology on the horizon that would make his innovations simpler for future media artists: “With video plus computers you could do it even better,” he said of his imagery of metamorphosis. He encapsulated his career with deceptive modesty: “There’s a pattern in my film work that could be the pattern of a hundred thousand movies. It is simply to repeat and purify, repeat and synthesize, abstract, abstract, abstract.” —Scott Simmon

About the Preservation
OffOn was donated to the Pacific Film Archive by Scott Bartlett and preserved in 1999 through Treasures of American Film Archives funding. The PFA used an original Ektachrome print to match the film’s vibrant, nonnaturalistic colors.