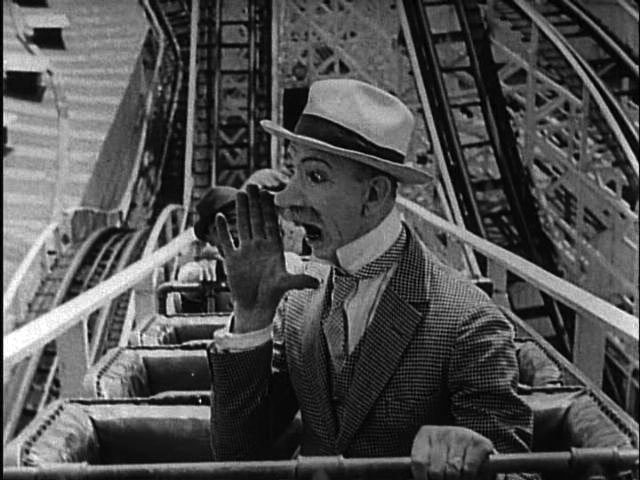 Oh! What a Day! is the third offering in Universal’s popular series inspired by The Gumps, the comic strip created by Sidney Smith in 1917 for the Chicago Tribune. With a clueless husband, a long-suffering wife, and an irrepressibly mischievous kid, this funny paper strip about the misadventures of an ordinary American family became an overnight hit. Soon it appeared in newspapers across the country, creating a built-in audience for the first movie spin-offs, one-reelers released between 1920 and 1921, combining live action with brief animated sequences.

In 1923, The Gumps moved up to two-reel live-action comedies, with former Keystone Cop Joe Murphy as the chinless lead, pioneering comedienne-producer Fay Tincher as Min, and Jack Morgan as the rascally Chester. Slim Hamilton appears as Andy’s wealthy Uncle Bim, a relative nearly as hapless his nephew.

In this episode, the comedy begins with the announcement of Min’s tenth anniversary gift from Uncle Bim—a “tin” flivver. Primping for a family outing in the new car, Min breaks a mirror due to her son’s shenanigans. “That’s seven more years of bad luck, Chester,” she scolds. The rest of the action—in a hotel, on the road, and at the beach—proves her right. Angelinos will take delight in the scenes filmed at Ocean Park’s Lick Pier, just months before it was destroyed by fire. After the amusement park went up in smoke on January 6, 1924, all that was left was the outer loop of the Giant Dipper, seen as Andy turns the corner on the Zip roller coaster.

Given the comic strip’s devoted fanbase, it is no surprise that exhibitors classed the Gump comedies as guaranteed “money-getters.” But also contributing to its success was the comic flair of Joe Murphy and spot-on direction of Norman Taurog, who directed the early Gump episodes and went on to make the classic Jerry Lewis and Elvis Presley films.

Oh! What a Day! is a textbook demonstration of the complexities of film identification. The opening title credit does not survive. Based on the introduction showing Sidney Smith at the drawing board, and the early intertitle mentioning Uncle Bim’s present to Min, we had originally assumed that this New Zealand discovery was the series opener, Uncle Bim’s Gift. But in writing the film note, we found that the plot did not match the report in Exhibitor’s Trade Review. Using the Ocean Park fire as an end date, we tried finding summaries of the other 1923 episodes but turned up nothing. So we asked for help from ace film researcher Zoran Sinobad of the Library of Congress. Zoran found the copyright description and clinched the identification. Oh! What a Day! is the earliest Gump two-reeler known to survive. Hats off to you, Zoran!

About the Preservation
Oh! What a Day! was preserved in 2013 at Film Technology, Inc. from a 35mm nitrate release print found at the New Zealand Film Archive. The work was supervised by George Eastman Museum and funded by Universal Studios. Thank you!