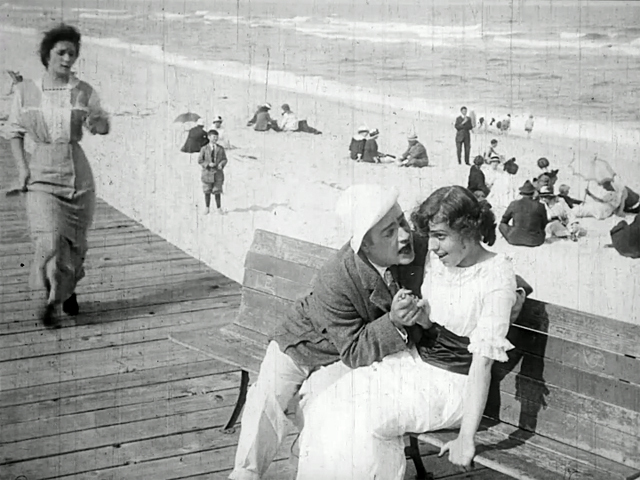 Despite a surge of interest and research in recent decades, the period of film history now understood as “early film” remains, in many respects, a vast and intriguingly uncharted territory. Not only are a majority of the early films lost, but many of those that survive are difficult to appreciate today. A sense of hindsight is no help in assessing these pictures; produced before the conventions of cinema were established, they often refuse to fit into the convenient categories that we recognize today.

The advent of the motion-picture serial is a case in point. By 1914 serials had become a regular part of the movie program, and The Perils of Pauline, perhaps the best-remembered example of the genre, was released during the course of that year. But numerous other serials, produced around the same time, stubbornly refused to fit the stereotype. The NFPF’s Treasures DVDs have offered examples of episodes from The Hazards of Helen and The Active Life of Dolly of the Dailies, all offering self-contained stories without the expected cliffhanger endings. And late in 1914 the Lubin company inaugurated a series that challenged latter-day preconceptions still further: a comedy serial.

The series was titled Patsy Bolivar, and it was the brainchild of scenarist Clay M. Greene. A former playwright, Greene had enjoyed middling success in the Broadway theatre over a thirty-year career before turning to the movies. By 1913 he had joined the Lubin forces. There he wrote the scenarios for a widely varied range of dramas, fantasies, and comedies, his name featured prominently in the films’ publicity. At least once he also appeared onscreen: for Through Fire to Fortune (1914) he wrote himself a colorful role as a financier whose suicide set the rest of the plot in motion.

For Patsy Bolivar, Greene took a different tack. The word “patsy” had already acquired its slang meaning by 1914, and the unifying thread of this series of one-reel episodes was simply the story of an unlucky individual. Lubin publicity announced: “‘Patsy’ has become the synonym for one in bad luck, and poor young Bolivar has more than his share.” The serial was launched in December 1914 with a story set in young Patsy’s school days, and continued through the following spring, when the final episode title, Patsy Married and Settled, summed up the resolution of the story.

The discovery and restoration of a nearly-complete tinted print of Patsy’s Elopement, the ninth of the fourteen episodes, gives us a glimpse of this story at about the midpoint. As this episode begins, the basic situation of the story has already been well established: the long-standing enmity between Patsy and his rival Sikesy, his pursuit of Sikesy’s sweetheart Tilly (apparently for the sole purpose of further antagonizing his enemy), and his corresponding failure to notice Jane, Sikesy’s sister, who loves him (Patsy, that is) and constantly bails him out of the predicaments into which he blunders in one episode after another. The present print was missing two short scenes and had Dutch intertitles, but the Library of Congress, in the course of its restoration, has translated the titles and provided bridging text to explain the missing action.

Thus restored to view, Patsy’s Elopement casts an oblique sidelight on the state of film comedy in 1915. Advance trade-press publicity informed readers that Patsy’s adventures were “excruciatingly funny”; today’s viewer may reach a different conclusion. The opening scene in which Patsy throws his rival off a second-story balcony, apparently causing serious injury, is no episode of Keystone slapstick but is played straight, as if for dramatic effect. Our best clue that this film is even intended as a comedy is the broad mugging of Clarence Jay Elmer, a regular member of the Lubin stock company, as Patsy.

Then again, in February 1915, when Patsy’s Elopement was released, film comedy in general was in an early evolutionary state. Chaplin was just coming off his extraordinary year at Keystone and embarking on the second phase of his career at Essanay, but had yet to produce any of the films that are recognized today as classics. The Golden Age of Keaton, Lloyd, and the other great comics was still years away. For the time being, the outright rough-and-tumble slapstick comedians shared the landscape of screen comedy with “polite” comedians like Mr. and Mrs. Sidney Drew, who aimed for smiles and chuckles from audiences rather than belly laughs. Here Greene takes the latter course, relying on the mishaps of the eloping couple and their pursuers to furnish droll situation comedy.

Lubin, based in Philadelphia (and proudly featuring the Liberty Bell in its logo), had been an important production company during the days of early film, but by the time Patsy Bolivar appeared it was on its last legs. The company came to the verge of bankruptcy later in 1915, and within two years had been dissolved.

About the Preservation
Patsy’s Elopement was preserved in 2015 at Colorlab Corp using a 35mm nitrate print from EYE Filmmuseum. The intertitles were translated from the Dutch and are modern recreations. The work was supervised by the Library of Congress with funding provided by the National Film Preservation Foundation.