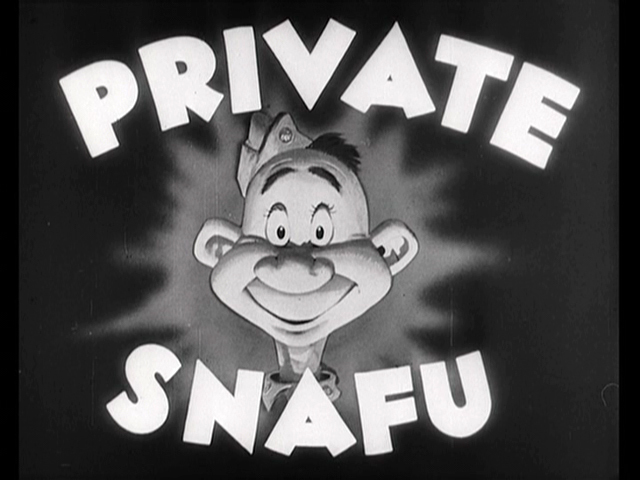 To download a copy of the film, right-click HERE and save to computer.

Without rival, the zaniest U.S. government films are the Private Snafu cartoons. Released between 1943 and 1945 to World War II personnel, the Snafu series was a regular part of the Army-Navy Screen Magazine, an anthology of entertainment and information.

The word “snafu” had entered the language at the start of the war as an obscene acronym that spread rapidly among enlistees: “s(ituation) n(ormal), a(ll) f(ouled)”—a euphemism—“u(p),” as Webster’s politely puts it. Private Snafu regularly “f***ed up” in outlandish ways that connected with soldiers and taught military lessons. “Spies,” from August 1943, imagines what can happen when a blabbermouth un­knowingly spills military secrets. It’s the animated equivalent of a LOOSE LIPS SINK SHIPS poster.

It is hard to imagine a more ideal team than the one that created “Spies” at Warner Bros. for the army. Chuck Jones, who directed twelve of the twenty-six Snafus, was also beginning to turn out the greatest Bugs Bunny and Daffy Duck cartoons. The rhyming dialogue of “Spies” bears the distinctive note of its writer, Theodor Seuss Geisel, better known as “Dr. Seuss.” Mel Blanc, the voice behind almost all of the Warner Bros. characters, said that he gave Private Snafu a voice like Porky Pig’s because he found them similarly hapless. The army allowed the cartoonists wide latitude. As Jones describes it, “Storyboards had to be approved by the Pentagon, but it was fairly loose and we did throw in a lot of business. Of course, Geisel was fun to work with.” (Jones would go on to produce Dr. Seuss’s How the Grinch Stole Christmas [1966].)

From the Snafu title onward, these cartoons escaped Hollywood’s Production Code propriety. Among “Spies”’ savory touches, permitted only for military audiences, are the voluptuous Nazi’s breast radios and the language of Private Snafu’s question, “Now who in hell do you suppose it was who let my secret out?”—as well as the answer he gets: his mirror image as a horse’s ass. —Scott Simmon

Further Reading
The political cartoons that Theodor Geisel penned shortly before he wrote “Spies” (and at least two other Snafus) are collected as Dr. Seuss Goes to War (New Press, 1999). Chuck Jones’s witty, illustrated memoir is Chuck Amuck: The Life and Times of an Animated Cartoonist (Farrar, Straus & Giroux, 1989).