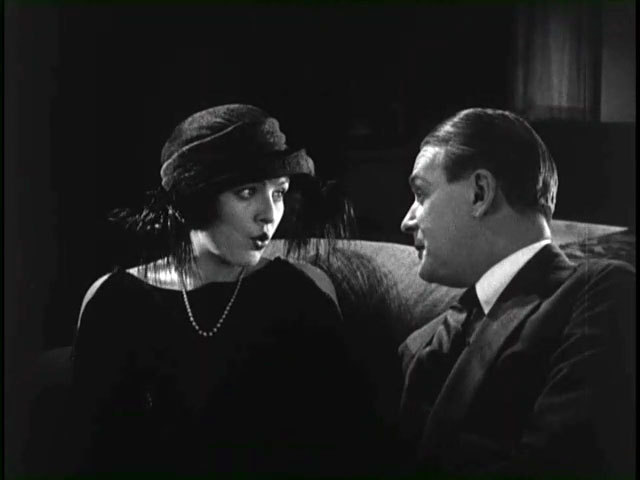 “Youth chained to a house of decay, like a racing motorboat tied to an old crumbling wharf.” So begins the surviving reels of Reckless Youth, a cautionary tale for aspiring flappers produced in New York by Selznick Pictures before its big move to Hollywood.

The movies and the flappers were made for each other. Children of the cinematic serial queens and real-world suffragettes of the 1910s, the freewheeling young ladies of the Roaring Twenties were both models for and consumers of their sensationalist silver-screen reflections. From the irrepressibly plucky Olive Thomas in The Flapper (1920) to the dangerously seductive Louise Brooks in Pandora’s Box (1929), the film flapper embodied the attraction and alarm evoked by the modern girls of the 1920s.

This conflict was a frequent theme in the work of Cosmo Hamilton, whose short story was the source of Reckless Youth. Although forgotten nowadays, Hamilton was one of the most popular and controversial writers of his time. He was known for his frank examinations of the thorny issues facing this new generation of independent-minded women. Hamilton’s 1912 play The Blindness of Virtue was a plea for sex education, and his serialized novel Scandal (adapted to the screen by Selznick Pictures in 1917) explored the complications arising from the breakdown of traditional courtship. Exhibiting both brotherly sympathy and fatherly concern for his heroines, Hamilton leavened his morality plays with generous dollops of humor and a hip attention to current trends in youth culture.

Reckless Youth repeats Hamilton’s successful formula. The missing first reel sets up the story of a young girl expelled from convent school and forced to live in the suburbs under the scrutiny of her aging aunt and uncle. There she finds a confidante in a vacationing New York City bachelor who offers her a way out from her confinement.

While Film Daily faulted the movie for its weak plot, slow action, and preachy titles, Exhibitors Herald called it “a thoroughly delightful little flapper story” and made note of “the occasional double meaning sub-titles characteristic of a Cosmo Hamilton story.”

Even though Reckless Youth was a no-expenses-spared vehicle for Elaine Hammerstein, Selznick’s “Star Without a Failure” (and also the cousin of Broadway legend Oscar Hammerstein), it is another actress who steals the show: Constance Bennett, making her motion picture debut as the chorus girl Tootles. In her brief scene, Bennett gives a spot-on performance as a seasoned flapper and—though silent—prefigures the fast-talking dames to come in the films of the 1930s.

About the Preservation
The surviving reels of Reckless Youth were preserved under the direction of George Eastman Museum from a 35mm tinted nitrate release print found at the New Zealand Film Archive. The work was completed in 2011 by Colorlab Corp. through the support of a Save America’s Treasures grant secured by the NFPF.

Further Viewing
The film flapper in all her varied manifestations is abundantly represented in the NFPF’s Treasures from American Film Archives DVD series. See for example, Clara Bow in Mantrap (1926), Betty Compson in The White Shadow (1924), Lina Basquette in The Godless Girl (1928), and even the giggling neighborhood girls dancing the Charleston in the home movie collection Japanese American Communities (1927–32).