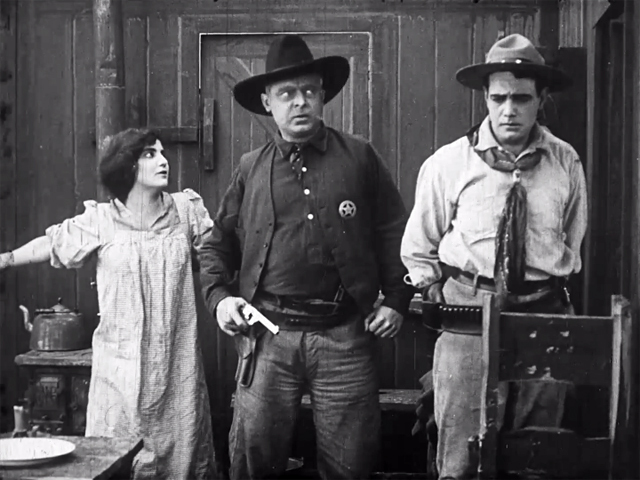 “A Western picture above the average Western” was The Moving Picture World’s weary praise for the Lubin Company’s Red Saunders’ Sacrifice at its release in October 1912. The anonymous reviewer could be forgiven for finding its story familiar. In the old West, a wanted outlaw (Edgar Jones) shelters a young woman (Clara Williams) and her mother after their cabin burns, then risks his freedom when he rides to town to seek a doctor for the ailing mother.

Westerns of all varieties were flooding movie houses and accounted for at least a fifth of all U.S. releases over the previous three years. Newly popular among them were stories like this one, centered on “good badmen”—outlaws with hearts of gold, especially when faced with pleas from women, children, or the family. The cycle was reaching its peak around the time Red Saunders’ Sacrifice was released, thanks to the growing popularity of Gilbert M. Anderson’s “Broncho Billy” character, fully introduced as a redeemable badman in 1911 one-reelers from the Essanay Company. Anderson shifted the outlaw character away from Jesse James–style social banditry and toward Robin Hood–style illegality that typically aided the downtrodden, though Broncho Billy’s charm also came from his never being wholly virtuous. Other film studios lost little time in copying the character. The new Santa Monica, California, branch of Vitagraph Company made quite a sideline in these stories in 1912, including The Redemption of Red Rube (released in July), A Wasted Sacrifice (in September) and The Better Man (in December). (This is to cite only titles that can now be easily viewed. The Better Man—in which another outlaw risks arrest by seeking a doctor after a young woman’s plea—was repatriated by the NFPF from the New Zealand Film Archive and is in the NFPF’s Treasures 5: The West DVD set. Unrestored versions of the other two Vitagraph films, still with Dutch intertitles, have been made available by the Netherlands’ EYE Filmmuseum at the online links above.)

Red Saunders’ Sacrifice is a relatively rare surviving Western from the Lubin Film Manufacturing Company. Based in Philadelphia, Lubin was in 1912 one of the major film production corporations, although it would be essentially bankrupt by 1915, after failing to transition successfully to multi-reel features. Its founder, German émigré Siegmund Lubin, had in August 1912 purchased a 350-acre estate 20 miles north in Betzwood, Pennsylvania, just across the Schuylkill River from Valley Forge. The Betzwood estate was soon promoted as “Lubinville,” where this film was partly shot. After populating the estate with 300 head of cattle, 100 horses, and a “Western town,” it could pass for a woodsy West.

Lubin released over 300 films in 1912, but of these a mere 17 are known to survive in U.S archives. The EYE Filmmuseum holds at least 7 more, including Red Saunders’ Sacrifice, now restored and preserved at the Academy Film Archive in Los Angeles through this NFPF project. To turn out these 300 films, the Lubin Company had in 1912 eleven separate production units, each overseen by a producer–director. Lubin’s most fascinating and unconventional Westerns this year came from the unit based in Las Vegas, New Mexico, under Raymond Fielding. Sadly, almost all of those Southwest films are lost. The unit responsible for Red Saunders’ Sacrifice, one of the last production units to still shoot Westerns in the East, had been formed in July under Francis J. Grandon, who styled himself “Frank” Grandon as he directed more Westerns. (Curiously, he and the two stars of Red Saunders’ Sacrifice—Edgar Jones and Clara Williams— can be seen setting up yet another cabin-burning scene for a different Western the same month in a production photo featured in the trade journal Motography; October 12, 1912.) Grandon must have received a little master class in directing while acting under D.W. Griffith in more than 90 one-reelers at the Biograph Company from 1909 through 1911. In early 1912 he abandoned acting for directing, first in Los Angeles for Carl Laemmle’s IMP Company. His new East Coast Lubin unit was built around the two stars here. Edgar Jones entered films only in spring1912 but had often played a cowboy on stage and was soon promoted for “his splendid horsemanship…. He likes the out of door, the rough and ready life, which photoplay work gives him.” Clara Williams, labeled “the crack female rough rider of the Lubin Company,…a whirlwind,” had more experience in the Western genre, entering films in 1910 to co-star with Gilbert M. Anderson in 30 of his pre-Broncho Billy films. After leaving Lubin, she would be paired in eight films with another major Western star, William S. Hart. Indeed, Clara Williams is the female lead in three of the most accomplished surviving early five-reel features: The Bargain (1914) and Hell’s Hinges (1916) with Hart, and the immigration drama The Italian (1915).

The climax of Red Saunders’ Sacrifice rests on a coincidence strained even for the era. The town sheriff has been mooning in his office over a bundle of letters and a locket portrait of a long lost love. After he rides to the outlaw’s cabin to arrest him, he’s stunned to discover his lost sweetheart is the mother, who is, alas, already dead. On understanding that the outlaw tried to save her, the sheriff frees him—but the outlaw gets only as far as his cabin door. A deputy’s six-gun convinces him to surrender. At least in comparison with other Lubin Westerns—which tend toward the grimly fatalistic—it’s an upbeat tale. Prison time for the outlaw is covered in a single intertitle; then he’s back to start a new life with the young woman, blessed by the sheriff and pausing only to pay last respects at the mother’s grave. (The Lubin Westerns shot in New Mexico were harshest—the key surviving title is The Rattlesnake: A Psychical Species [1913]—but so too were such Eastern-lensed ones as The Renegades [1912], which ends with Clara Williams’s character kneeling at her husband’s grave.) True, the acting in Red Saunders’ Sacrifice is unsubtly presentational, but compensation comes in well-staged landscapes, notably a high-angle shot above a lake—for which the company seems to have travelled up the Hudson River to near Beacon, New York —as the outlaw helps the distressed mother into the foreground while the cabin burns far below. “A fine view,” The Moving Picture World called the shot. In this tinted restoration of a crisp surviving print, buoyed by Michael Mortilla’s spirited accompaniment, Red Saunders’ Sacrifice is, as the reviewer came around to admitting, “All very well done.”

—Scott Simmon is Professor Emeritus of English at the University of California, Davis, and curator of five of the National Film Preservation Foundation’s DVD anthologies. His books include The Films of D.W. Griffith and The Invention of the Western Film.

About the Preservation
Red Saunders’ Sacrifice was preserved in 2015 at Colorlab Corp using the only known surviving element: a tinted 35mm nitrate print from EYE Filmmuseum. The intertitles were translated from the Dutch and are modern recreations. The work was supervised by the Academy Film Archive and funded through a National Endowment for the Humanities grant secured by the NFPF.

About the Music
The new music for this presentation was composed and performed by Michael D. Mortilla. Michael has been composing professionally for more than four decades and has accompanied silent film screenings throughout the United States. Among his many NFPF projects are the accompaniments for the DVDs Treasures 5: The West and Lost and Found: American Treasures from the New Zealand Film Archive. The score for Red Saunders’ Sacrifice was improvised in one continuous “take” in order to recreate the live experience of an audience at the time of the film’s original release. According to Michael, “the creative process involves running through the film repeatedly, recording most of the performances. A typical piano solo for a one-reeler like this usually requires about 14 takes to arrive at the final musical work. There is little to no editing of my performances, and absolutely no editing of the score’s overall structure.”