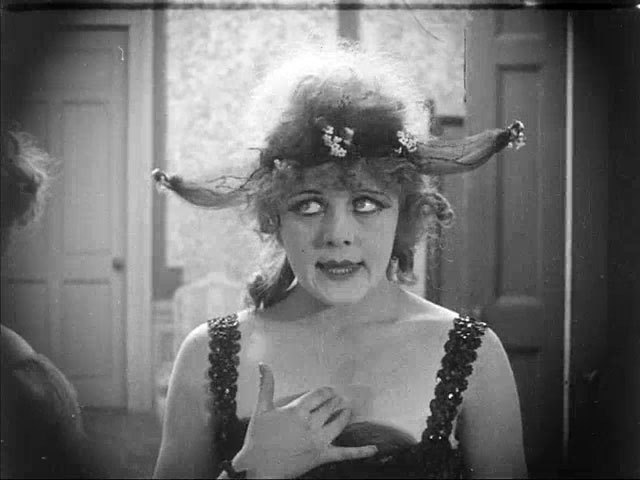 Rips and Rushes is one of the many Vitagraph shorts directed in 1917 by slapstick comedian Larry Semon (1889-1928). Son of a magician, Semon had broken into show business as part of the family act, leaving the stage in his early teens to train as an artist. After graduating, he worked in New York City as a newspaper cartoonist while moonlighting in vaudeville. There he was discovered by Vitagraph. The film studio proved a good fit for the energetic Semon, who was equally at home behind and in front of the camera.

The comedian’s big break came later in 1917 when Hughie Mack (the plump dance instructor in Rips and Rushes) left Vitagraph. Semon soon took on leading roles and established a screen persona as a goofy klutz who spread chaos everywhere. Moving up from one- to two-reelers in the early 1920s, he became so well known to screen audiences abroad that he had pet names in Spanish, Italian, and French. His gags grew ever more extravagant until Vitagraph finally insisted that he bankroll his own films. Semon struck out on his own, pinning his hopes as director-producer-writer on his 1925 feature-length adaptation of The Wizard of Oz, in which he also starred as the scarecrow. But the film flopped, escalating financial ruin. He returned to vaudeville in 1928 and died just a few months later.

While Semon does not star in Rips and Rushes, its confident gags and frenetic pace suggest his touch. In the knockabout one-reeler set in a dance studio, three suitors compete for the girl. James Aubrey, the actor playing the father’s preferred suitor, may look like a Chaplin imitator, but he came by those skills honorably, born like Chaplin in Britain and likewise coming to the U.S. with Fred Karno’s troupe. Nevertheless it’s Alice Mann, with her wacky headdress and knowing glance, who steals the show. Suffice it to say that many vases are broken and pants ripped before she escapes out the window with the handsomest of the beaus. If this 1917 comedy looks routine today, remember that its director also wrote or acted in some 35 additional Vitagraph films in the same year!

About the Preservation
Rips and Rushes was preserved under the direction of the Library of Congress from a nitrate print uncovered at the New Zealand Film Archive. The work was completed in 2013 by Colorlab Corp. through the support of a Save America’s Treasures grant secured by the NFPF.

Further Viewing
Semon’s 1925 version of The Wizard of Oz is among the extras included on Warner Bros. blu-ray “Emerald Edition” 2009 reissue of the 1939 classic.