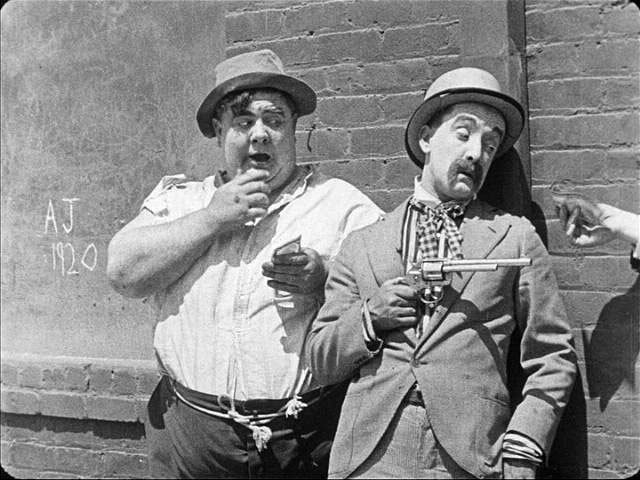 Run ’Em Ragged stars comedian Snub Pollard (1889–1962), known in trade paper ads as “that funny little fellow with the large mustache.” Born in Melbourne, Australia, as Harold Fraser, he took the name Pollard upon joining Pollard’s Lilliputian Opera Company and toured with the Australian vaudevillians in America. He went into movies through the Essanay Film Manufacturing Company and did a stint with Mack Sennett’s Keystone Cops before landing the role of Harold Lloyd’s sidekick at the Rolin Film Company in 1915. He continued as a reliable foil when Lloyd moved over to his “glasses” character and a more realistic comic style.

“It isn’t so surprising that Lloyd is going over so big in his new work,” commented Lloyd’s producer Hal Roach in 1918. “I firmly believe the vogue of screen comedians who depend largely upon grotesque make-up…is going out.” Nevertheless when Lloyd was sidelined by an accident in 1919, Roach turned to Pollard, whose make-up—whiteface, arched eyebrows, and oversize, upside-down Kaiser Wilhelm mustache—harked back to his Keystone roots. Over the next five years Pollard headlined in a series of one and two-reel comedies for what became in 1920 the Hal E. Roach Studios.

Pollard’s character proved less memorable than his make-up. Unable to develop the newer comic style exemplified by Lloyd, he left the studio shortly after It’s a Gift (1923)—his now famous short about an eccentric inventor and his magnet-propelled car—and faded into lower-budget shorts and bit roles. Roach weathered his departure, as well as Lloyd’s, and in 1927 hit pay dirt by pairing Stan Laurel and Oliver Hardy.

About the Preservation
Run ’Em Ragged was preserved under the direction of the Library of Congress from a nitrate print discovered in 2010 at the New Zealand Film Archive. The work was funded through the support of a Save America’s Treasures Grant secured by the NFPF.