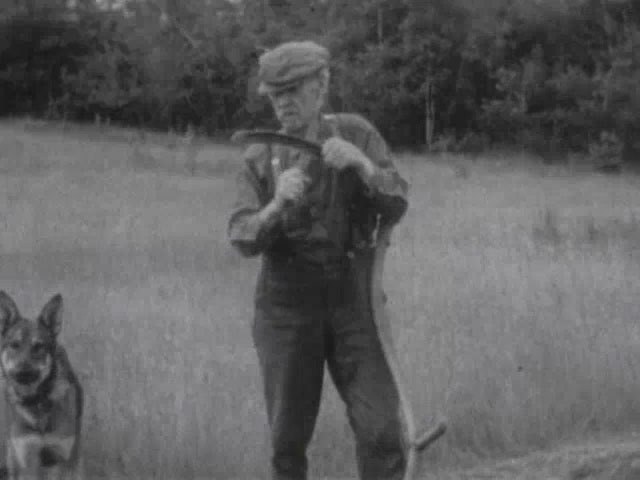 While professional cinematography was becoming a male enclave, magazine ads for amateur movie cameras in the 1920s were promoting filmmaking for women through images of women filming their families and nature. If those were limitations, Elizabeth Woodman Wright (1885–1961) nonetheless filmed domestic rural life with a grace rare among even professional cameramen.

In 1928, Wright bought a 16mm Kodak movie camera and over the next six years sketched her family’s summer farm with the eye of a landscape artist. The two sequences reproduced here come from the same reel, probably taken in the summer of 1930. The flag flapping briskly in the first shot underscores the Wrights’ name for their farm, “Windy Ledge,” located inland in southwestern Maine, in the town of Paris. The scenes of clearing fields and woods, harvesting hay with horse-powered machinery, and shingling the barn capture everyday work and also a sense of play from the children who assist.

Maine farming had been in decline since the 1880s—in numbers both of farms and of acres under cultivation—and these elegiac images document disappearing practices. The tie-clad supervisor may now suggest Way Down East’s squire come to life but also represents a genuine regional tradition of self-sufficient small farming. The fiddler seen briefly was a renowned figure, Mellie Dunham (1853–1931), who toured the Keith Theatre circuit in the mid-1920s after retiring as an expert snowshoe maker in nearby Norway, Maine. —Scott Simmon

About the Music
For this gentle and touching amateur documentary, I relied almost entirely on traditional songs and dances, many widely known to residents of Maine. The exceptions come at the beginning and end: For the flag raising and lowering it seemed natural to play the customary bugle call “To the Colors.” The subsequent music commences with Maine’s state song—“State of Maine,” by Roger Vinton Snow—followed by “The Dearest Spot on Earth” (W.T. Wrighton) and moves to several other poignant tunes, all heard in passing, to sustain the mood.

When the second sequence begins, the music is enriched by a country fiddle (played by George Ruckert). The prime inspiration for adding this instrument, of course, is the footage of Mellie Dunham, featured later in the sequence. We begin with Stephen Foster’s “Annie Laurie,” as the family celebrates an elderly woman’s birthday outdoors. Two traditional fiddle tunes are later heard, one a jig (“Jackson’s Morning Brush,” while the fiddler plays), the other a reel (“Pat’nella,” for the shots of a woodsman hauling logs). When the footage changes to a landscape panorama at day’s end, we round things off with a reprise of “The Dearest Spot on Earth.” Like “Annie Laurie,” this song has such graceful simplicity that it nowadays conveys an almost aching nostalgia—as does much of the film, to the receptive viewer. There is a final humorous twist: a tiny epilogue, which the fiddler accompanies solo. He uses an appropriate tune that all who have lived in Maine must surely recognize. —Martin Marks

About the Preservation
The films of Elizabeth Woodman Wright were preserved by Northeast Historic Film through Treasures of American Film Archives, a millenium project organized by the NFPF and supported by the National Endowment for the Arts.

Further Viewing
Northeast Historic Film distributes moving image media from New England, including many early films from its collection. Among available titles are the 1930 logging film From Stump to Ship, a 1920 record of Maine’s northernmost region, Aroostook County, and pre-1920 shorts compiled as Earliest Maine Films. The catalog, ordering, and membership information are online at the NHF website: www.oldfilm.org.