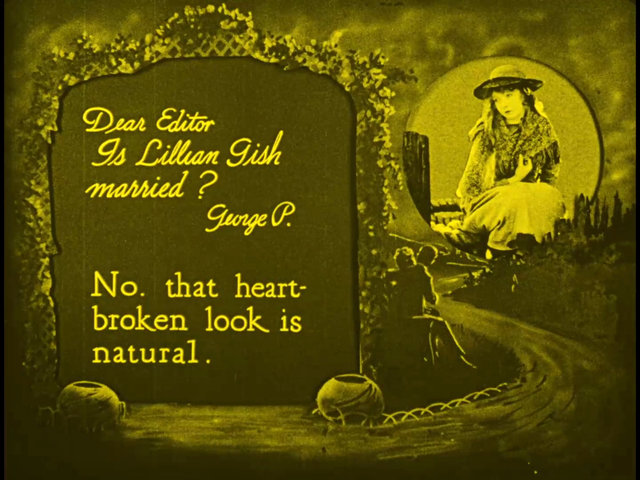 Screen Letter Box was a short-lived weekly series that was conceived by film exhibitor Morris Kashin and produced by future film mogul Jack Cohn, who would go on to found Columbia Pictures with his younger brother Harry in 1924. An advertisement in The Moving Picture World promised “something entirely new in short subjects… an elaborately produced and cleverly titled screen novelty answering the questions of the theatre patrons about their favorite plays and players, showing them how unusual scenes are made, satisfying their curiosity about every angle of the art….”

Kashin was a pioneer of the nickelodeon era who later managed a circuit of theaters in Montreal and was known for his innovations in the design of lobby displays. He moved to New York in 1917 to work for Fox Film Company. Cohn got his start at Carl Laemmle’s Independent Motion Picture Company, working as a laboratory assistant: printing, cutting, and editing film. After IMP was merged into the Universal Film Manufacturing Company, Cohn talked Laemmle into producing newsreels and became producer and editor of Universal Weekly.

In June 1919, Kashin and Cohn joined forces to found Screen Letter Box, Inc. with the intent of “giving to the exhibitor and public an attractive short subject, which at the same time advertises the theatre in which it is shown” (MPW, June 21, 1919). Kashin devised a novel idea for engaging both theater owners and their patrons: customized stationery—bearing the name of the theater—that moviegoers could use to write their questions and mail to the company. An ad for Screen Letter Box promised a “weekly prize for the best letter with the winner’s picture shown on the screen” in customized prints made for theaters showing the series (MPW, June 28, 1919).

The first issue of Screen Letter Box debuted in mid-July. In August, the company announced it was moving to a larger office space that included editing and projection suites, as well as “a large workroom, where the large volume of mail sent to Screen Letter Box can be properly sorted” (Motion Picture News, August 2, 1919). But in September, the trade magazines reported that Morris Kashin had bought out Cohn’s interest in the company, giving him entire control. Production of the series would now be made exclusively under Kashin’s direction, with plans to to double its running time. Instead, the company ceased production with the completion and release of Screen Letter Box No. 8 in mid-September.

Eight months later, Jack Cohn announced the debut of Screen Snapshots, produced by his newly formed company, the CBC Film Sales Corporation (later rebranded as Columbia Pictures in 1924). Cohn boldly declared that “the trade must not confuse ‘Screen Snapshots’ with any other film weekly now or ever on the market… although I expect imitators to be offering substitutes shortly. I have aimed to produced something really different, and if my judgment is correct I think I have succeeded” (Exhibitors Herald, May 1, 1920). Screen Snapshots would continue production until 1958 (two years after Cohn’s death), becoming the longest-running series of its kind. As they say, that’s show business!

About the Preservation
Screen Letter Box No. 7 was preserved by the George Eastman Museum through a 2013 grant from the National Film Preservation Foundation.

About the Music
The new music for this presentation was composed and performed by Michael D. Mortilla. Over the past five decades Michael has composed for Martha Graham, the 1996 Olympic Games, Chicago Symphony Orchestra, Library of Congress, Academy of Motion Picture Arts and Sciences, Academy Museum of Motion Pictures, Turner Classic Movies, UCLA, UC Santa Barbara, CalArts, NPR, PBS, the National Film Preservation Foundation, and a who’s who of theater, dance, film, and concert artists.