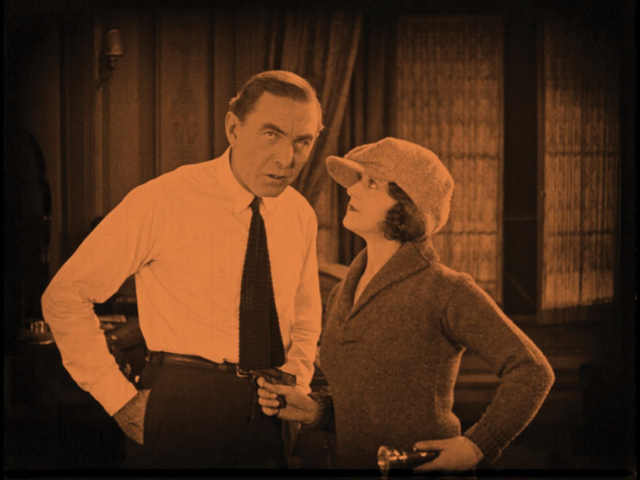 There’s an easygoing, friendly manner to actor Harry Carey. His smile, the wrinkle around his eyes, to say nothing of that aura of quiet inner strength, reminds one of John Wayne at his best—only Harry Carey was projecting those qualities from the screen when Wayne was still in high school. Carey made seventy-four feature films during the silent era and more than one hundred shorts, with an additional sixty-three roles, mostly character parts, in talkies through 1948. Today only fifteen of his silent features are known to survive complete, a third of them held in foreign archives. It’s a treat to have one of the missing resurface, especially in this beautiful tinted and toned restoration. A surviving nitrate print was found in the earliest stages of decomposition at the Czech Republic’s National Film Archive in Prague. Fortunately, the film was saved in time and no trace of deterioration is visible in the restored print.

The sixth film Carey made with independent producer Hunt Stromberg, Soft Shoes was a modestly budgeted independent production. Though set in San Francisco, it has only a single stock shot of San Francisco Bay with Los Angeles standing in for the rest of the exteriors (several of which have been examined by silent film locations expert John Bengtson). The film was made at a time when the careers of director Lloyd Ingraham and star Carey were in decline. Ingraham, aged fifty at the time of production, had started at Essanay both acting and directing. As director he shepherded Mary Miles Minter’s career before William Desmond Taylor inherited the task. By the mid-1920s, however, his directing career was winding down. He made one partial-talkie in 1930 and thereafter found himself confined to playing dozens of character roles and bits, mostly in low-budget westerns.

New York City–born Harry Carey had had a more significant run. Forty-seven by the time of Soft Shoes, his star was beginning to show some tarnish. A restless youth of many talents, Carey had written and starred in a play, Montana, which had a terrifically successful three-year national tour. He followed it up with a terrifically unsuccessful play that managed to lose Carey all the money he’d made on the first. He then switched to a film career, appearing alongside Henry B. Walthall, Mary Pickford, Blanche Sweet, and Lillian Gish under D.W. Griffith at Biograph. In 1914 Carey struck out on his own, writing, directing, and starring in two features, a crime drama, The Master Cracksman, and a seafaring tale, McVeagh of the South Seas. Two years later found him a rising star in Universal westerns, often playing bad men who are reformed by the influence of a good woman. It was there that he met a young actress named Olive Golden who starred opposite Carey in a series of films. They married in 1920 and the happy union produced two children, one of whom, Harry Carey Jr., later had his own film career. At Universal, Carey also met actor-director Francis Ford and Ford’s younger brother Jack, a Hollywood hopeful who had appeared in a dozen or so flicks. Carey convinced the studio to give Jack Ford a chance to direct pictures. Ford biographer Scott Eyman writes: “Carey was crucial in [John] Ford’s career. After they were put together grinding out westerns for Carl Laemmle, Carey vouched for the young man and the relationship became familial. For a time, Ford lived with Carey and his wife Olive. They’d write at night, shoot during the day.”

Over time, however, Ford’s irascible personality began to fracture their working relationship, though their friendship remained in tact. Ford left Universal for Fox in 1921 and, shortly thereafter, Carey started making films for the British company Robertson-Cole, a step down from Universal. The following year, Carey signed with Hunt Stromberg Productions, where he made Soft Shoes. At the age of twenty-two Stromberg had wrangled a job assisting Thomas Ince. Two years later he resigned in order to start his independent production company, quickly making a name for himself with budget productions of quality and distinction. By the time of Soft Shoes, Stromberg was on the verge of signing away this independence to become a top-tier executive at newly-formed MGM.

Carey knew dimple-chinned Lillian Rich from Universal where they had appeared together in 1922’s Man to Man (a lost film). Rich’s career had risen steadily but then leveled off in 1923, when she seems to have taken a break, most likely to shed a husband. She picked up again in 1924, playing opposite Jack Hoxie, Hoot Gibson, and Tom Mix in a herd of westerns and in films of general appeal starring Frank Mayo and Reginald Denny. Her career hit a new high when she headlined as the vamp in Cecil B. DeMille’s The Golden Bed, released a couple weeks after Soft Shoes opened.

Soft Shoes starts out like a typical western but takes a left turn when Sheriff Pat Halahan (Carey) realizes his gal is really only interested in his money. By the second reel, the sheriff and his trusty dog Hank are enjoying the sights at a swanky San Francisco cabaret. Hank has discovered a bottle of booze on the floor while Halahan has caught the wayward eye of a woman at the next table, to the annoyance of her husband. After Halahan returns to his room with his now inebriated canine, the otherwise peaceful evening is interrupted by the sound of soft shoes on the fire escape. In comes Faith O’Day (Lillian Rich), a cat burglar armed with pistol and flashlight who demands that Halahan cough up his dough. Halahan takes the threat surprisingly lightly and makes a one-dollar bet that he can return a brooch she stole earlier the same evening before its loss is discovered. Pulling off his boots to slip on his own “soft shoes,” Halahan sets off to do a little second-story work, not realizing the trouble he’s in for.

Carey’s career for the remainder of the silent era was a mix of starring roles in low-budget westerns and third- or fourth-billed supporting roles in A-pictures at MGM, The Trail of ’98 and Slide, Kelly, Slide. In 1929 Irving Thalberg approved Carey for the title role in the studio’s mammoth Trader Horn, shot in Africa. The troubled production was changed to a talkie midway through, and the final film wasn’t released until 1931. As the sound era settled in, Carey, now in his mid-fifties, became known for a series of character roles, including his Oscar-nominated performance in Mr. Smith Goes to Washington.

Carey passed on his tough-but-amiable legacy to another western icon, with whom he also happened to be great friends. According to Scott Eyman: “John Wayne had watched Carey’s westerns when he was a kid, and they worked together in The Shepherd of the Hills, Red River and two others. Wayne loved his natural quality, the way he wore his jeans in early westerns.” The year following Carey’s death in 1947, production began on John Ford’s 3 Godfathers, a story that Carey had filmed twice, in 1916 and again in 1919 with Ford at the helm. This time the cast included John Wayne and Harry Carey Jr. in his first starring role. Immediately after the main title a lone horseman rides up against an iridescent desert sunrise as another title fills the screen, “To the Memory of Harry Carey. ‘Bright star of the early western sky ....’”

—Hugh Munro Neely, director of the Institute for Film Education and several documentaries about silent film stars such as Clara Bow.

About the Preservation
No script or continuity for Soft Shoes is known to survive, so the film’s restored intertitles are based on a translation of the Czech titles from the only extant version, a 35mm tinted nitrate print held at the Czech Republic’s National Film Archive (Národní filmový archiv) in Prague. The color tinting reproduces the color scheme present in the nitrate source print. A partnership between Národní filmový archiv and the San Francisco Silent Film Festival, the project was made possible by a grant from the National Film Preservation Foundation.

About the Music
For more than 40 years Donald Sosin has brought his original silent film music to festivals in New York, Telluride, San Francisco, Denver, Seattle, Houston, Germany, and China. Donald accompanies silent films at New York’s Museum of Modern Art, the Museum of the Moving Image, and the National Gallery of Art and at universities including Harvard, Yale, UC Berkeley, and Emory. With his wife, singer Joanna Seaton, he has performed at the National Gallery and at Italy’s annual film festivals in Bologna and Pordenone. He has scored more than 35 silent film DVDs and received commissions from the Chicago Symphony Chorus, the San Francisco Chamber Orchestra, and the Colorado Children’s Chorus.