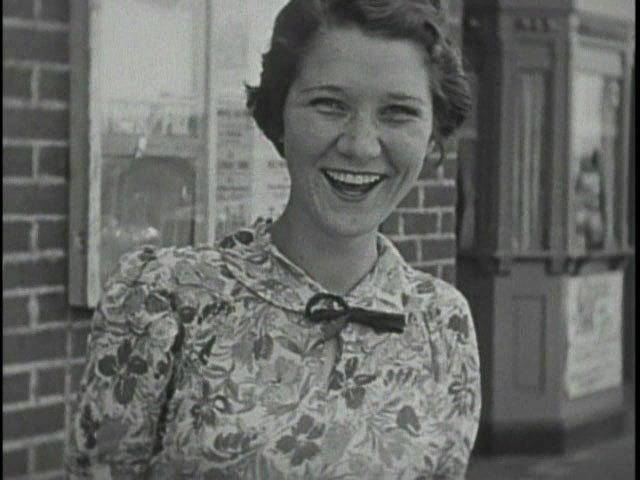 “With the Depression and hard times, people couldn’t justify spending much money,” reminisced H. Lee Waters, “but to be able to see themselves on the same screen with a movie star was irresistible.” The itinerant filmmaker spoke from experience, having made a living filming more than 118 small communities in the Carolinas, Virginia, and Tennessee in the 1930s and 1940s for his town portrait series Movies of Local People.

Herbert Lee Waters (1902–97) spent most of his life running a photography studio in Lexington, North Carolina, but in 1936 the Depression encouraged him to branch out into movies. The son of textile workers, Waters generally filmed in mill towns within a 250-mile radius of his studio. Spindale, known as the “textile center of Rutherford County,” was smaller than the locales usually documented by Waters —the 1940 census gives a population of barely 4,000, nearly the same as today—but his working methods were the same.

Upon entering town, Waters usually negotiated with a local theater manager to show his film—often as a special attraction before the main Hollywood feature—and receive a cut of the box office. Two weeks after filming, Waters returned to screen the edited footage, drumming up attendance with newspaper ads that proclaimed “See Yourself in the Movies,” giving out buttons that read “I’m In the Movies,” and driving through town in his Oldsmobile to announce screenings over a loudspeaker.

Waters increased his earnings by shooting footage of local businesses and incorporating them in his films. He opens Spindale on a sign for “Alexander’s Café” before cutting to its front window and then interior shots of customers eating, the cook preparing food, and waitresses in action. Instead of a sales pitch, Waters simply shows as much of the establishment as possible, adding to the documentary value of the images today.

Waters was adept in turning his commercial sense to documentary ends. It was good business to film as many people as possible (since the more he filmed, the more would show up at the screening). In Spindale, as in the other towns he visited, he placed his camera in lively public spaces—such as the entrances of the local mill and school, and on the intersections of busy streets—to capture the maximum amount of subjects.

Children were an especially prized subject, since parents paid to see them onscreen. Hordes are featured in the municipal pool scene, with its shots of divers in a frenzied succession of near abstract repetition. Within this human stream, slight gestures allow briefly glimpsed individuals to spring to life, such as the plump girl who holds her nose before leaping off the diving board.

Many of the townsfolk filmed by Waters were appearing before a moving picture camera for the first time: some smile discreetly or laugh, some feign nonchalance, while others grimace, preen, or wink at the filmmaker. Their reactions are from an age before reality TV, phone cameras, and YouTube, when it was only through the power of itinerant filmmakers that everyday people could see themselves on the big screen.

About the Preservation
Waters, who at one time stored his films in a car shed, sold the original 16mm reversal print of Spindale to a private film collector. It was later acquired by Duke University, who used an NFPF grant to create a preservation negative and a new print.

More Information
Film historian Tom Whiteside profiled Waters in his documentary The Cameraman Has Visited Our Town (1989), which can be viewed online. Waters’s Kannapolis (1940–41) was placed on the National Film Registry in 2004 and is discussed by Daniel Eagan in America's Film Legacy: The Authoritative Guide to the Landmark Movies in the National Film Registry (New York: Continuum, 2009).

About the Archive
The extensive holdings of Duke University’s Rare Book, Manuscript, and Special Collections Library range from ancient Egyptian papyri to modern American print advertising. The library’s Archive of Documentary Arts holds the largest collection of H. Lee Waters’s work, with more than 100 reels of film, as well as shooting logs and marketing materials. Nearly 30 town portraits from Movies of Local People have been preserved at Duke with NFPF funding, along with eight from the North Carolina State Archives, East Tennessee State University, and Mooresville Public Library.