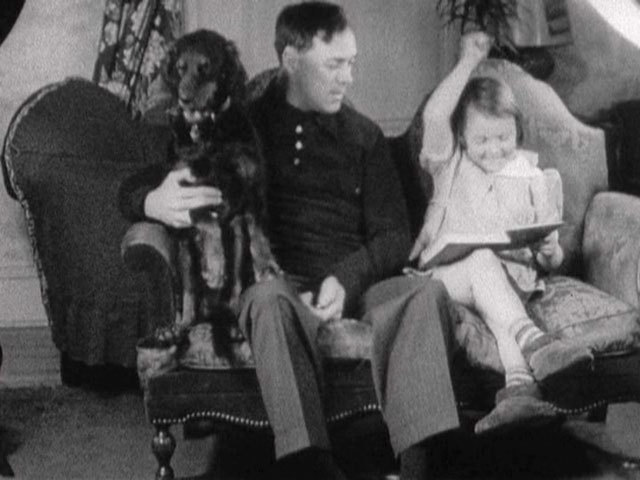 In 1934, five years after Hollywood converted widely to sound, RCA introduced a 16mm sound camera for amateurs. (Synchronized sound was recorded optically on the edge of the film.) If we think of “home movies” as silent, that is because most amateurs continued only to shoot silent footage for the next fifty years, until video replaced film in the home market.

Archie Stewart (1902–98), a pioneering adopter of new technology, provides us with fascinating glimpses into the sights—and sounds—of family life in the 1930s. Stewart was a New York car dealer who had been shooting 16mm film since 1926. He obtained a sound camera around Christmas 1935 to document family events, outings with friends, and characters in Maine, where he had a second home. He was an active member of the Amateur Cinema League and in 1937 published one of the first articles on amateur sound, “A Talkie Movie Maker Speaks,” in the league’s magazine, Movie Makers. That year the league had 250 chapters, and the New York Times estimated that the country had a hundred thousand home-movie makers. Stewart continued making films until 1993, long after most amateurs had switched to video, and his collection at Northeast Historic Film runs to almost seventy thousand feet of 16mm film.

The brief excerpts here begin with snow scenes from January 1936, which Stewart narrates from behind the camera. The charmingly staged interior sequences begin with his two daughters “surprising” him with a cake on his thirty-fourth birthday, followed by reading lessons given in 1936 and 1937, and the daughters’ mock tea party. Today this domestic world of seventy years ago seems simultaneously familiar and strange. The family subjects are identical to those of home videos, and yet every detail is distinctly of the 1930s. One motivation for such filmmaking has re­mained constant. “The love of parents for their children is the most important factor in the present rapidly accelerating popularity of home movies,” noted Parents Magazine in 1929. Sound-film hobbyists such as Archie Stewart captured the ephemeral intimacies of everyday life and language. —Scott Simmon

About the Preservation
Films by Archie Stewart and several other early amateur filmmakers were preserved in 1999 by Northeast Historic Film through Treasures of American Film Archives funding.