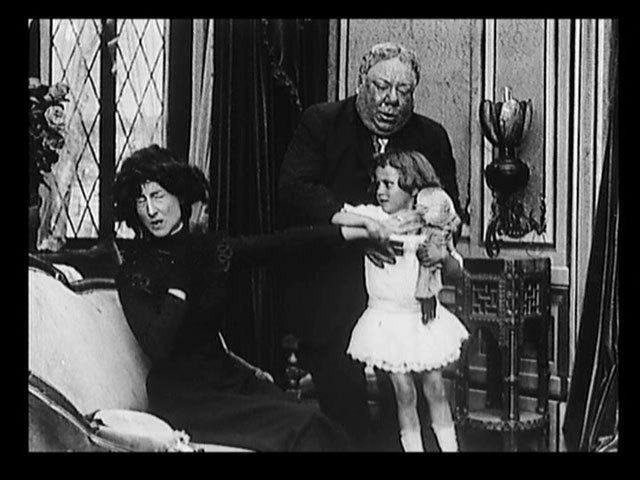 American film’s unlikely first comic star was John Bunny, rotund, bulbous nosed, and already forty-seven when he entered movies in 1910 after two decades on the stage. If he is little remembered today, it is because his career was cut short by his death in 1915 and because only a handful of his approximately 150 films survive. He was so internationally renowned by 1915 that the Dublin, Ireland, Evening Herald announced simply, JOHN BUNNY IS DEAD, THE BEST-KNOWN MAN IN THE WORLD.

Bunny was frequently paired with the gaunt, pinched Flora Finch to form film comedy’s first popular fat-and-lean team. “I weigh only a hundred pounds,” she reported, against Bunny’s three hundred. All of his films were made for the Vitagraph Company, which also pioneered multi-reel literary adaptations, including a three-reel Pickwick Papers from 1913 in which Bunny was perfectly cast as Mr. Pickwick.

Released in September 1911, Her Crowning Glory comes seven months into the series popularly called “Bunnyfinches.” The film’s title refers to the “chestnut curls” of Flora Finch’s character, who is, as Vitagraph’s publicity put it, “a governess who possesses a luxuriant head of hair and a face that is a shame to speak of.” Bunny is the indulgent widowed father of an undisciplined daughter, played by eight-year-old Helene Costello, daughter in real life of Vitagraph’s dramatic star Maurice Costello and herself best remembered for starring in the earliest “all-talking” feature, Lights of New York (1928).

Her Crowning Glory is a round-robin of household jealousies and surprisingly vicious schemes. (The nurse’s first ploy to help her ward—and herself—is easy to miss: She gives the spoiled daughter a pin to stab the governess in the leg.) What seems universal in early American film comedy is its anarchistic zeal in disrupting decorum, familiar to us from slapstick comedies produced a few years later at Mack Sennett’s Keystone studios. There’s a depth of cruelty in this domestic “situation comedy” that brought a defensive response in trade reviews: “The picture is a cutting satire. No doubt satires are, to a certain extent, healthy,” Moving Picture World informed its readers. The film ends with a hint that a more suitable candidate for the new wife and mother has been in the home all along. —Scott Simmon

About the Music
Crammed with comic detail, well plotted, and filled with merciless mockery of all of its characters, this is a very enjoyable film to play for. It calls for the musician to pull together pieces of three distinct types and then to play them all with gleeful disrespect. Certainly there must be children’s songs, and several can easily be heard, including “Old King Cole,” “Humpty-Dumpty,” and “Hickory-Dickory-Dock.” The most important one, however, is “Pop Goes de Weasel,” which during the nineteenth century migrated from minstrelsy to the realm of children’s music, acquiring new words as it did. (One of the earliest American sheet music versions appeared in 1859, with words in minstrel dialect that refer neither to a monkey nor to a mulberry bush.)

There must also be “love themes,” and the score has two, juxtaposed during the love scene between John Bunny and Flora Finch. First comes the cloying song “Cuddle Up a Little Closer, Lovey Mine” (Hauerbach [Harbach], Hoschna, 1908). Indeed, it almost seems as if the scene of these performers attempting to cuddle was filmed with this song in mind. After Bunny gets on his knees and proposes, saying, “It was your glorious hair that first made me love you,” I could not resist leaping to “Mon coeur s’ouvre à ta voix” (known in English as “My heart at thy sweet voice”), the famous soprano aria from Saint-Saëns’s opera Samson et Dalila (1877). True, in this film Delilah’s hair is cut off, rather than Samson’s, but that is part of the fun: The mistreat­ment of a grandiose song goes with the film’s satire of class pretensions. Moreover, the aria also belongs to the score’s third type of music: songs about hair. There is only one other, by Stephen Foster, and it appears at the beginning and twice later on. It is, of course, “Jeanie with the Light Brown Hair” (1854)—a glorious chestnut of a tune, even if the color does not match! —Martin Marks

About the Preservation
Her Crowning Glory was preserved by UCLA Film & Television Archive from an original nitrate negative.