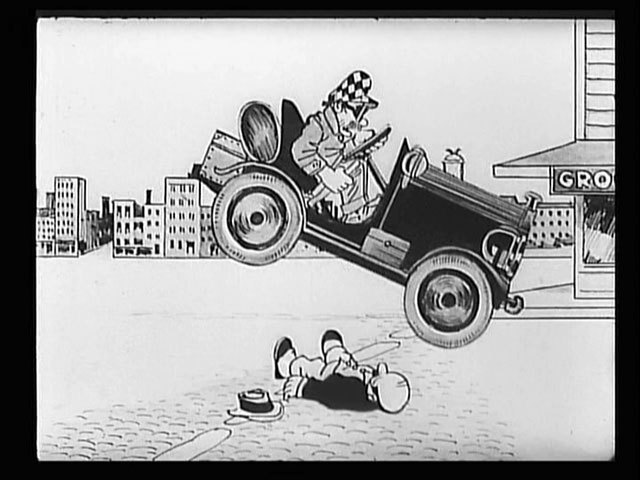 Except for a few experiments, hand-drawn animated cartoons weren’t regularly made in America until 1914. They were simply too labor intensive compared with live-action films. Within the next two years, however, production exploded thanks to transparent celluloid, tracing paper, printed backgrounds, and other time-saving innovations.

Harry Palmer, creator of I’m Insured, had embraced celluloid animation in 1915 for his socially satiric Keeping Up with the Joneses until a patent-infringement suit forced him to discontinue that series. He returned to the Flushing, New York, studios of Gaumont American with an even more pared down animation style for a new series called Kartoon Komics. I’m Insured, a “Komic Kartoon” from October 1916, is an effective example of the style that allowed animators rapidly to complete one-person projects. Palmer attempted to turn out a finished short every week, a goal he didn’t quite reach.

I’m Insured opens with a hand sketching its first scene. Harry Palmer’s few other surviving films likewise begin with an “out of the inkwell” line drawing, a device familiar from films by Win­sor McCay and elaborated later by Max and Dave Fleis­cher. Palmer called his creations “animated news cartoons,” and their stylistic origin in newspaper cartoons is reinforced by the balloon dialogue from this film’s hapless, unnamed hero.

Putting the best face on his lawsuit defeat, Palmer expressed plea­sure in switching to the Kartoon Komics, a series rare at the time for having no continuing protagonist: “We found that Keeping Up with the Joneses was entertaining, but we felt that there would be greater interest in it [the Kartoon Komics] for the artist, because there is the infinite variety which is not possible where week after week we are bound to the scenarios of the Jones family.” —Scott Simmon

About the Music
For this “kartoon” two pieces suffice, one of high character, one low. The first is the “Gavotte” from Ambroise Thomas’s form­erly popular opera Mignon (1866). During the silent period gavottes—moderately quick, courtly dance pieces—were mostly considered quaint relics, suitable for costume dramas and stories of “olden” days. But this one has enduringly youthful charm and nimble rhythms, so I used it to grace Harry Palmer’s elegant, fast-motion line drawing at the cartoon’s beginning. Once the story begins, I moved to “The Moving Picture Rag: Characteristic March Two Step” by one “Danmark” (otherwise unknown to me). This piece occupies the last page of the Remick Folio of Moving Picture Music (1914). It is thus about the same age as the cartoon and has the right tone for the latter’s many gags—whose effectiveness I also tried to “insure” with some im­provisatory touches. —Martin Marks

About the Preservation
Funding for UCLA Film & Television Archive’s preservation of this film was provided by Jere Guldin, the Silent Society of Hollywood Heritage, and the International Animated Film Society, ASIFA-Hollywood.