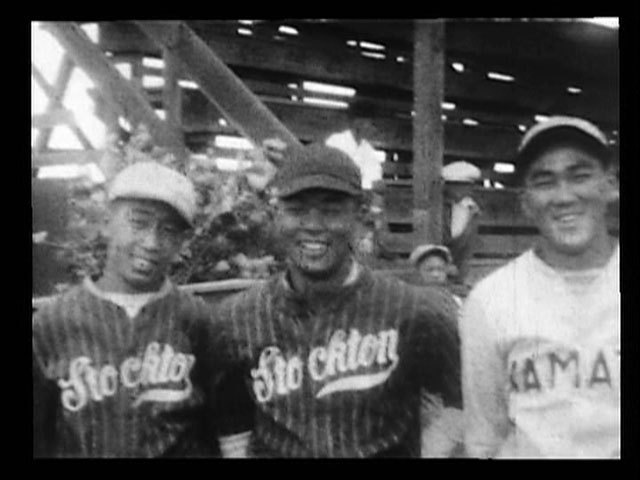 For a window into the daily life of ethnic Americans before World War II, no source surpasses amateur filmmaking. Like the rural towns seen elsewhere in this anthology, ethnic communities held little interest for mainstream filmmakers.

Rev. Sensho Sasaki (1903–72), a twenty-fifth-generation Buddhist priest, took these movies of his family and others in West Coast Japanese American communities. (He can be glimpsed briefly in these excerpts, lighting a cigarette.) Rev. Sasaki took up amateur moviemaking soon after 16mm safety film was introduced in 1923. The shots of giggling girls dancing a sidewalk Charleston and the baseball players were taken around 1927 in the California Central Valley city of Stockton. Later Rev. Sasaki moved to Washington state and the Tacoma Hongwanji Buddhist Church, around which most of the subsequent sequences were taken in 1932—as dated by his homemade intertitle—during the "NWYP's [probably North West Young People's] Third Annual Buddhist Federation Convention."

These are ordinary enough home movies. But history has a way of adding value to the simple artifacts of the past. In hindsight, it's impossible to look back at Rev. Sasaki's films of Japanese American life without seeing them as rare documents of communities soon to be uprooted by forced incarceration in the American domestic detention camps of World War II. —Scott Simmon

About the Music
No one can know what Rev. Sasaki would have wanted for musical accompaniment to his footage—nor if he even wanted any music at all. Of course, such uncertainty pertains equally to many of the other examples of amateur filmmaking in this anthology, but here it is compounded by the subject matter. Assuming (as I do) that this film ought to be enhanced by music, one must then decide upon its character, whether mainly "Japanese," mainly "American," or some mixture of the two. This score is basically American in style, taking its cue both from the West Coast settings and from the activities depicted. The children dancing the Charleston and the baseball game prompted me to play some familiar American songs and the "National Emblem March" by E.E. Bagley. Still, I sought Japanese inflections by incorporating pieces from the silent period that were intended for travelogues, "exotic" stories, and the like.

I also sought a rather wistful overall tone, for reasons indicated at the end of the commentary above. I was drawn to use an appropriately lyrical, melancholy segment from a piece called "Fuji-Ko (Japanese Intermezzo)" by H.R. Shelley. It can be heard more than once, notably for the film's final shots and poignant "Sayonara." The latter bespeaks a confidence that was sadly contradicted by future events. —Martin Marks