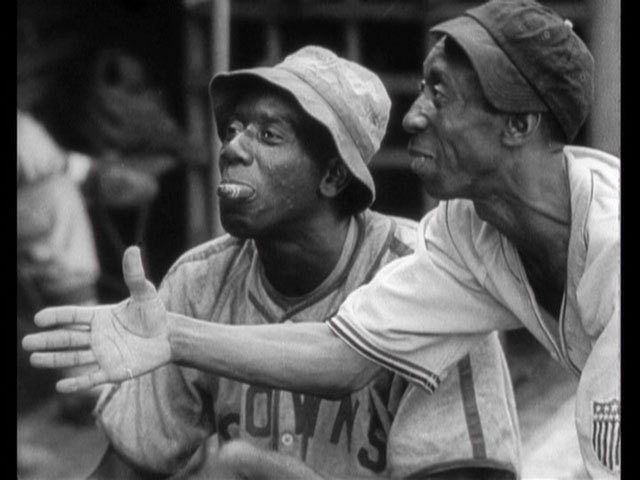 For half a century, African American baseball players had their own leagues, apart from the all-white Majors. These rare pieces of unedited silent footage of Negro American League players, shot in September 1946 at Cincinnati’s Crosley Field, focus on the amazing Reece “Goose” Tatum (1921–67) of the Indianapolis Clowns. Tatum and his teammates warm up with comic routines, followed by a game against the Kansas City Monarchs.

Although in the late nineteenth century a handful of African Americans played on integrated teams or on black teams that com­peted in integrated leagues, by the twentieth century segregation was almost absolute. From the 1920s through the 1940s, various Negro Leagues flourished, embracing more than fifty teams. The Indianapolis Clowns joined the Negro American League in 1943. While most league teams played straight baseball, the Clowns also entertained with dexterous comedy along the lines of the Harlem Globetrotters’ basketball skills. Some Negro Leagues players expressed resentment at the Indian­apolis team for perpetuating the image of a “clownish” race. But, like the Globetrotters, the Clowns were athletes as much as popular entertainers; they twice won the league’s Eastern Division title and in 1952 featured future home-run king Henry Aaron at shortstop.

The origin of this footage is unknown, but it was evidently taken to showcase the skills of “Goose” Tatum—in uniform No. 15 and seen in the first shot smoking a cigar. Tatum, even more astonishing on the basketball court, had signed with the Globetrotters in 1942. After re­turning from World War II service with the Army Air Corps, he had also joined the Clowns as first baseman, playing baseball in summers and basketball in winters. Considered one of the all-time great Globe­trotters, Tatum developed many of the team’s classic routines. In baseball, his height (six feet six) and amazingly long arms allowed him to stretch effortlessly for balls at first base. Among the famous routines Tatum performs here is “shadowball,” in which players only pretend to throw and field the ball, but with movements so convincing that they fool spectators.

Also glimpsed are other Indi­an­apolis players, including Richard “King Tut” King (with the team from 1934 to 1959 and seen doing ball-handling tricks in a tailcoat) and Sam Hairston (the catcher, later of the Chicago White Sox). Seen even more fleetingly on the opposing Kansas City Monarchs, consistently one of the league’s best teams, are the great pitcher Hilton Smith (coaching at first base) and All-Star third baseman Herb Souell (on whom Tatum plays the hidden-ball trick).

Most of Reece Tatum’s career took place just before professional baseball was desegregated. In 1947, Jackie Robinson, former shortstop for the Kansas City Monarchs, was brought up from the minors to the Major Leagues’ Brooklyn Dodgers. Integration rapidly drew African American fans from the Negro Leagues, which disbanded in 1948, although individual teams continued through the 1950s. After the 1949 season, Tatum took up basketball exclusively. —Scott Simmon

About the Music
During the 1920s, if not before, musicians who played in movie houses within African American communities adopted a broad range of approaches to picture playing, freely mixing the usual traditions with varied styles of jazz improvisation. (Count Basie is one musician whose reminiscences of this kind of playing have been published.) Hence, for this film a call went out to “the Jazztet”—a Boston­-based “team” of six fine players led by Mark Harvey (trumpet) and featuring Arni Cheatham (saxophone), Bill Lowe (trombone and tuba), Larry Carsman (guitar), Jesse Williams (bass), and John Connelly (drums). After watching the film in silence, they talked over what course their improvisations would follow. They then began recording “takes” to the film, and the whole score was completed in about an hour.

The result is both spontaneous and well matched to the consummate artistry of Tatum and his teammates. The music divides into four segments, according to the rhythms and routines on-screen. The first piece is a good-natured send-up of “Take Me Out to the Ballgame” (Norworth, A. von Tilzer, 1908)—still the sport’s best-known song. After that the group goes into freer improvisations based on familiar styles, from blues to bebop. —Martin Marks

About the Preservation
Little footage exists of the Negro Leagues, whose games were not generally covered by mainstream newsreels. The dates, teams, and players in this footage were identified in 2000 by Lynne Kirste of the Academy Film Archive and John “Buck” O’Neill, of the 1946 Monarchs team and former Chairman of the Board of the Negro Leagues Baseball Museum in Kansas City, Missouri. The original 35mm nitrate footage may have been shot for a newsreel for African American audiences such as the All-American News.