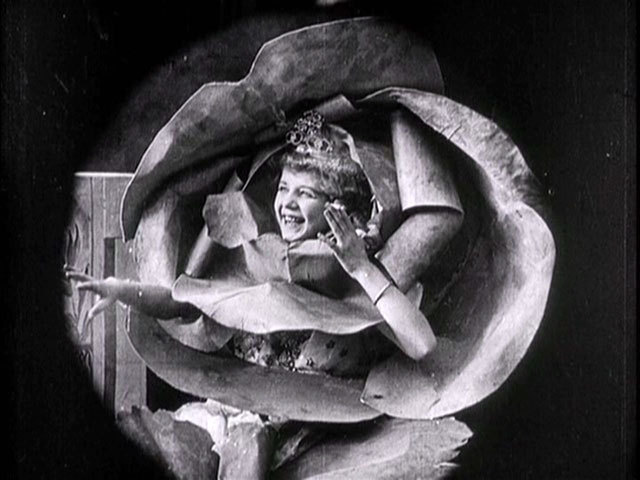 This tale of a tormented smoker was the most celebrated special effects film of its day, the subject of a 1909 article in Scientific American and a chapter in a 1912 book entitled Motion Pictures: How They Are Made and Worked. "The effect of The Princess Nicotine when thrown upon the screen is so startling that it defies explanation by the uninitiated," reported Scientific American; "The little fairy moves so realistically that she cannot be explained away by assuming that she is a doll, and yet it is impossible to understand how she can be a living being, because of her small stature."

Trick films were a specialty of the New York-based Vitagraph Company, then America's leading film producer. Vitagraph had been founded back in 1897 by magician Albert E. Smith and J. Stuart Blackton, a newspaper illustrator and "lightning sketch" vaudeville cartoonist. Their interests intersected in trick films, inspired by Georges Méliès's pioneering French fantasies. Princess Nicotine; or, The Smoke Fairy, produced and probably directed by Blackton, found its immediate source in another French film, Emile Cohl's The Animated Matches (1908). Blackton's film used double exposure (for the fairy in the bottle), stop-motion animation (for the rose that transforms into a cigar), as well as more mundane tricks: hidden wires, giant props, and a man under the table blowing smoke. The shots of the tabletop fairies were accomplished through ingenious on-set optics rather than in-camera double exposures: The actresses performed on a platform next to the camera, and their image was reflected in a mirror placed far behind the table. (The trick also relied on a lens capable of extreme depth of field, so that both the smoker and fairies are in focus.) Because the camera height was aligned with the tabletop, the fairies appear to be dancing on it.

The film opens as the smoker falls asleep, justifying a dream logic that is not without its salacious side—especially when the young fairy throws up her skirts—and the imagery throughout is ripe for psychoanalysis. Although Princess Nicotine may also have been intended as an advertisement for Sweet Caporal's cigarette and cigar brands, the smoker's habit has its revenge, and the dream turns to nightmare. —Scott Simmon

About the Music
A fitting way to start seemed to be with "Love Is like a Cigarette" (1908), a charming popular song with music by Victor Herbert that appeared the year before the film. However, rather than simply repeat this song (as was apparently often done for such shorts), I try to match the film's succession of "tricks" with a succession of ballet and opera tunes by Tchaikovsky, J. Strauss, Verdi, Délibes, and Offenbach. Such parodic musical narratives are perhaps a bit more modern than were the accompaniments of the day, but the film's magical wit and at times racy humor seem to warrant such an approach. —Martin Marks