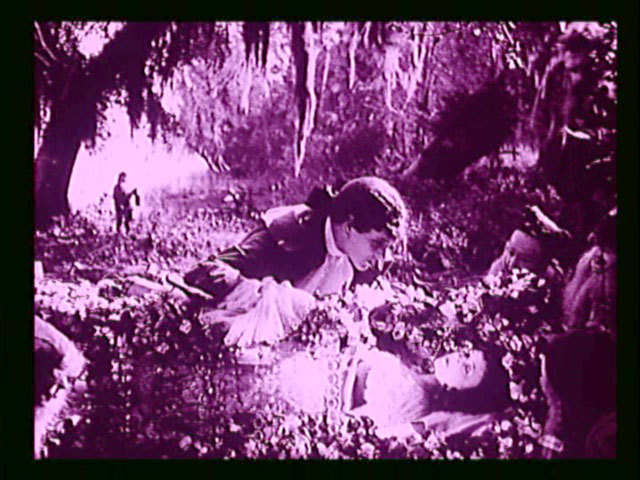 For the eighty years before its George Eastman Museum restoration, this 1916, six-reel Snow White was known primarily from Walt Disney’s recollection of seeing it at a Kansas City matinee for newsboys. Snow White stuck in his mind, he said, partly because of an unusual exhibition format in which the film was rear-projected onto four screens arranged in a square around which the audience sat. From his seat the fifteen-year-old Disney could see the film twice. His memory was inspiration for Snow White and the Seven Dwarfs (1937), the first animated feature.

Snow White was a vehicle for the now forgotten star Marguerite Clark. By her retirement from films in 1921, she surpassed even Mary Pickford in popularity as an adult actress playing characters half her age. Like other stage stars, Clark had been tempted into films only when they reached feature length, signing in 1914 with Adolph Zukor’s Famous Players Film Company. With the motto “Famous Players in Famous Plays,” Zukor had pioneered the adaptation of full-length stageplays to the screen.

Trade papers were surprised that two more years elapsed before Famous Players (becoming known as Paramount Pictures) put the thirty-three-year-old Clark in Snow White. This would be her seventeenth feature. “That they have not before delved into the unlocked treasures of her past stage successes is remarkable,” commented Motion Picture News. The Broadway Snow White and the Seven Dwarfs had opened in November 1912 and starred Clark for two seasons. The stageplay was by theatrical impresario Winthrop Ames, director of so many of the era’s artistically ambitious plays, who saw in the Brothers Grimm tale the possibility of the first major play especially for children.

The film version, also written by Ames, is true to its theatrical origins, with deep proscenium interior staging. (The moss-covered forest exteriors were shot in Georgia.) Director J. Searle Dawley, a collaborator with Edwin S. Porter back to 1907, employs a static camera that moves only to introduce Marguerite Clark as she emerges from a barrel in the royal kitchen.

Departing from the Grimm tale, Ames borrowed heavily from another European folktale with an envious stepmother, “Cinderella.” In this resulting version the young princess Snow White has been relegated to a kitchen servant but also has an opportunity to dance with the handsome prince well before her “death.” The wicked stepmother queen, the truth-telling mirror, and the seven dwarfs are all drawn directly from Grimm, as are details usually missing from adaptations, such as the poisoned comb. Dorothy Cumming, who plays the stepmother, is best remembered as the terrifying mother who greets Lillian Gish with a bloody butcher knife in Victor Seastrom’s The Wind (1928). Creighton Hale, the prince, would play small character parts through the 1950s. The film’s prologue—in which Santa Claus brings dolls that transmute into miniature cast members—was devised for the film’s Christmas Day 1916 release. It suggests too the influence on the film of nineteenth-century English stage pantomime, typically presented over the Christmas season and based on fairy tales.

For the jaded Variety, this fairy tale’s appeal to children was the most that could be admitted: “How anyone could expect those possessing adult minds to sit through this feature is a mystery.” Elsewhere the film drew raves, with Photoplay mocking Variety’s reviewer: “Poor chap! As far as he is concerned the world of imagination is shut behind an unclimbable fence.”

The Brothers Grimm tale inspired other silent films, including a 1902 short and a 1917 three-reeler. Among the more extreme mutations in the sound era are Max and Dave Fleischer’s 1932 cartoon with Betty Boop as Snow White, Bob Clampett’s infamous Coal Black and de Sebben Dwarfs (1942), and Snow White and the Three Stooges (1961). This 1916 version certainly softens the folktale’s savage edges, but no film has been willing to follow the Grimms’ method for killing off the wicked queen at Snow White’s wedding celebration: “Then they put a pair of iron shoes into the fire until they glowed, and she had to put them on and dance in them. Her feet were terribly burned, and she could not stop until she had danced herself to death.” —Scott Simmon

About the Music
In its surviving state, Snow White is more fragmented than films we are now used to seeing and, while beautifully presented, shallower than other films of fairy tales we have come to treasure. As suggested above, it is much less “Grimm” than the tale from which it descends. For these very reasons, a score can do wonders for the film, smoothing it out, tying incidents together, and adding emotional depth. Ultimately it became one of my favorite challenges in this anthology, and I have sought to grace Snow White with the most apt and engaging repertoire I could find.

Observing the theatrical settings, costumes, and staging, I thought of ballet scores and other theater music. Avoiding Tchaikovsky’s overly familiar works, I delved into mostly French repertoire. For example, I found the melancholy “Passepied” by Délibes (written as part of his score for Victor Hugo’s Le Roi s’amuse in 1884) to be an affecting support to the early scenes.

This type of music stands in the wings, however, compared with the many romantic piano pieces the score contains. They range in mood from the piquant and sentimental to the mysterious and melancholy. Marguerite Clark’s vivacious yet small-scale portrayal of Snow White, for example, brought to mind Ede Poldini’s “La Poupée valsante” (The waltzing doll, circa 1900), a sparkling morsel, once very popular. The main sources for this kind of music were Mendelssohn’s collections of Songs Without Words and Grieg’s Lyric Pieces. The latter’s Nordic style is particularly suited to elements of the film: His “Halling,” “March of the Trolls,” and “Wedding Day at Trollhagen” all accompany scenes of the dwarfs, and his wonderful “In Ballad Style” serves perfectly as a dirge for Snow White’s “death.”

Of necessity, not all of the repertoire sits so high. In filling out the lengthy score, I had recourse to salon pieces by many lesser piano composers (including Theodore Lack’s “Cabaletta” and G.W. Warren’s “Song of the Robin”) and pieces published for movie pianists in the teens and twenties. Two of my favorites in the latter group are G.H. Clutsam’s sinister “Prologue,” heard during scenes with Witch Hex, and Henry Sawyer’s good-humored “Ghost March,” heard when the dwarfs count off after they first come home and later when they put Snow White to bed. I hope this musical panoply helps viewers to enjoy the film’s dreamlike, imaginative realms, as well as its peculiar digressions and unpredictable leaps. —Martin Marks

About the Preservation
Many American silent films lost in the United States have been salvaged by foreign archives from prints
distributed internationally, although their ultimate survival remains precarious. Long thought lost, a single tinted nitrate print of Snow White with Dutch intertitles was saved by the EYE Film­museum. A few of the original sequences do not survive—or may have been cut for European release—including the infant Snow White’s delivery by stork, a special effect praised in reviews. The George Eastman Museum re-created the lost original intertitles by translating the Dutch back into English, drawing phrasing from Winthrop Ames’s playscript, and duplicating the fonts used by Famous Players in this period. The complex 1998 restoration was made possible by funding from the National Endowment for the Arts, the Eastman House Council, and Isabella Rossellini.