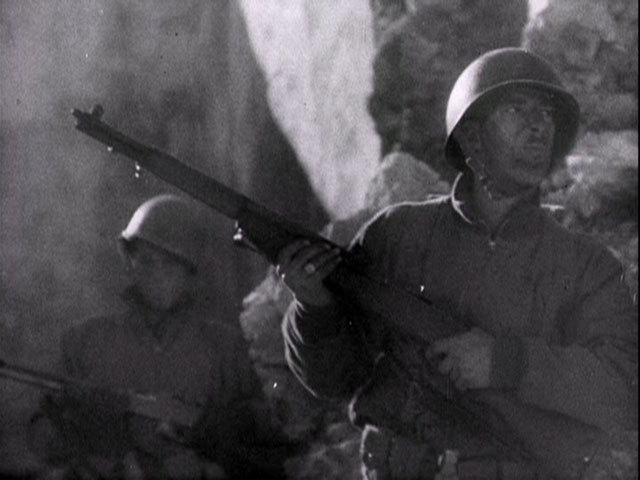 The Battle of San Pietro (originally titled simply San Pietro) builds into the greatest of combat documentaries, unmatched in evoking the physicality and human price of war. It’s at once factual and inspirational, harrowing and tender. It’s filled with eloquent words and with images that defy words.

When America entered World War II, prominent Hollywood directors enlisted to make government-sponsored documentaries, notably John Ford, Frank Capra, William Wyler, George Stevens, and John Huston. The youngest among them, Huston had been a screenwriter before turning to directing with The Maltese Falcon (1941). San Pietro is the second of his three war documentaries, filmed when Huston was a captain in the army and released after his promotion to major. It followed his relatively straightforward Report from the Aleutians (1943) and preceded Let There Be Light (completed in 1946 but suppressed until 1980), his moving documentary about the psychological wounds of war.

The main battle around San Pietro, an ancient town of no particular note in the mountains of central Italy, pitted German forces against the Allies, primarily American infantry, from December 8 to 16, 1943. The Allies had invaded Sicily in July; Mussolini had been thrown from power by the Italians, who sued for a separate peace (many soldiers joining the Allies, as glimpsed in the film). Germany had easily taken over the country and was well entrenched militarily by the time of the bloody U.S. landing on the Italian mainland at Salerno in September.

Huston’s initial assignment was to document the liberation of Rome. When the fight northward proved slower and more frustrating than the army anticipated, he was reassigned to make a film that would explain the difficulties to stateside Americans. No film more precisely computes the price of each hard-won yard in lives lost, equipment destroyed, farmland decimated, and towns ruined. (To follow the military maneuvers, it helps to recall that divisions split into regiments, which split into battalions, which split into companies. Huston also uses the term “D day” to mean any day on which a military operation will be launched.)

San Pietro combines astonishing actuality footage with one of the most memorable voice-over narrations in film—in both script and delivery. James Agee characterized it best in his 1945 Nation review: “Huston’s narration is a slightly simplified technical prose, at once exact and beautifully toned and subtly parodistic; it is spoken with finely shaded irony, equally free of pompousness and optimism and mawkish generalizations and cheap bitterness.... For once wordiness in a film more than earns its way.” When the army reaches the village of San Pietro itself, even these words fall silent before images of bodies unearthed from rubble and children’s resilient faces.

Some recent critics have expressed shock on discovering that San Pietro is carefully crafted and not the compilation of artless footage that some associate with truth in documentary. The battle sequences have a handheld, cinema verité look, but careful viewers will notice, for instance, the oddly large number of apparently left-handed soldiers. Evidently Huston flipped some shots to make the soldiers’ screen movements correspond to the east-to-west attack on the maps: “We” always attack from right to left, “the enemy” from left to right. Huston also restaged more footage than his end title admits. But accurate facts about this particular battle are marshaled into an authentic argument about valor in combat.

Huston screened his first edit for army superiors in October 1944. “I knew they were in for something of a surprise,” he said, “but I wasn’t prepared for the shock with which they received it.” Several officers walked out, and a decision was made to shelve the film, until army chief-of-staff Gen. George C. Marshall ordered its release—with some cuts, and a further delay. (The film wasn’t seen widely until May 1945, after victory in Europe.) In retrospect Huston agreed with the changes: “I had gone overboard. I had made interviews with young soldiers.... They talked about the meaning the war had for them, what they felt, the role they had played, and quite a few of the ans­wers were very touch­ing, very profound. I had made twenty-five or thirty of these interviews. Then, among the young soldiers, several were killed. I put the text they had said when they were still alive over the images of the cadavers. It was too heartrending, too unbearable. And think of the families seeing that!”

The emotional philosophy behind this missing sequence survives in Huston’s narration. After shots of soldiers’ dog tags nailed to rough wooden grave markers, we see survivors smiling wearily, but the voice-over undercuts the relaxed moment: “Many among those you see alive here have since joined the ranks of their brothers-in-arms who fell at San Pietro.... Ahead lay... more San Pietros, greater or lesser, a thousand more.” What is most uncompromising about San Pietro among combat documentaries is its refusal to claim that the battle we’ve experienced in such detail was in any way distinctive or decisive, and thus its refusal to bestow special military significance on the soldiers’ sacrifice. Tacked on to dispute this view is the two-minute introduction by Gen. Mark Clark, commander of the Italian campaign. Looking ill-at-ease, Clark claims San Pietro was “key” to the region and that the “cost” in deaths “was not excessive.”

The complaint voiced against the film by the army brass was most simply that “this picture is pacifistic. It’s against war, against the war.” Huston responded that he made the film in profound admiration for the courage of the foot soldier, but he also said, “Well, sir, whenever I make a picture that’s for war—why, I hope you take me out and shoot me.” —Scott Simmon

Further Viewing
Let There Be Light (1946), the third of John Huston’s war documentaries, was restored by the National Archives with support from the NFPF and made its premiere on the NFPF website during Memorial Day weekend of 2012.