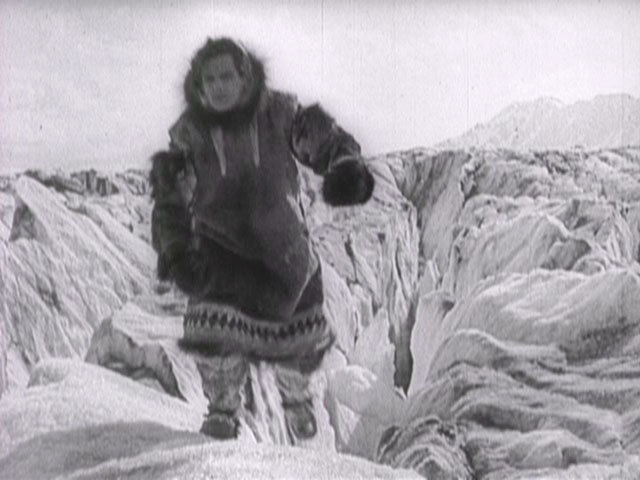 By the start of the 1920s, filmmaking and distribution were largely controlled by a handful of Hollywood studios. Ever since then, it has taken "independent" films to break the production routine. The Chechahcos is about as independent as features come.

This first feature filmed entirely on location in Alaska was the brainchild of Austin E. Lathrop. In voyages like the one imagined in the film's opening, "Cap" Lathrop had skippered gold seekers northward during the Klondike rush of the late 1890s. His empire eventually included a string of movie theaters, radio stations, newspapers, a cannery, and Alaska's largest coal mine (in which he was killed in a 1950 accident). Lathrop and his Alaska Moving Picture Corporation produced just this single film, which was not a commercial success. The Chechahcos (pronounced chee-chaw-koz) transliterates an Inuit word for "tenderfoot" or "newcomer" to the north, and is a title that would have been instantly vetoed by Hollywood marketers. As Variety commented about the title, "Its value commercially is still open to discussion in view of its difficult pronunciation."

At its release in May 1924, the film was preceded by a (now presumably lost) short showing President Harding, who died the previous August, meeting the crew during his last cross-continent trip. None of the cast or crew had much moviemaking experience. Director-writer Lewis Moomaw worked for a tiny Portland, Oregon, production company called American Lifeograph; he had shot exteriors on one of his two previous features, The Golden Trail (1920), in Alaska. With the exception of Eva Gordon (who plays Margaret Stanlaw), the leads were apparently drawn from actors residing in Alaska. Albert Van Antwerp (who plays the younger of the two seasoned prospectors) and Alexis B. Luce (the knife-tossing villain) appeared only in this one silent film, although Luce had long stage experience. William Dills ("Horseshoe" Riley, the bearded sourdough) had debuted in The Golden Trail and would end his career with another (lost) Alaskan feature, North of Nome (1925).

Gladys Johnson too returned to the screen only for North of Nome, despite the build-up given her by Variety at The Chechahcos' New York opening: "Gladys Johnson, personating Ruth Stanlaw grown up, suggested brilliant possibilities as a screen personality. Her girlish charm typifies the adolescent period outwardly better than Marguerite Clark ever did, or anybody today." (Marguerite Clark—the star of Snow White in Program Four—had retired from films in 1921.) Variety also thought that all the "snow and ice stuff" would be just the ticket for the coming New York summer. The film's release also corresponds with the start of Charlie Chaplin's production on his epic Alaskan comedy The Gold Rush (1925), which may have been influenced by the striking staging here, especially of the line of prospectors trudging over Chilcoot Pass.

The Chechahcos begins with snowswept landscape ("A White Dominion—lonely—unfathomable," reads the first intertitle), and the land remains the film's central force. The evocative art titles are primarily by the luminist painter Sydney Laurence (1865-1940), born in New York and trained in Paris, who came to Alaska in 1903. (Art titles are intertitles with painted backgrounds that became popular in the 1920s; Hell's Hinges [1916], in Program One, includes some of the very first examples.) Laurence won renown for his landscapes—especially of Alaska's Mount McKinley, a version of which hangs in the White House in Washington—but was weaker with human subjects. Something of the same could be said about The Chechahcos as a whole. Its use of the land is breathtaking, while its tale of a lost child, a mother's love, and an oily villain is "like a Bowery melodrama" (in the New York Times' words) "and includes all the old hoke" (in Variety's). Still, there is something elemental about the story that suits the land. What also remains so extraordinary about The Chechahcos is how polished it looks for a production completely removed from Hollywood. Its authentic locations and action set-pieces—the ship explosion, the dogsled chases, the pursuit across the glacier—were bettered nowhere. Completely forgotten outside of Alaska, The Chechahcos is one of the most impressive examples of regional American filmmaking. —Scott Simmon

About the Music
For The Chechahcos I set out to create an exciting compilation score, much as I did for Hell's Hinges, its Western kin. But this "Northern" does not call for cowboy songs; what it wants is music tied to the period of the Alaskan gold rush (the story takes place from around 1897 to 1910) and its pioneer settlements no less than to the film's many rugged, wintry locations. The period and the settlements can be suggested through a rich heritage of music, much of which is now available in a splendid anthology, Music of the Alaska-Klondike Gold Rush: Songs and History, compiled and annotated by Jean A. Murray (1999, Univ. of Alaska Press). This source proved most helpful for ideas about appropriate songs, dances, and other pieces, especially for the early scenes onboard ship and for those in the Mason "Dance Hall," where Margaret Stanlaw sings and others drink, dance, and dally. It was gratifying to be able to play the beautiful nostalgic favorite "Home! Sweet Home!" (Payne, Bishop, n.d.), which she sings on ship: The complete song plays perfectly to the filmed performance and quoted words on-screen. Two famous waltz songs seemed especially appropriate for a woman in her position: "After the Ball" (Harris, 1892) and "She Is More to Be Pitied Than Censured" (Gray, 1898). (At least half of the ballads of the "gay" nineties seem to be about pitiable and "fallen" women!) For the film's sublime vistas, what I found to be the "right" music came from much farther afield, in Erik Satie's four Ogives for piano (1886). These astonishing miniatures—at once simple, majestic, spiritual, and impassive—were inspired by Satie's fascination with medieval mysticism and Gregorian chant. The French title refers to the pointed arches and ribbed vaults of Gothic cathedrals, to which (as I see it) the Alaskan mountains and glaciers have a strange affinity.

The score's overall structure is complex, and the repertoire is wide-ranging (with many comic pieces, agitatos, furiosos, etc.), because The Chechahcos is the longest feature in this anthology and has more varied pacing and scenes than the others. The action moves quickly at the beginning, slows considerably during the middle reels, and then races on dogsleds, mountain snowbanks, and glaciers to its climax. The most interesting characters are "Horseshoe" Riley, who conveys a gruff, "snow-wise" comic exterior but also a darker side in his intense dislike of adult women, and Ruth Stanlaw, the character who "grows" (physically as well as emotionally). It is her reunion with her mother, rather than with Bob Dexter, that brings the film to its emotional climax and end. These are some shining facets of the film that I have tried to "mine" and mirror with music. —Martin Marks