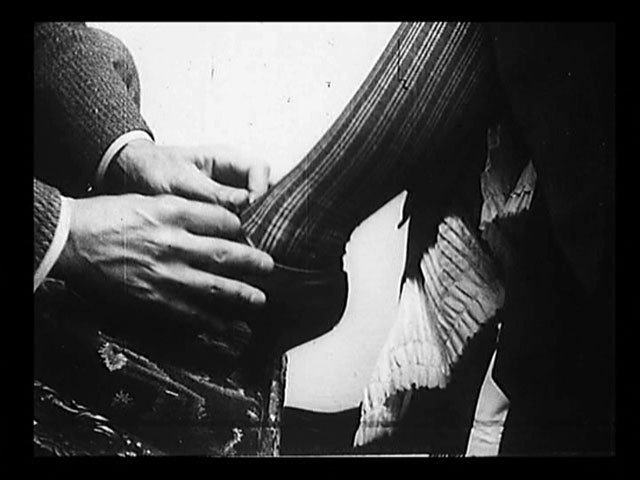 Although no one person “invented” the movies, Thomas Edison—along with his key employee W.K.L. Dickson—can claim credit for refining experimental ideas into patents that controlled the first decade of moviemaking in America.

Before the turn of the century, most movies consisted of a single unedited shot. In addition to its social fascinations, the three-shot Gay Shoe Clerk, filmed by Edwin S. Porter at Edison’s New York City studio on July 23, 1903, reveals a step toward coherent editing. The film’s two cuts are each a rough “match on action.” (In the insert close-up, the young woman raises her dress so that it reveals her leg in a way that roughly matches what we see in the two surrounding longer views.) Female ankles were an obsession of early film. The male moviegoer watching The Gay Shoe Clerk gets the pleasure of a forbidden close view, while punishment is meted out to someone else—a cinematic pattern with a long life. The shoe clerk (Edward Boulden, a member of Edison’s early stock company) is beaten for a transgression—an ending frequent in turn-of-the-century narrative films. Of course, at that time “gay” referred only to his devil-may-care impetuousness. The modern meaning gives unintended irony to The Gay Shoe Clerk, whose “young woman” was played by one of Edison’s male employees. —Scott Simmon

About the Music
Two pieces have been laced together: at the start, to set a gay mood, a lively strain from Scott Joplin’s “Eugenia” (1905); next, for the close-up flirtation, kiss, and comically violent aftermath, the very “fresh” song “Hello! Ma Baby” (Howard & Emerson, 1899). —Martin Marks

About the Preservation
The Gay Shoe Clerk was preserved from an original negative, part of the large collection of 450 early Edison titles donated to MoMA in 1940.

Further Viewing and Reading
The essential four-disc DVD collection of 140 Edison company films preserved by the Museum of Modern Art and the Library of Congress is Edison: The Invention of the Movies (Kino, 2005). For a history of Edison’s and Porter’s early filmmaking, see Charles Musser, Before the Nickelodeon: Edwin S. Porter and the Edison Manufacturing Company (University of California Press, 1991). For analysis of the representation of women in early films such as The Gay Shoe Clerk, see Judith Mayne, The Woman at the Keyhole (Indiana University Press, 1990).