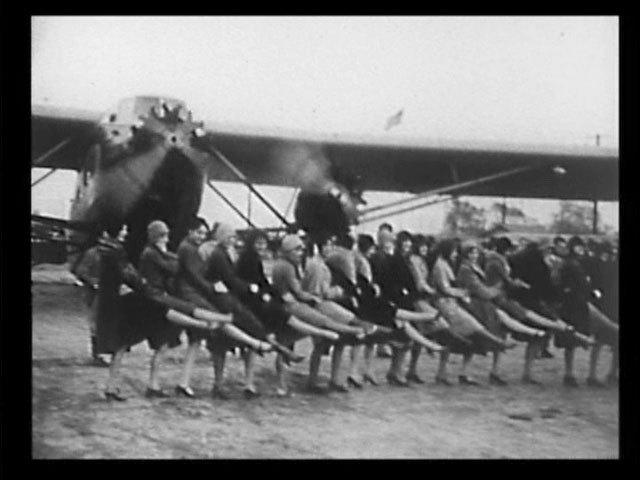 The Keystone Aircraft Corporation made this film in 1928 to promote its new Patrician, a huge plane for the day, with an eighty-eight-foot wingspan, a fifteen-thousand-pound take-off weight, and seats for twenty passengers. Although passenger air service in Europe began in the early 1920s, few regularly scheduled flights were made in the United States. Charles Lindbergh had ignited imaginations with his solo transatlantic flight in 1927. The challenge for commercial manufacturers was to convince the public that flying was safe, con­venient, and sexy.

The Keystone film begins with twenty men boarding the Patrician (which held fifteen in the main cabin and five in a forward cabin with “sleeping berths”) and disembarking as “pleased passengers.” The second sequence excerpted here—which may be from a second film by the company—shifts to Los Angeles, where things were evidently put into the hands of a cannier promoter ready to spice things up with the thirty-three “California beauties” whose legs compete for attention with the trimotor propellers. The light collective weight of the “beauties” presumably helps break the passenger-capacity and altitude-speed records proclaimed in the intertitles (at a time when aviation records—and prizes for breaking them—were widely announced). Alas, for all its technical superiority, Keystone had the bad timing to introduce its Patrician just before the Depression. Smaller, less expensive planes from Boeing, Douglas, and others would instead prove key to commercial aviation in America. —Scott Simmon

About the Music
At least since the success of the circus ballad “[The Man on] The Flying Trapeze” (1868), musicians and audiences have associated elegant tunes in waltz time with the sensation of being airborne. Once airplanes were invented, many such songs were composed, including “Come, Take a Trip in My Air-Ship” (Evans, Shield, 1904). I used the latter “air” to set a suitably lighthearted mood, but for the actual flight scenes the quick pacing led me to choose a glittering lively march called “Attack of the Uhlans,” by Carl Bohm. For those scenes of the “chorus-line” of “beauties,” I decided to follow a traditional newsreel approach by playing some enduring songs of the period. —Martin Marks

About the Preservation
Both films were preserved in 1999 through Treasures of American Film Archives funding.