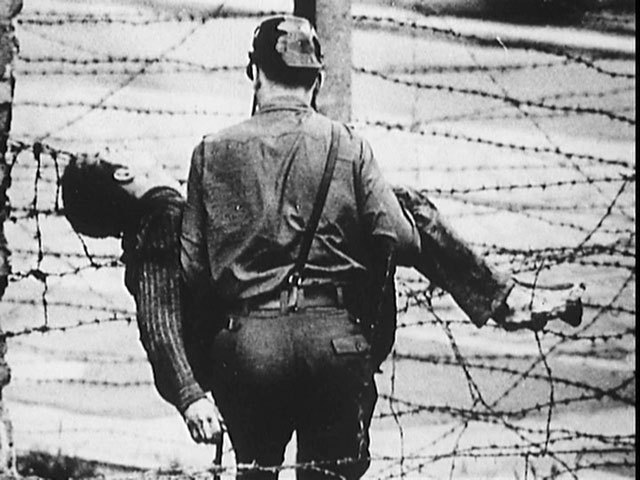 This taut 1962 documentary about the first year of the Berlin Wall is as little known to Americans as are almost all of the films produced by the United States Information Agency. The USIA, created at the start of the Eisenhower administration in 1953, was charged with disseminating ideas about America and the "Free World" to audiences abroad. In addition to its "Voice of America" radio network and foreign-language magazines, the USIA produced films that by law could not be screened publicly within the United States. This restriction, intended to prevent the federal government from propagandizing its own citizens, also meant that Americans could not view the films at all, even for study at the National Archives. With the end of the Cold War, the law was changed in 1990 to allow domestic release of USIA films twelve years after their distribution overseas.

If the Cold War was partly a battle of ideas, no symbol was more potent than the Berlin Wall. It was as if Churchill's 1946 metaphor of an "iron curtain" dividing Europe finally took physical form in 1961. In those intervening fifteen years, thousands of Germans had daily crossed the border between East and West Berlin—a divided city located well within Communist East Germany—and at least two-and-a-half-million East Germans had fled permanently to the West. From the East German and Soviet perspective, the drain of skilled workers threatened the state. On the night of August 12-13, 1961, the East German army erected a barbed-wire barrier, soon fortified by concrete, watchtowers, and mines. The wall eventually ran twenty-eight miles across Berlin and a further seventy-five miles encircling West Berlin, thus preventing East Germans from using West Berlin as a portal for escape—except to those with the daring captured in this film.

Like the best USIA films, The Wall distills political events into an emotionally clear and compelling ideological story. In 1962 Walter de Hoog gathered footage from U.S. and German newsreel sources and crafted this short film at the production facilities of Hearst Metrotone News, where he had worked since 1950. His straightforward, keenly balanced narration portrays Berliners as "accepting the wall but never resigned to it," as he put it recently. The extraordinary footage of the first escapes was propaganda enough. His challenge was to make the politics human.

The Wall was produced during the Kennedy administration, when the USIA was directed by legendary broadcaster Edward R. Murrow and its Motion Picture Service headed by twenty-eight-year-old George Stevens, Jr. The early 1960s are the great era for USIA films, which then displayed a wider range of political philosophies than after Vietnam became central to American foreign policy later that decade. Among Walter de Hoog's other government-sponsored films are In the Niger (1968, about the Peace Corps), The Infinite Journey (1970, about the first Apollo moon landing), If One Today, Two Tomorrow (1976, about overpopulation), and The Five Cities of June (1963, co-directed with Bruce Herschensohn), which President John F. Kennedy praised in a letter to Murrow as "the best documentary I ever saw." Kennedy was no doubt influenced by the film's help in turning his June 1963 "Ich bin ein Berliner" speech into a key ideological event in the history of walled Berlin. The Wall remained a favorite documentary of the president's brother, Attorney General Robert Kennedy, who went so far as to show it surreptitiously to visiting Soviet artists—who didn't always take well to the favor.

"We refuse to think that it will always be this way," narrator Alexander Scourby speaks for Berliners in the film. Twenty-seven years later, on November 9, 1989, the wall became history. —Scott Simmon