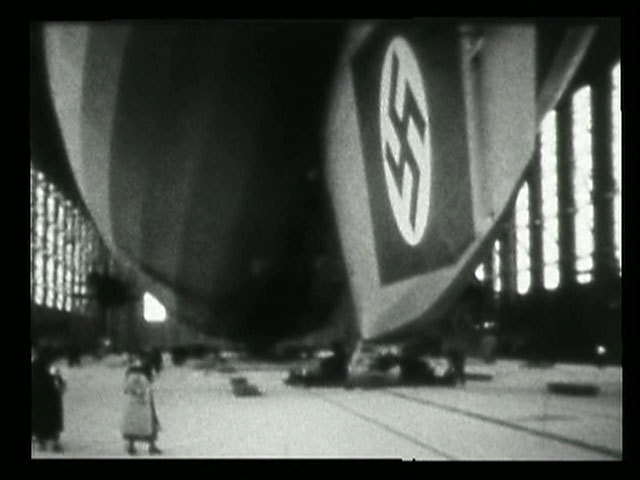 This 1936 home movie of the German dirigible Hindenburg was taken by a vacationing American family. The now unidentified group must have been among the only five hundred passengers who made the ten trips from Frankfurt to New Jersey during the Hindenburg’s single year of operation. At 804 feet long, it was the largest rigid lighter-than-air craft ever constructed and could reach eighty-four miles per hour with the four diesel-driven propellers seen in the footage. Captured by the amateur filmmakers are the elegant dining room, observation salon, and control gondola. As was a practice in early home movies, the family edited in intertitles (commercially produced from text supplied by filmmakers). Less common in the thirties is the brief color footage also edited in.

The Hindenburg’s spectacular demise at its first 1937 landing, in which thirty-six passengers and crew were killed, occurred at the Lakehurst Naval Air Station, seen here the previous year. Although it was speculated in Germany that the Hindenburg fell victim to an anti-Nazi plot, the likely cause was static electricity discharge in conjunction with flammable hydrogen gas leaking from the tanks that kept the Hindenburg aloft. After the disaster its sister ship the Graf Zeppelin was decommissioned, and so these home movies preserve the last days of commercial travel by dirigible. —Scott Simmon

About the Music
For the Hindenburg’s journey over the Atlantic, the music is drawn from one of Emil Waldteufel’s most appealing waltzes, “Les Sirènes” (1878)—a match to these scenes of leisurely, buoyant travel. As a counterbalance, for the scenes of send-off and arrival, lively songs and marches were used, most notably “The Gladiators’ Farewell” (1906), by Hermann Ludwig Blankenburg. Its grandiose second strain seemed to work well both for the majesty of the zeppelin and for the darker implications of this film, which today are inescapable, and problematic, for any musician. —Martin Marks

About the Preservation
Both films were preserved in 1999 through Treasures of American Film Archives funding.