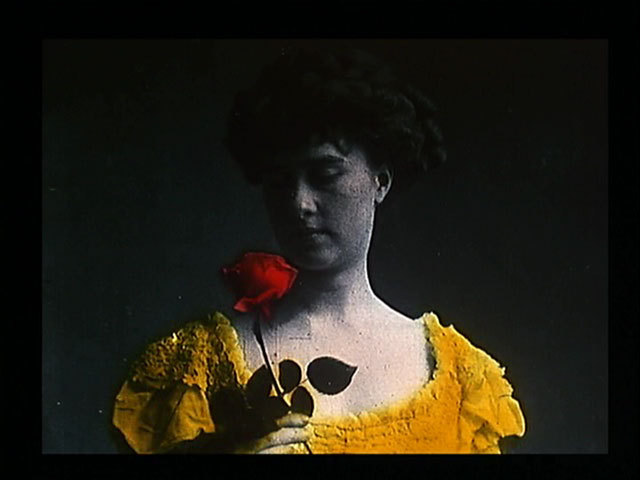 Although no one person “invented” the movies, Thomas Edison—along with his key employee W.K.L. Dickson—can claim credit for refining experimental ideas into patents that controlled the first decade of moviemaking in America.

Three American Beauties is colored by stencil, a more common process in France than in America. Color was painted on release prints using a separate cut-out stencil for each color. The brief, patriotic film was shown in nickelodeon theaters at the end of a program, and proved so popular that Edison’s original negative wore out and had to be shot again, complete with in-camera dissolves. The Museum of Modern Art preservation copy reproduced here is probably from the first version, shot by Edwin S. Porter and Wallace McCutcheon in New York in March 1906. Porter remade the film in September 1907. —Scott Simmon

About the Music
Two pieces are joined, each a song hit of the day, with titles and lyrics appropriate to the fleeting images: a sentimental waltz, “Sweet Rosie O’Grady” (Nugent, 1896), and a stirring favorite, “You’re a Grand Old Flag” (Cohan, 1906). —Martin Marks

About the Preservation
Three American Beauties was preserved by MoMA from a stencil-colored nitrate print.

Further Viewing and Reading
The essential four-disc DVD collection of 140 Edison company films preserved by the Museum of Modern Art and the Library of Congress is Edison: The Invention of the Movies (Kino, 2005). For a history of Edison’s and Porter’s early filmmaking, see Charles Musser, Before the Nickelodeon: Edwin S. Porter and the Edison Manufacturing Company (University of California Press, 1991).