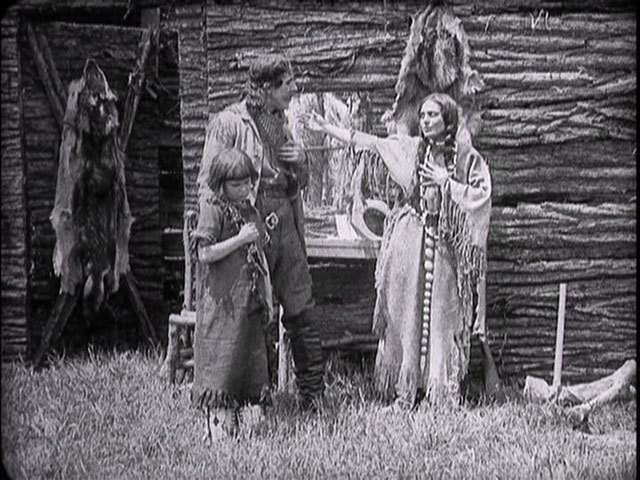 White Fawn’s Devotion has been called the earliest surviving film directed by a Native American. Released in June 1910, it is also among the first films made in America by France’s Pathé Frères, then the world’s largest film production company.

U.S. motion picture trade journals, in a battle both cultural and economic, had ridiculed the English saddles and gingham-shirted Indians in Pathé’s European-made Westerns. Pathé’s an­swer was to open a studio in New Jersey and hire as director of its Westerns a Native American, James Young Deer. After Pathé opened a Los Angeles branch, Young Deer would be promoted to its gen­eral manager.

Allegedly born in Nebraska of Winnebago ancestry (not true, as recent research shows), James Young Deer had trouped the country with Wild West shows and circuses before landing roles in film Westerns, sometimes alongside his wife, Lillian St. Cyr (a Winnebago with a long career under the name Princess Redwing). For Kalem, Lubin, and other early companies, Young Deer also penned Western scenarios. In part because he was never given credit on-screen for any of the approximately 120 films he directed for Pathé between 1910 and 1913, James Young Deer has become a completely forgotten figure, and his films are impossible to attribute with certainty. Only about six are thought to survive in U.S. archives.

White Fawn’s Devotion, like almost all American Westerns before it, was shot in the East. As with several other Young Deer films (to judge from their plot descriptions), it draws from the popular 1905 stage melodrama The Squaw Man—about a Briton whose Indian wife sacrifices herself by suicide—but alters the outcome significantly. In White Fawn’s Devotion a Briton named Combs, his Indian wife, White Fawn, and their daughter live in a Dakota log cabin. When Combs makes plans to claim “an unexpected legacy,” White Fawn fears he is leaving forever with their child and attempts suicide. The daughter, finding her father bent over her mother holding a bloody knife, mistakenly reports murder to her Indian grandfather. After the chase by the tribe, Combs is set for execution at the hands of his reluctant daughter, until White Fawn—who has only wounded herself—arrives to set things right.

For all its simple pantomime style, White Fawn’s Devotion arrives at a conclusion almost unknown in the era’s film or fiction: The interracial couple live happily ever after. The surviving print, preserved by the Library of Congress, is missing a few feet at its end, and Pathé’s publicity fills in the resolution: “The Combs take their departure and return to their home, for he feels he will be happier with his family on the plains than if he goes east and claims his legacy.” It was only when Young Deer reversed the sexes of the interracial couple that reviewers were outraged. About (the unfortunately lost) Red Deer’s Devotion, which Young Deer shot in the West in 1911, Moving Picture World said: “Another feature of this film will not please a good many. It represents a white girl and an Indian falling in love with each other. While such a thing is possible, and undoubtedly has been done many times, there is still a feeling of disgust which cannot be overcome when this sort of thing is depicted as plainly as it is here.”

Between 1908 and 1912, Native American images were seen more widely on movie screens than ever again. In 1913, Moving Picture World reported that “Indian dramas... are played out” and that film companies were hanging NO INDIANS WANTED signs. That is also the year that James Young Deer—who surfaced briefly in the British and French film industries—essentially vanished from the American movie business. —Scott Simmon

About the Music
Nearly every collection of silent movie music published in America (and many published abroad) contained pieces designated as “Indian Music.” Their number is tremendous, yet almost all share a few stereotypical features, which most of us still recognize. For more than a hundred years—from nineteenth-century Wild West shows and stageplays to many a Western feature or TV series—they have been drummed into our ears, and only in recent decades has their hold begun to weaken.

Probably no one would wish for an out-and-out revival of such music, but it is important to know how it once did flourish, in large part owing to the above-mentioned popularity of films such as White Fawn’s Devotion. That is why my score is based entirely on pseudo-“Indian” pieces, most of them published within a few years of the film. Some are lyric, like the “Indian Love Song” by J.S. Zamecnik, taken from the second volume of his seminal series Sam Fox Moving Picture Music (1913), and the “Omaha Love Song (traditional),” from the Remick Folio of Moving Picture Music (1914). Some are noisy action pieces, like the “Indian Agitato” by Otto Langey (1918, recommended for “Indian emotional scenes, rivalry, jealousy, expectancy, apprehension, etc.”). Because these pieces have much in common, they are easily interwoven, making the score sound like a fantasia upon a very few “Indian” themes. —Martin Marks

About the Preservation
A nitrate print of White Fawn’s Devotion was located in the New Zealand Film Archive and repatriated through the American Film Institute to the Library of Congress.