Please answer both questions below to proceed to the video. Thank you.
EXCERPT FROM 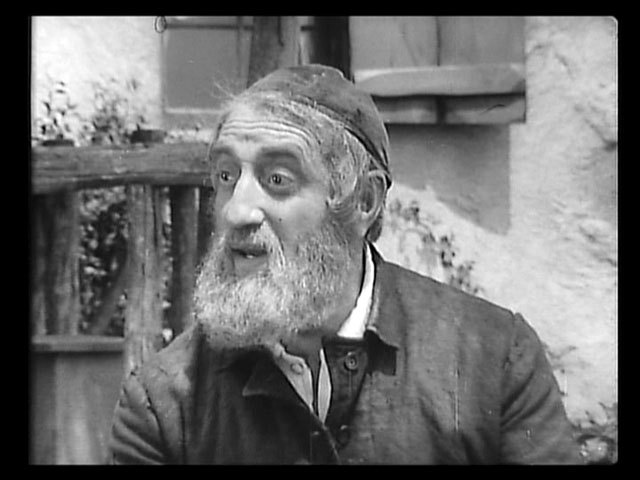 Tevye, a contentious masterwork within the little-known U.S. Yiddish-language cinema, re-created the nineteenth-century Ukraine on a 130-acre potato farm near Jericho, Long Island, in the summer of 1939. (Yiddish cinema flourished also between the World Wars in Europe, especially in Poland and Austria.) Produced by Harry Ziskin, co-owner of the largest kosher restaurant in Times Square, Tevye had a seventy-thousand-dollar budget, tiny by Hollywood standards but lavish compared with the sixteen-thousand-dollar average for Yiddish features in the thirties. With its professional look and full orchestration, Tevye had high aspirations.

The on-screen title awards possessive credit to the celebrated Russian Jewish author of the Tevye the Dairyman stories: “Sholem Aleichem’s Tevye.” Father of seven troublesome daughters, Tevye was Aleichem’s best-known character, the much beset voice of eight monologues published between 1895 and 1914. The film’s guiding auteur, however, is director Maurice Schwartz (1890–1960), who also plays the title character and wrote the screenplay based on his 1919 stage success with his Yiddish Art Theater. Two of Tevye’s daughters in the Aleichem stories—one who elopes to Siberia with a revolutionary and an­other who marries a Christian—are combined in the film’s Khave (played by Schwartz’s niece, Miriam Riselle). In the relatively self-contained ex­cerpt seen here—which begins about fifteen minutes into the film—the con­flicts are generational (father versus daughter), political (tradition versus the thought of Tolstoy and Gorky), and religious. This last clash between Jews and Christians makes Tevye rare even in Yiddish cinema. While by convention the village priest and Khave’s Christian sweetheart speak fluent Yiddish, the two characters’ broad accents are part of the satire.

The film plays out—in scenes not included here—in a way to demolish Khave’s youthful optimism about religious tolerance and ethnic harmony. Not long after her Christian wedding, the pogrom predicted by Tevye arrives: The now widowed Tevye has a day to flee the village; Khave abandons her husband and throws herself in front of her father’s wagon. Reluctantly, he allows her to join him on the road to Palestine. One must wait for the Hollywood musical version, Fiddler on the Roof (1971), for an assimilationist ending, in which Tevye reluctantly blesses his daughter and her Christian husband before departing with his wife for America.

Tevye’s Christian characters, all threatening or slightly dim-witted, provoked outcries in the U.S. Yiddish press: Morgn Frayhayt lamented the “cheap Jewish chauvinism” in scenes it called “insulting—not for the goyim but rather for the dignity of a Yiddish film and of Jewish artists.” Still, there’s an uncompromising point of view here, possible only in American independent cinema. Back in 1936, Schwartz had proposed filming in Poland, but producer Joseph Green recognized that the intermarriage subject would be impossible given that country’s rising anti-Semitism. There is also something prescient and chilling in the 1939 filming of the final scene excerpted here, when Tevye argues with his daughter about whether their Christian neighbors could ever join a persecution of the Jews. Because the production ran a few days over schedule, Leon Liebgold, who plays Khave’s husband, Fedya, was forced to delay his Atlantic crossing to look into the situation of his Polish family. In the event, he couldn’t leave America at all. Before the film wrapped, Poland had been invaded by Hitler.—Scott Simmon

Availability of the Complete Film
Tevye is among the many subtitled Yiddish-language films that the National Center for Jewish Film has made available for sale on DVD and for rent on 16mm and 35mm film. The full catalog and ordering information is online at the NCJF website: www.jewishfilm.org.