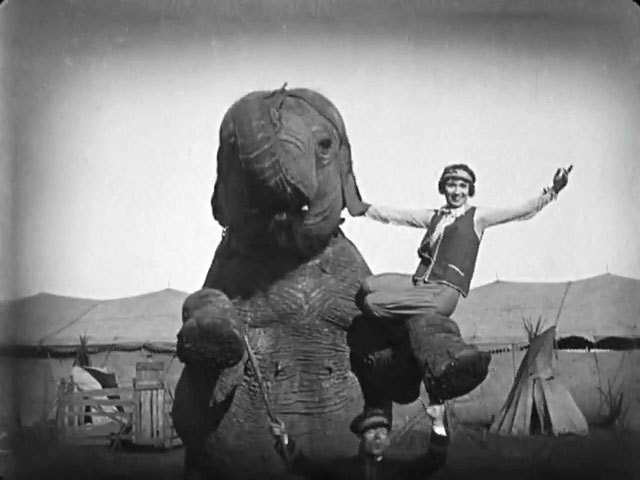 In 1881, when George Washington Miller (1842–1903) first branded his cattle with “101,” little could he have known that he was establishing one of the most celebrated names in Wild West entertainment. His 101 Ranch started off on traditional lines, growing to some 100,000 acres and raising wheat, cotton, corn, alfalfa, fruit, vegetables, bison, hogs, poultry, and horses as well as cattle. But in 1905, after his death, Miller’s sons hosted “Oklahoma’s Gala Day” in Bliss, Oklahoma for the National Editorial Association. Part rodeo, part reenactment—and all show biz—the festivities celebrated the skills of real-life cowboys and Native Americans and even boasted an appearance by Geronimo, who killed a bison from a moving car. The event proved such a hit that the Miller Brothers’ 101 Ranch Wild West took to the road in 1907, performing across the United States, Mexico, Canada, Europe, and South America.

Alert to new opportunities, the Millers diversified into motion pictures. In 1912, the New York Motion Picture Company arranged to use their Wild West gear and performers to make “Bison-101 Ranch” Westerns in the grasslands above Santa Monica, California. For authentic Oklahoma locations, Hollywood movie companies went to the original 101 Ranch near Ponca City where such films as Paramount’s North of 36 (1924) and Pathé’s Wild West (1925) were shot. By 1925, the Oklahoma complex had become a tourist destination, attracting some 100,000 visitors yearly.

The Big Show, the only feature-length motion picture produced by the Miller Brothers, is a behind-the-scenes melodrama set within their show. The story is nothing special: John Lowell, as Bill, a war veteran who has been defrauded by his brother, rescues Ruth, the elephant girl (Evangeline Russell) and joins the company. Secretly engaged to Bill’s “bad brother” Norman—allegedly an oil millionaire—Ruth rebuffs her rescuer’s affection. Her elephant, however, knows a villain when he smells one and eventually gives Norman his just deserts. (Moral: Never feed an elephant tobacco!) The film closes with Ruth and Bill pledging marriage.

The backstage tale weaves in more characters, intrigues, and rescues, but the true pleasures come from watching the Wild West performers in action. Animal tamers, cowboys, Indians, the snake girl, clowns—all are there, including Col. Joseph Miller, who plays the show’s manager. The scenes of setting up camp and packing for the next town play like documentary footage—as it probably is. Indeed, when a fire ravaged the company’s rail cars, the Miller Brothers started the cameras rolling and built the fire into the story.

The Big Show seems to have been intended to celebrate the Miller Brothers’ 101 Ranch Wild West’s triumphant revival. The show, which had stopped touring during World War I, returned to the road in 1925. At the film’s release the following spring, reviewers applauded the six-reeler as a “good one for the kiddies” and predicted cross-promotional opportunities for the Wild West troupe. But tastes had changed. Business plummeted in 1926 after a storm crushed the big top in Erie, Pennsylvania, killing one show-goer and injuring dozens more. The Millers went into debt and lost the 101 Ranch in the early 1930s. Today little remains beyond a historic marker at the site—and such documentary evidence as this long-forgotten feature, The Big Show.

About the Preservation
The Big Show was reconstructed by piecing together the best quality material from two sources: two reels held by the Academy Film Archive and the six-reel print from the New Zealand Film Archive. Using a video copy of the eight reels, preservationist Brian Meacham compared the two sources side by side to determine whether the AFA’s material was of better quality or featured different footage. It became clear that while the continuity of AFA material did not make much sense on its own, the two reels contained shots and intertitles omitted from the NZFA print. By reinserting this material, he was able to make the reconstruction as complete as possible.

The preservation work was handled by Colorlab Corp., under the direction of the Academy of Motion Picture Arts and Sciences, and funded as part of a Save America’s Treasures grant, secured by the NFPF.

Further Reading and Viewing
The Invaders (1912), shot in Santa Monica with performers and gear from the 101 Ranch, features Native Americans playing themselves with convincingly understated directness. This Western is featured in NFPF’s DVD set More Treasures from American Film Archives.