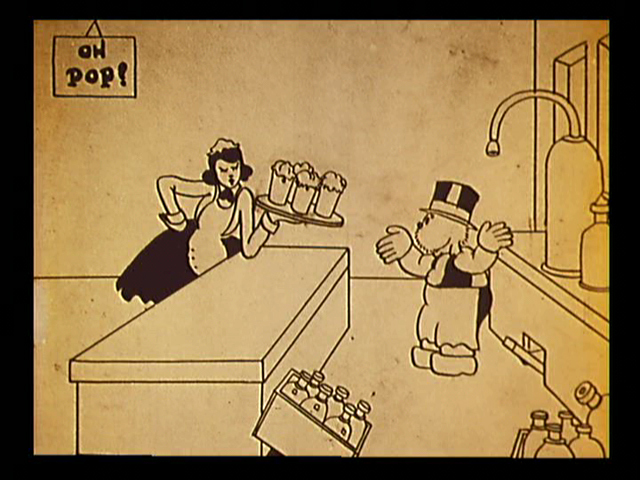 As the feature-length film became central to a night at the movies, exhibitors sought a “balanced” program with a range of additional offerings, including serials, short comedies, newsreels—and animated cartoons. Only a few such cartoons had been filmed before 1914, but with such laborsaving innovations as transparent celluloid and printed backgrounds, they became a regular offering.

The title of this 1919 cartoon puns, of course, on the historical epic of four years previous, The Birth of a Nation. But its subject is tied precisely to its year and, indeed, to its release on June 29. Lobbying by the Anti-Saloon League had brought congressional enactment of an ostensibly temporary “war­time” national prohibition law, which came into effect on July 1, 1919. Hence the cartoon opens with flipping calendar pages: “June 30” with its drawing of a beer stein and “July 1” with its raspberry float. With the Eighteenth Amendment coming into force in January 1920, the prohibition era was effectively under way.

Badly affected by this ban is the dog-faced character Judge Alexander Rumhauser—Judge Rummy to his friends—who began life in a 1910 newspaper cartoon strip called Silk Hat Harry’s Divorce Suit, written and drawn by “Tad,” the pen acronym of Hearst sports columnist and cartoonist Thomas A. Dorgan. As the strip continued intermit­tently into the 1920s, it was retitled Judge Rummy’s Court for its now central character. In The Breath of a Nation the judge is off the bench and under the literally withering gaze of his wife, who proposes him as the “horrible example” for a temperance lecture called “The Horrors of Drink.” Fortunately, Judge Rummy’s dog-faced pal Silk Hat Harry runs a soda fountain that dispenses a virile “substitute” (for, that is, now illegal alcohol), which has mice bullying cats and effete men growing manly.

The film was directed by twenty-seven-year-old Gregory La Cava, a former political cartoonist who had overseen all the animated cartoons at the International Films Service studio in New York ever since William Randolph Hearst had founded it in 1915 as a way to exploit cartoon characters owned by his press syndicate. To judge from surviving films, too many early animated cartoons from every studio were cheaply made, deeply unimaginative, and painfully unamusing. Even at the time, considerable hostility was expressed toward them by exhibitors. Perhaps audiences tolerated them because they lasted only a few minutes or because of fondness for the newspaper originals from which virtually all the first movie cartoon characters were derived. La Cava’s initial years at International had their share of dull animation—as in the Joys and Glooms series —but also included the surreally simple and imaginative Krazy Kat series.

The Breath of a Nation’s gag-filled wit and full-body drawing style is due also to La Cava’s friend from his Art Institute of Chicago days, Grim Natwick, who animated the leggy bar girl and probably much else in the film. (In his long career, Natwick’s most memorable creation was Betty Boop.) If La Cava followed his usual practice at this time, he would have drawn storyboards for the film and collaborated on its animation.

La Cava would abandon cartoons for live-action directing less than a year later. He continued to work best through an improvisational spontaneity increasingly at odds with Holly­wood studio executives. Like Judge Rummy, La Cava was known to enjoy his drink, and alcohol-induced freedoms regularly
propel his films, including Stage Door (1937), Unfinished Business (1941), and So’s Your Old Man (1926), which includes W.C. Fields’s three-day drunk on roach-exterminator fluid. In La Cava’s masterwork, My Man Godfrey (1936), Godfrey has sworn off the stuff, but the film still evokes the anarchy and social edge of the director’s early animated cartoons.—Scott Simmon

About the Music
The ensemble here consists of Mark Harvey, leader and trumpet; Peter Bloom, flute; Phil Scarf, saxophone; John Funkhouser, string bass; Harry Wellott, drums; and Tim Ray, piano. Harvey, who teaches jazz studies at MIT, is the founder, music director, and principal composer for the Aardvark Jazz Orchestra. He and the five other musicians, also from Aardvark, improvised this score by doing what jazz musicians so often do—jam and have fun. At my suggestion they took as their point of departure a topical 1919 ditty by Carl Zerse, “I’ve Got the Prohibition Blues (for My Booze),” which they play down and dirty at the start of the film. Right after that the music becomes distinctly more far-out, and even Ivesian at times. But even if this is not a traditional score, the mocking and pixilated music has plenty of wit. The film goes down easy enough on its own, but with this chaser of a score it packs real punch.—Martin Marks

Further Viewing
Policy and Pie (1918), a Katzenjammer Kids cartoon directed by Gregory La Cava, can be downloaded or streamed from the Library of Congress's Origins of American Animation website, along with seven shorter 1916 films he supervised at the Inter­national Films Service. Those films are also in the collection of twenty-three cartoons preserved by the Library of Congress available on VHS as Origins of American Animation, 1900–1921 (Smithsonian/Unipix) and on DVD in the Origins of Film anthology (Image).