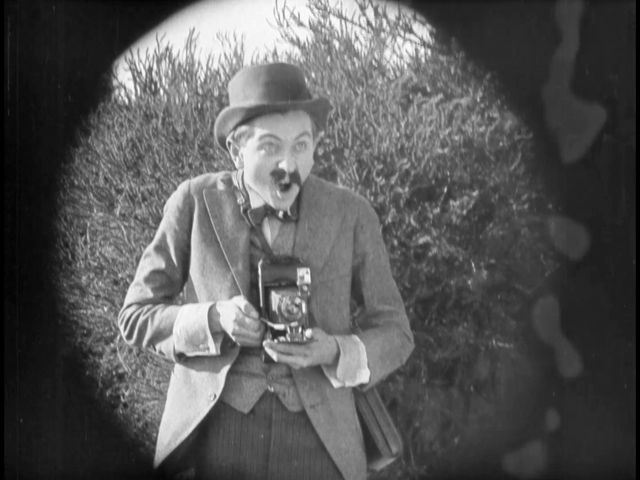 In 1916 Mack Sennett was “the King of Comedy,” and a third of the Triangle Film Corporation (with D.W. Griffith and Thomas Ince). Sennett’s comedies were such breadwinners for Triangle that the company initiated their own series of one-reelers. Dubbed Triangle Komedies, they were supervised by Sennett’s managing director Hampton Del Ruth and “borrowed” Sennett players and behind-the-scenes personnel who were between assignments. The four headliners of The Camera Cure appeared in many of the Komedies, and are overlooked silent comedy stalwarts.

The well-to-do lady of the house is Dale Fuller, an eccentric comedienne as well as a dramatic actress. Having an extensive stage background, she was brought to films by Sennett in 1915. Usually playing unattractive wives or overbearing mothers in shorts like Bath Tub Perils (1916), she appeared frequently in the Triangle Komedies, staying with Triangle after Sennett’s departure in items like A Lady Killer’s Doom (1918).

Blonde ingénue Maude Wayne plays the pretty maid that much of the commotion is about. Joining the Komedies unit in 1917 for shorts such as Innocent Sinners (1917), and A Playwright’s Wrong (1918), she did a few Triangle features before moving to Fox Sunshine Comedies like Back to Nature Girls (1919). The rest of her career was spent as support in mostly dramatic features, with a few comedies that included Fixed by George (1920), The Bachelor Daddy (1922), and Roscoe Arbuckle’s European-released Leap Year (1921).

The difficult husband of the story is the forgotten George H. Binns. British-born and a vaudeville favorite with his brother Bert as “Binns & Binns” (“The Vagabonds of Comedy and Music”), their first movie foray was supporting Florence Lawrence in The Spender (1913), and Vitagraph’s Tubby Turns the Tables (1916). Going to California he signed with Sennett, and was seen in shorts such as His Domestic Deception (1917), and The Kitchen Lady (both 1918). Binn’s trademark was a bobbing Adam’s apple (on stage he wore a bell around his neck and made it ring) – on display in The Camera Cure. Starring in the Triangle Komedies, and playing ensemble in Sennett two-reelers, Binn’s career was cut short in 1918 when he died of influenza.

Mal St Clair, the wronged valet and husband, is known from silent films, but as a director. St Clair bounced around early as an office boy at Universal and a cartoonist on The Los Angeles Express before getting in at Keystone. Tall and skinny, he started in front of the camera but eventually ended up directing. Soon helming shorts for Buster Keaton, and Mr. & Mrs. Carter De Haven, he teamed up with a young Darryl F. Zanuck and created the first hits of canine star Rin Tin Tin.

Starting with Are Parents People? (1925), St Clair directed some of the most sophisticated comedy features of the 1920s – A Woman of the World (1925), The Grand Duchess and the Waiter (1926), and Gentlemen Prefer Blondes (1928). This was the peak of his career, as his work took an immediate dip with the arrival of sound. Through old pal Zanuck he found a permanent berth at 20th Century Fox, where he directed four of Laurel & Hardy’s 1940s features, and revisited his slapstick roots working on the Mack Sennett tribute Hollywood Cavalcade (1939).

Short and sweet, The Camera Cure owes a debt to previous shorts like With a Kodak (1912) and Fatty at San Diego (1913), where a photograph or newsreel footage is used to expose the made-up story of an errant husband. This theme would turn up in later comedies, most famously the Laurel & Hardy feature Sons of the Desert (1933).

Never on solid footing, Sennett, Griffith, and Ince fled Triangle in 1917. The Triangle Komedies continued into 1918, but when the company folded the next year, they were already a forgotten footnote in silent comedy history.

—Steve Massa, film historian and author of Rediscovering Roscoe: The Films of “Fatty” Arbuckle, Slapstick Divas: The Women of Silent Comedy, and Lame Brains and Lunatics: The Good, the Bad, and the Forgotten of Silent Comedy.

About the Preservation
The Camera Cure was preserved by the George Eastman Museum through a 2009 grant from the National Film Preservation Foundation.

About the Music
A resident accompanist at the Museum of Modern Art and the Library of Congress’ Packard Campus Theater, Ben Model has performed live scores for silent films for more than 35 years at film festivals, universities, museums, and historic theaters around the country. His scores can be heard on numerous releases from Kino Lorber, his label Undercrank Productions, and on TCM. He is also the producer, pianist and co-host (with Steve Massa) of The Silent Comedy Watch Party live-stream on YouTube. For more information about his work, please visit his website.