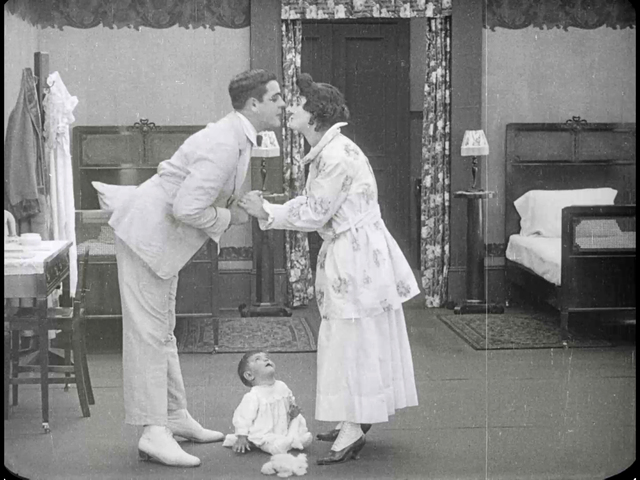 The Vim Comedy Company was founded by Louis Burstein, an overlooked but busy figure in early American cinema. Originally a lawyer he seemed something of a facilitator – easing litigations between the Patents Trust and various independents, as well as settling a long-time feud held by producers Carl Laemmle and Pat Powers. Also involved with the New York Motion Picture Co. (the founders of Keystone), he was in charge of production for the Reliance Studio. It was there that Burstein joined forces with comedians Bobby Burns and Walter Stull, and set up Wizard Films to star them in one-reelers. Burns and Stull had starting working together at Lubin, and eventually became a team known as Pokes & Jabbs. In 1915 Burstein put together Vim for their pictures. First setting up shop in Bayonne, New Jersey, the outfit soon settled in Jacksonville, Florida and took advantage of its sunny locations for comedy backdrops.

While Pokes & Jabbs were the studio’s original headliners, the Vim Company also included Oliver Hardy, who was paired with diminutive Billy Ruge for a series of Plump and Runt comedies, Marcel Perez, Kate Price, “Spook” Hanson, and the team of Harry Myers and Rosemary Theby. Like Bobby Burns and Walter Stull, Myers and Theby had been with Lubin. Myers made his debut there in 1910 after many years on stage. Originally a handsome dramatic star, he was soon doing more and more comedies. Theby was a brunette beauty who had trained for the stage but never appeared there. Instead a friend took her to the Vitagraph Studio, where she worked from 1910 to 1913 in shorts such as Father’s Hot Toddy (1912), and from there appeared at Reliance.

They began working together at Lubin in 1914 and by the next year were a popular team, making clever, domestic situational comedies in the style of Vitagraph’s Mr. & Mrs. Sidney Drew. Myers directed their shorts, which were regarded as “Refined comedy of a high order.” Catching on at Lubin, they moved to the Victor Film Co., and then arrived at Vim and Jacksonville in mid-1916. After a month or so of working there they moved to Providence, Rhode Island, where Vim had access to the city’s Eastern Film Corporation’s studio. The Chalk Line was made in R.I., and contains a couple of shots of downtown Providence.

One of the very few Myers-Theby comedies to exist, the concept of divided living arrangements has antecedents in Alice Guy Blanche’s A House Divided (1913) and a surviving Kinemacolor short where a battling Weber & Fields divide their delicatessen in half. The stars have support from Jennie Nelson and George Reehm. Both had started their careers at Lubin, with Nelson also working at Gaumont, Victor, and Jaxon. George Reehm had been connected to Bobby Burns and Walter Stull, and worked as a comedian and assistant director. On hand in The Chalk Line to provide some physical comedy with Harry Myers, Reehm worked in scenario departments and as an assistant director until 1927.

Vim closed its doors in 1917. Myers & Theby took over the Jacksonville facility for their own productions which were distributed by Pathe. In 1918 they dissolved their screen partnership and worked separately for many years, Myers as a busy character comedian, best known as Charlie Chaplin’s drunken millionaire friend in City Lights (1931). Louis Burstein went on to produce a series of King Bee Comedies that starred Chaplin imitator Billy West. After changing his last name to Burston he made serials and features, but was killed in a 1923 accident when his car hit a train.

—Steve Massa, film historian and author of Rediscovering Roscoe: The Films of “Fatty” Arbuckle, Slapstick Divas: The Women of Silent Comedy, and Lame Brains and Lunatics: The Good, the Bad, and the Forgotten of Silent Comedy.

About the Preservation
The Chalk Line was preserved by the George Eastman Museum through a 2005 grant from the National Film Preservation Foundation and donated services from CinemaLab.

About the Music
A resident accompanist at the Museum of Modern Art and the Library of Congress’ Packard Campus Theater, Ben Model has performed live scores for silent films for more than 35 years at film festivals, universities, museums, and historic theaters around the country. His scores can be heard on numerous releases from Kino Lorber, his label Undercrank Productions, and on TCM. He is also the producer, pianist and co-host (with Steve Massa) of The Silent Comedy Watch Party live-stream on YouTube. For more information about his work, please visit his website.