The Dairy Industry and the Canning of Milk (1917) 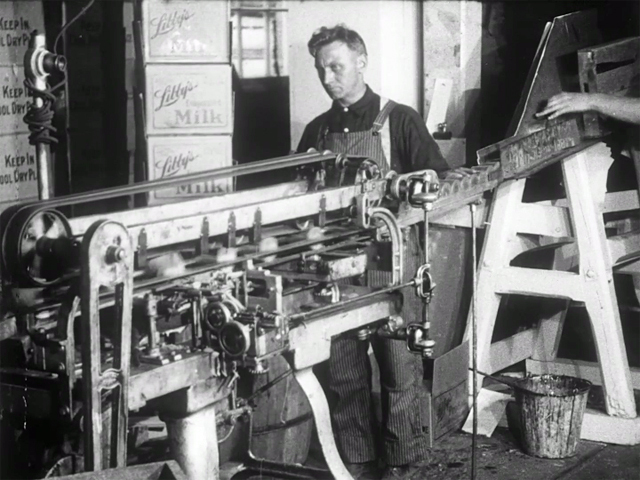 The industrial film The Dairy Industry and the Canning of Milk, produced around 1917, documents the technology of canning evaporated milk at the Libby, McNeill & Libby Company’s Chicago plant. The film was most likely made as an industrywide effort to quell fears of unsanitary conditions in the food processing industry. The use of stenciled color helps set this early industrial film apart.

The industrialization of food processing in the late 1800s and early 1900s lowered costs, raised availability, but posed health risks to consumers. Books like Upton Sinclair’s popular 1906 novel The Jungle (an exposé of the Chicago meatpacking industry) as well as earlier concerns about adulteration of patent medicines made many consumers question the safety of prepared food. Government intervened by passing inspection regulations in the form of laws like the 1906 Pure Food and Drug Act and the 1907 Meat Inspection Act. Industry also sought to quiet public fears by distributing educational films and advertisements and offering tours of its factories (where employees in uniform gave the impression of hygienic safety).

Libby, McNeill & Libby was a canning company pioneer founded in 1875 in Chicago. Its first product, corned beef, was heavily marketed and packaged in a distinctive trapezoidal can. Later it expanded into the canned milk market (first developed by Borden in 1855). The shelf stability of canned evaporated milk (60 percent of water removed) made it attractive to people concerned about spoilage.
The film follows the path of raw milk delivery to the dairy and processing into a final consumer product. At all stages, the scientific modernity of the dairy operation is stressed and the hygienic conditions featured. Most of the workers wear white uniforms. The end of the film covers a small portion on cows and the healthy conditions under which they are raised.

About the Preservation
The Dairy Industry and the Canning of Milk was preserved in 2015 at Colorlab Corp. using a 35mm stencil-colored nitrate print from EYE Filmmuseum. The intertitles were translated from the Dutch and are modern re-creations. The work was supervised by the National Museum of American History, Smithsonian Institution, and funded through a National Endowment for the Humanities grant secured by the NFPF.

About the Music
The new music for this presentation was composed and performed by Michael D. Mortilla. Michael has been composing professionally for more than four decades and has accompanied silent film screenings throughout the United States. Among his many NFPF projects are the accompaniments for the DVDs Treasures 5: The West and Lost and Found: American Treasures from the New Zealand Film Archive. The score for The Dairy Industry and the Canning of Milk was improvised in one continuous “take” in order to recreate the live experience of an audience at the time of the film’s original release. According to Michael, “the creative process involves running through the film repeatedly, recording most of the performances. A typical piano solo for a one-reeler like this usually requires about 14 takes to arrive at the final musical work. There is little to no editing of my performances, and absolutely no editing of the score’s overall structure.”