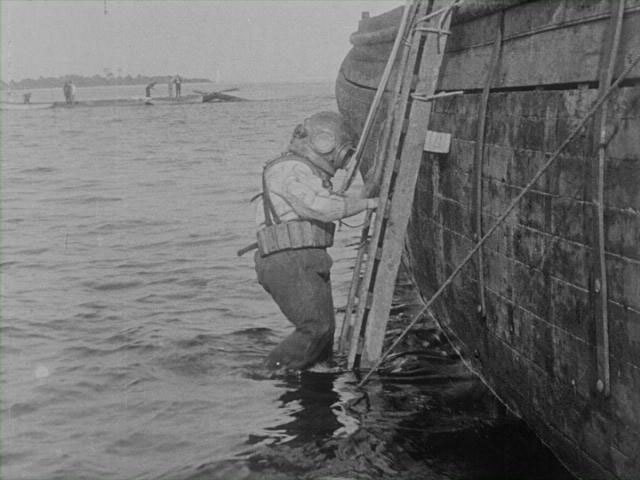 One of the pioneering companies of the film industry, Kalem was formed in 1907 in New York City by George Kleine, Samuel Long and Frank Marion, who created their new studio’s name from the first letters of their surnames. The next year they set up shop in Jacksonville, Florida, where they could shoot “outdoor” films year round. An early educational effort, The Diver illustrates the complexities of deep-sea diving, then a vital part of marine salvage operations.

Deep-sea diving goes back as far as the early 18th century, with the development of experimental atmospheric suits. Although we don't know of the first instance of the filming of a deep-sea diver at work, this footage from 1911 is certainly one of the earliest. Shot at the mouth of Florida’s St. John’s River, it demonstrates the careful preparations necessary for a successful dive. The process starts when the diver’s lifeline — the air pump — is put in place. Then the diver begins the laborious process of suiting up with the help of his assistant. We see him pull on the outer suit, secure the 40-pound metal helmet, attach the leggings, and don seven-pound metal shoes to facilitate underwater walking. The diver is further fitted with a 90-pound lead belt to counter water’s natural buoyancy. Only then does he make his descent into the river and slip from our view. The film moves on to show other members of the party exploding an old shipwreck to help build a permanent reef. The film concludes with our diver climbing shipboard after his successful dive.

Unfortunately, we are unable to catch a glimpse of the diver in action below the river's surface. Motion pictures cameras were not yet capable of filming underwater. However, this advance was not far off. In 1914 the first successful underwater footage was showcased in the Williamson Brothers’ Thirty Leagues under the Sea. This technical achievement set off an early flurry of undersea filmmaking for such movies as Jules Verne’s 20,000 Leagues under the Sea (1916), The Submarine Eye (1917), and chapters of the Thanhouser serial The Million Dollar Mystery (1914).

Reviews of The Diver in the trades were quite complimentary. Moving Picture World called this 1911 documentary a “remarkably interesting film”, and Nickelodeon wrote that it “was bound to hold and please the attention of its audiences.” —Buckey Grimm

About the Preservation
The Diver was preserved under the direction of The Museum of Modern Art from a nitrate print uncovered in 2010 at the New Zealand Film Archive. The work was completed in 2012 by Colorlab Corp. through the support of a Save America’s Treasures Grant secured by the NFPF.

More Information
For more on the history of deep-sea diving, see Take Me Under the Sea: The Dream Merchants of the Deep by Thomas Burgess (Ocean Archives, 1994).