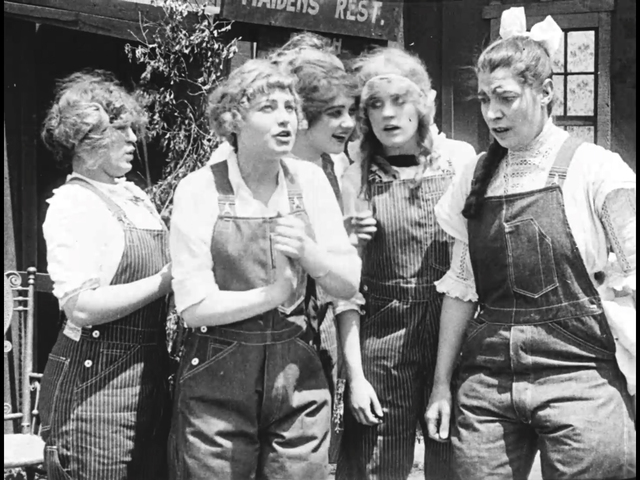 This film and its new music score, along with the following program notes, originally appeared in Treasures 5: The West.

The one-reel gender comedy The Girl Ranchers is part of a wave of stories, sweeping through American popular culture in the early 1910s, about intrepid girls who prove themselves on the land. Hundreds of novels began to be published about such adventures, including several Camp Fire Girls series (in the years after the organization’s founding in 1910) and Girl Scouts series (after 1912).

The “ranch girl” cycle, in print and onscreen, included such films as Flying A’s The Ranch Girl (1911), Pilot’s The Tomboy Ranch Girl (1912), and Kalem’s The Ranch Girls on a Rampage (1912)—all lost today. To judge from surviving examples, Essanay’s The Corporation and the Ranch Girl (1911) may be typical. A railroad company wants a ranch, but the rancher’s orphaned daughter loves the land more than money. “The spitfire won’t sell. Other steps must be taken,” one of the corporate schemers plots in an intertitle, but she will be too much for them. The ranch girl films may have drawn loosely, if without acknowledgment, on Margaret Vandercook’s popular Ranch Girls novels: The Ranch Girls and Their Great Adventure, The Ranch Girls at Boarding School, The Ranch Girls’ Pot of Gold, and others.

Our comedy, The Girl Ranchers, most resembles the first novel in Vandercook’s series, The Ranch Girls at Rainbow Lodge (1911). In both, two sisters inherit a Western ranch and choose to manage it without male help. (They are the “Ralston sisters” in the novels, the “Houston sisters” in the film, where they are played by 19-year-old Marie Walcamp and 20-year-old Ramona Langley.) Released in September 1913, The Girl Ranchers was at least the second girl-rancher comedy from the Nestor company, the first studio located in Hollywood itself and by this time part of the new Universal Pictures conglomerate.

If the film is not, as ads claimed, “one continual scream of laughter,” its amusing stylizations of male and female behavior make for a nicely escalating battle of the sexes. After receiving a telegram that they’ve inherited their uncle’s Rough Neck Ranch, the sisters insist on taking charge. Their mother (Stella Adams) accompanies them west, where the cowboys’ blazing-gun, whipped-horse welcome isn’t enough to discourage them. “NO DARNED SKIRT BOSSES THIS RANCH,” declares the foreman (Nestor regular Lee Moran), but the sisters’ determination to tidy up gets reinforcement from female friends (“MORE DARNED SKIRTS”). We pay little attention to all the cowboys’ being moustached until the new owners post an emasculating warning: “NOTICE: MUSTACHES BEING UNSANITARY, ALL EMPLOYEES OF THIS RANCH MUST BE CLEAN SHAVEN. WE FEAR GERMS MAY REACH THE CATTLE.” After the men ride off in protest, the girls don overalls for ranch tasks—and reveal their incompetence at them.

All this proceeds in what Moving Picture World labeled a “rather breezy” fashion until being resolved with an Indian attack that unites the warring genders. After the battle and race to the rescue (a comic variation on D.W. Griffith’s The Battle at Elderbush Gulch, filmed earlier that year), the women invite the now-shaved “GALLANT COWBOYS” to a closing dance. As Nestor’s publicity put it, “the need and uses of ‘man’ having been deeply manifested,” and the women having proved their worth, the Rough Neck Ranch—alias Maidens’ Rest Ranch—can begin a new chapter.

—Scott Simmon, Professor Emeritus of English at UC Davis, curator of five of the NFPF’s DVD anthologies, and author of The Invention of the Western Film and The Films of D.W. Griffith.

About the Preservation
The Girl Ranchers was preserved by the George Eastman Museum through a 2008 grant from the National Film Preservation Foundation.

About the Music
Film music historian and pianist Martin Marks is Senior Lecturer in Music and Theater Arts at MIT and music curator of four of the NFPF’s DVD anthologies. Among his publications is Music and the Silent Film.