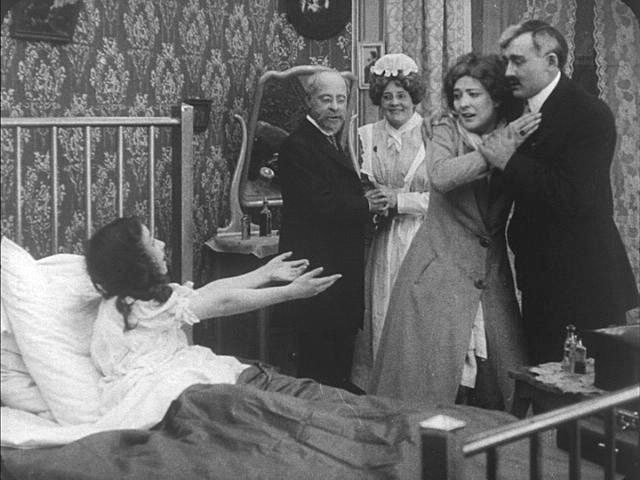 Women’s weepies were a nickelodeon staple in the early years of movies. In these one-reel dramas, women trapped in no-win situations confronted heart-wrenching decisions: Should a young woman wed her penniless sweetheart or accept a rich but loveless match? Should a mother give up her infant so that the child can eat? Should a loose woman risk a glimpse at her son who has been raised by others and is unaware of his birth mother’s shameful past?

In a period that brought more women into the workforce and into movie houses, probably one of the more interesting dilemmas of women’s melodrama, at least to 21st century audiences, involves a mother’s choice of home or career. This is the territory explored by The Greater Call, released by Essanay on December 20, 1910. A successful actress, played by Alice Donovan, leaves the limelight to marry and have a family. But after three years of hearth and home, she is so bored that she returns to the theater. Time passes and in a split screen set-up, we see the excitement backstage, as Donovan calmly dons her makeup, and appreciate why the actress made her choice. However, upon receiving a telegram that her child is dying, she hears “the greater call” and abandons her part mid-play to return to her child’s bedside. A single glance at her mother brings the child immediate recovery and family reconciliation.

Moving Picture World found the picture “emotional and dramatic” but initially questioned why “a woman should refuse to heed the call all those years and then depart so unceremoniously.” But criticizing the lack of realism in a story energized by excess misses the point, as the review itself acknowledges in the next line. “Perhaps this was done to increase the dramatic effect, and if so it succeeds admirably.”

In what appears to be her first screen role, Donovan steals the show: “The leading lady is…the whole picture…The other actors simply assist.” Little is known about the actress beyond her appearance in a number of touring plays starting in 1907 and her identification in a 1911 group portrait of Essanay’s Chicago company. One fan magazine singled her out as “another theatrical star who is shining lustrously in photoplay,” yet she is thought to have played in just two more films, in 1911 and 1912. Like so many other actresses from these early years, Donovan drops out of history, leaving us to wonder if her off-screen life followed fiction and she answered “the greater call.”

About the Preservation
The Greater Call was preserved in 2013 at Colorlab Corp. from a 35mm nitrate release print found at the New Zealand Film Archive. The work was supervised by UCLA Film & Television Archive and funded by the NFPF through the NEA-supported Save America’s Treasures project.