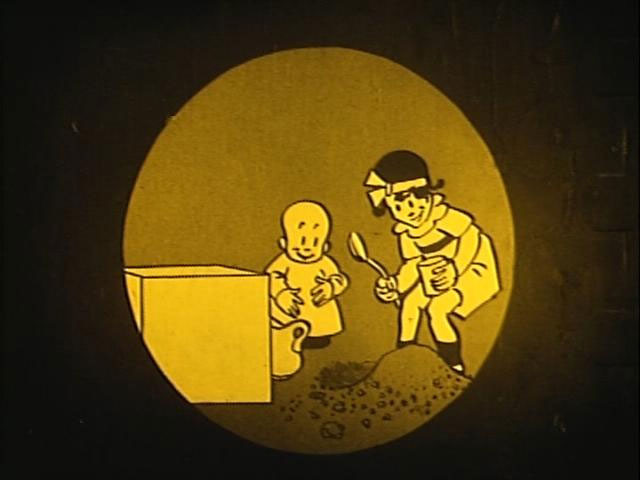 Like so many early animators, Frank Moser (1886–1964), the creator of The Jam Makers, got his start as a newspaper cartoonist. From his desk at the Des Moines Register, the academy-trained artist saw opportunity in New York City. He moved East, switching to movies in the mid-teens, and by 1918 was said to be among the highest paid animators in the industry. The next year Paramount recruited him to produce the Bud and Susie cartoons for its weekly screen magazine.

To judge from the 1919 edge code on the nitrate film print found at the New Zealand Film Archive, The Jam Makers appears to be one of the earliest in the series. The simple story centers on two siblings—little brother Bud and big sister Susie—with a sweet tooth and a hankering for a treat. When Susie concocts “play jam” with dirt and water, Bud cries for the real thing. He spots fresh jam cooling on the kitchen windowsill and, braving a covetous rooster and cat, swaps jars. The kids get their just desserts when Mom offers them the faux jam for a snack. Paramount dropped the series after two years.

A rapid draughtsman, Moser churned out cartoons quickly and developed a reputation for speed rather than wit. In 1929, he went on to cofound Moser & Terry to produce Terrytoons. During his years at the no-frills studio—dubbed the “Woolworth’s” of animation by cofounder Paul Terry—Moser is thought to have produced nearly half the footage of each cartoon. He sold his interest in 1936 and returned to landscape painting, becoming an exhibiting member of the Allied Artists of America, the American Watercolor Society, and the Hudson Valley Art Association.

About the Preservation
The Jam Makers was preserved in 2010 by a UCLA Film & Television Archive–Paramount Pictures team from a tinted 35mm nitrate print found in the New Zealand Film Archive. Thank you Paramount Pictures for funding the preservation work!