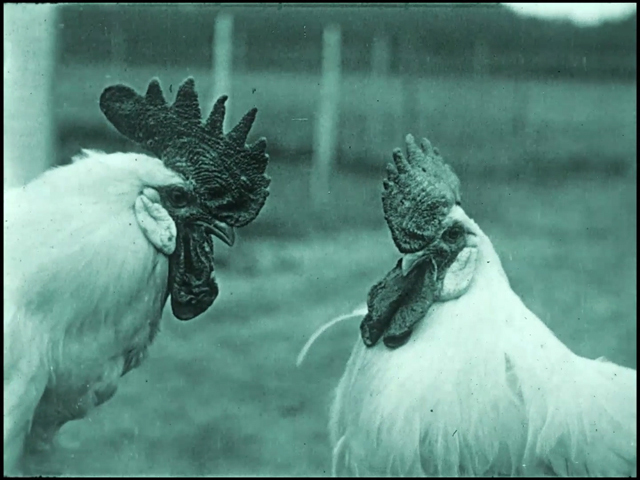 The Last Word in Chickens (1924) celebrates the transformation of how American farmers produced eggs and chicken meat. Prior to World War I, most chickens occupied backyards and barnyards in relatively small numbers, scratching and pecking their way through a diet of bugs, worms, grasses, and food scraps. Chicken meat constituted a very small portion of the American diet, and eggs were, for the most part, available only seasonally, when hens would naturally devote their energies to laying. A hen might lay 30 eggs a year.

Signs of change appeared around Petaluma, California, as early as 1879, when Lyman Byce’s design for a heated incubator rendered the device commercially viable. Meanwhile, breeders, seeking more prolific layers, popularized the White Leghorn, which had been introduced to the United States from Tuscany earlier in the nineteenth century. Petaluma-area poultry farmers, many of them Eastern European-Jewish immigrants, were well on their way to truly industrialized practices.

Around 1920, a sharp drop in agricultural prices and rising land prices furthered the trend toward economies of scale in farming. Raising chickens largely indoors decreased the risk of predation. Artificial lighting tricked hens into year-round laying, as if trapped in an eternal Spring. Mechanical brooders sheltered and warmed eggs and hatchlings that might have preferred to nest with their mothers. Specialized feeds contributed to faster growth. As well, industrialization shifted chicken-raising labor from small operations typically cared for by women to poultry business owners and their mostly male employees. The widespread use of battery cages—in which chickens are stacked and stored in such crowded quarters that no individual hen can stretch her wings—was just around the corner. (Battery caging has been regulated or become illegal in some jurisdictions.)

If Northern California farmers modernized egg production, parallel innovations came about in the production of chicken meat on another coast, on the peninsula known as Delmarva that contains portions of Delaware, Maryland, and Virginia. Industry lore holds that in 1923 Cecile Steele, a farmer’s wife in Delmarva, ordered 50 chicks and received 500 by mistake. She kept them all and began to focus on raising them for meat instead of eggs, increasing her flock to 10,000 by 1926. Others followed suit, using motor vehicles to deliver young live birds speedily to markets in Philadelphia and New York, and adding processing plants in the 1930s to kill and prepare chickens for shipping on ice. Delmarva farmers cornered the growing market for “broilers” until World War II, when the U.S. government commandeered its output to help feed the military, and new corporate endeavors, including Tyson in Arkansas and Holly Farms in North Carolina, successfully captured consumers’ loyalty.

The Last Word in Chickens paints a laudatory portrait of an industry in transition in the 1920s. In opening scenes, hundreds of white chickens (leghorns, almost certainly) rush through a small opening in a building, liberated from the barn to spend sunlit hours in the pasture. These aren’t “old-fashioned” chickens; rather, the result of “scientific” techniques of breeding and feeding. And they aren’t a farming family’s personal flock. They are a massive colony of 15,000 birds housed in barracks. They lay eggs which are plucked from the hens and toted in buckets by workers to an incubation house, where electric lights and mechanized turning of the eggs result in crates full of hatchlings in just three weeks, ready to be crammed into cardboard boxes and trucked to stock other chicken farms. While the film promotes industrial farming techniques, occasional parallel cutting raises some ambiguity about the quality of chicken life under these conditions. For example, shots of a mechanical brooder are juxtaposed to a scene with a gloriously speckled hen—obviously not one of the modernly raised Leghorns—meandering through a grassy field with her baby chicks alongside. Modern mothering by machine may be efficient, but it appears cold and harsh next to the nostalgically iconic hen and her nearby chicks. In The Last Word’s concluding scenes, though, some chickens still get to be chickens even when they are intensely commodified: stragglers roost on low tree branches at night, instead of being crowded into barns; a couple of roosters square off for a fight; and an individual hen is recognized as a champion layer: 297 in a year. The hen, with the assistance of modern technology, has become a machine herself.

About the Preservation
The Last Word in Chickens was preserved in 2015 at Colorlab Corp using the only known surviving element: a tinted 35mm nitrate print from EYE Filmmuseum. The intertitles were translated from the Dutch and are modern recreations. The work was supervised by the Academy Film Archive and funded through a National Endowment for the Humanities grant secured by the NFPF.

About the Music
The new music for this presentation was composed and performed by Michael D. Mortilla. Michael has been composing professionally for more than four decades and has accompanied silent film screenings throughout the United States. Among his many NFPF projects are the accompaniments for the DVDs Treasures 5: The West and Lost and Found: American Treasures from the New Zealand Film Archive. The score for The Last Word in Chickens was improvised in one continuous “take” in order to recreate the live experience of an audience at the time of the film’s original release. According to Michael, “the creative process involves running through the film repeatedly, recording most of the performances. A typical piano solo for a one-reeler like this usually requires about 14 takes to arrive at the final musical work. There is little to no editing of my performances, and absolutely no editing of the score’s overall structure.”