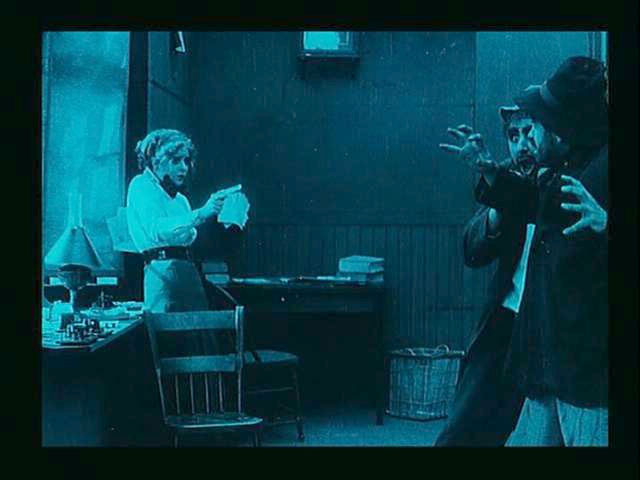 D.W. Griffith’s 1911 one-reel The Lonedale Operator has long been celebrated for its flamboyant and advanced editing. It intercuts three primary spaces—the telegraph office interior, the criminals outside, and the rescue train—with an escalating rhythm. Within this frantic adventure, it also manages a subtle character study of a self-willed, quick-witted girl, who bluffs her way out of the threatening situation without having the gun offered by her father. “This is without doubt the most thrilling picture ever produced,” claimed advertisements for the film.

Griffith remains known most notoriously for his Civil War and Reconstruction–era epic, The Birth of a Nation (1915). Earlier, however, he was director of more than 450 films for the New York–based Biograph Company between 1908 and 1913, when one-reel films running around fifteen minutes were standard. The Lonedale Operator comes in the middle of this output, which is remarkable less for the number of films produced than for revealing an evolving sophistication of acting, editing, and camera techniques. The film was photographed over four days in late January and early February 1911, during the second of Biograph’s winters in southern California, and released in March. Its simple scenario is by Mack Sennett, a Biograph player who coincidentally began directing his first film on the same day that The Lonedale Operator began shooting. Sennett’s later Keystone comedies would make madcap farce out of this chase-and-rescue formula.

The substitute telegraph operator in remote “Lonedale” is played by fifteen-year-old Blanche Sweet, typically cast as the toughest among Griffith’s teenage heroines (more so than Mary Pickford before her and Lillian Gish after). In the early scenes, Sweet shows a teasing mastery over her engineer suitor. At the film’s end, the duped criminal tramps—whom she has held off with a “gun” that proves to be a wrench—bow in self-mocking acknowledgement of her pantomime skill. The following year, Griffith remade the story as The Girl and Her Trust, elaborating on the cutting but not improving on the charm. —Scott Simmon

About the Music
As is so often the case with D.W. Griffith’s films, The Lonedale Operator offers the attentive accompanist a four-part narrative structure of classical clarity, as follows:

1. The opening scenes, lasting almost four minutes, are filled with romance, gentle humor, and familial tenderness within a sunny rural setting, for which lyrical music is appropriate. Three such pieces are played here, of which the third counts for the most. It is the waltzing love song “The Girl Who Cares for Me” (Cobb, Edwards, 1914). Although the song postdates the film by a few years, it has the right blend of suavity and charm to suit the “sweet” operator and her doting engineer.

2. Suspense builds steadily over the next seven minutes, from scenes showing the payroll money in transit to the ones in which the heroine discovers burglars outside and summons help via telegraph before she faints away. These scenes invite the playing of agitatos or misteriosos, as they were known—and published by the thousand—throughout the silent period. I used four favorites, including a quintessential “Andante misterioso quasi agitato” by Theo Bendix (from a volume called Dramatic Music, 1907), as well as the more off-beat “Misterioso no. 1” by Otto Langey (1915).

3. For almost six minutes the film drives through action scenes, enhanced by vibrant cross-cutting and tinting, as the heroine fends off the burglars and the engineer races his train to her rescue. Now the music must shift gears, from agitatos to out-and-out “hurries,” and to this end I relied on one of the period’s common methods: use of a supremely exciting classical piece—in this case Beethoven’s Egmont Overture (1810)—both to bind the scenes together and to propel them forward.

4. Only during the final minute does the tension let up. The close-up of the heroine’s “weapon” is a pivot, leading to varied reactions and the closing embrace of the loving couple. What else for the pianist to do but reprise their love song, in a both humorous and blissful manner? —Martin Marks

About the Preservation
In hindsight, what is most astonishing about D.W. Griffith’s output of nearly five hundred films is that virtually all currently survive in film archives; only about ten of his films are now thought to be lost. (Sadly much more typical is pioneer American filmmaker Allen Dwan, who made 120 films in 1912 alone, about twice as many as Griffith directed in 1912, but who is now represented by only about three surviving films from that year.) Lucky accidents and archival foresight together account for the survival of Griffith’s films. Biograph was one of the few companies to deposit for copyright at the Library of Congress full paper print copies of its films during Griffith’s first years as a director; the later Biograph nitrate negatives were among the first major acquisitions of the Museum of Modern Art’s film archive in 1939.

MoMA’s restoration of The Lonedale Operator from its camera negative is rare in two further ways. The original texts of the film’s intertitles are re-created. (Intertitles have been lost for most of the Biographs, primarily because they were cut in from different film stock and thus not kept as part of the picture negatives.) MoMA has also reproduced the original color tinting. (A record of the tinting colors is sometimes to be found on Biograph’s black-and-white negatives, as in this case). The color tints help to keep coherent the quick-cut spaces of The Lonedale Operator and to darken its day-for-night shots. Blanche Sweet’s ruse with the wrench succeeds because the would-be robbers are left in the dark.

A selection of Griffith’s other Biograph films is available in two overlapping DVD sets (each with a few titles not in the other): D.W. Griffith: Years of Discovery, 1909–1913 (Image) and D.W. Griffith’s Biograph Shorts (Kino). Four other Griffith films are showcased in the NFPF’s Treasures DVD series: The Country Doctor (1909), in More Treasures from American Film Archives; The Voice of the Violin (1909) and Ramona (1910), in Treasures III: Social Issues in American Film; and Over Silent Paths: A Story of the American Desert (1910), in Treasures 5: The West.