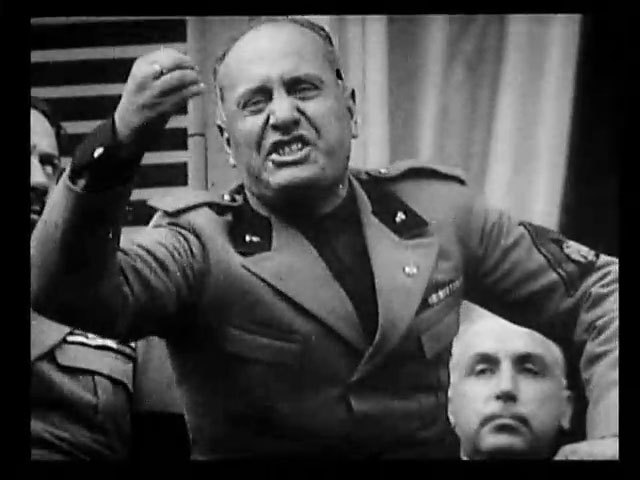 For most of the twentieth century, the moviegoing experience was inconceivable without a newsreel. Released to theaters once or twice a week and running about ten minutes, newsreels at their best were more than loose anthologies of political and sporting events, scandals and ceremonies. As evident from the issue seen here, a roundup of the year 1934, newsreels had arguments to make.

Hearst Metrotone News began with the coming of sound film in 1929 and survived into 1967, the final year of newsreel production. It was controlled by newspaper mogul William Randolph Hearst, who had been producing silent newsreels since 1914. Each December, in place of a regular issue, Hearst Metrotone News usually put together a year-end summary, with editing and voice-over even more fast-paced.

At the close of 1934, there were few signs that the Depression would ever end. One response was to look to strong leaders, a yearning evident in the content and also the structure of this News Parade of 1934. In America, Franklin D. Roosevelt was two years into his first term, his New Deal reforms affirmed by the 1934 congressional elections. In Europe, despotic leaders offered quick fixes that seemed to elude bickering democracies. Hitler had come to power the previous year, and the reel laments the 1934 death of Germany’s ineffectual president, Paul von Hindenburg. The two now obscure European dictators whose 1934 assassinations are recounted had also dismantled their countries’ constitutions. Yugoslavia’s Alexander I was murdered on a state visit to Marseilles, France, in October. (Film of the event was one of the great scoops in newsreel history, although the killing itself was best captured by the rival Fox-Movietone News). Austria’s “Diminutive Chancellor Dollfuss”—a typically irreverent newsreel alliteration—was murdered by Nazis in July. The reel’s largest gaff in hindsight seems to be its praise for Benito Mussolini’s military response to this assassination as “a significant gesture that calls a halt to Germany’s ambitions.” In 1934, Mussolini’s Italian form of fascism was still widely praised in the United States for its “efficiency.”

The News Parade of 1934 makes an emotional argument through its organization alone, which moves from chaos to confident solutions. After the frightening scenes of European politics and of droughts, fires, and earthquakes around the world, we move to America’s rule of law. Bruno Hauptmann is arrested for the Lindbergh kidnapping, “public enemies” John Dillinger and “Baby Face” Nelson meet death by “the government’s gun,” and the new Alcatraz prison makes escape for others impossible. Triumphs of engineering, feats of aviation, advances in production, overseen by President Roosevelt in close-up, bring the ten minutes to an uplifting climax for American audiences.

The apotheosis of FDR—who floats spectrally over a Washington, D.C., parade in the last shot—might be surprising from William Randolph Hearst, whose disdain for the New Deal’s common man is evident in the reel’s equation of labor strikes with rioting mobs. But in 1934, strong leaders appealed to political philosophies left and right. Again, only hindsight undercuts the comfort of the conclusion, when at Pearl Harbor in Hawaii “the president finds Uncle Sam’s outpost defenders on the alert!” —Scott Simmon

About the Preservation
The missing music between sequences arises from the way the Hearst producers recut the newsreels after initial re­lease. For each issue, they generally kept one copy of the negative and the print and cut both into component stories for easier reuse. The Hearst Corporation donated this material to UCLA Film & Television Archive, which has worked backward from synopsis sheets to reassemble complete newsreels from the small film rolls. Often the original print—which alone holds the release soundtrack—was more severely truncated, as is the case with The News Parade of 1934. The sound goes silent where only the negative survives. UCLA’s Hearst Metrotone News Collection consists of some 27 million feet of film.