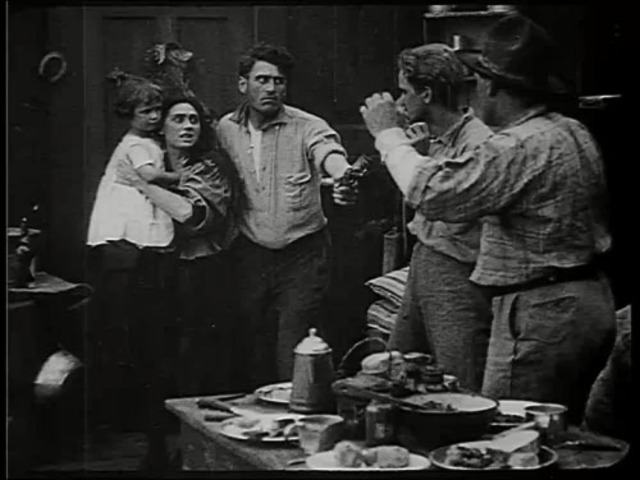 By 1910, one-fifth of all films made in America were Westerns. The Essanay Film Manufacturing Company, the company that produced The Prospector, specialized in the genre. Founded in 1907 by distributor George Spoor (the “S” in Essanay) and veteran actor Gilbert “Broncho Billy” Anderson (the “A”), the studio started operations in Chicago and found early success with a one-reeler on the life of Jesse James. Anderson, soon to make himself into the first Western star, capitalized on the hit and took a crew West seeking sunny weather and more authentic locations. Writing, acting, directing, as well as producing, he shot in Golden, Colorado, and Lakeside, California, before setting up a permanent base in 1912 in Niles, California, a small railroad town 40 miles south of San Francisco. Essanay’s Chicago headquarters continued creating parlor comedies and dramas as well as handling postproduction and bookings.

The Prospector, filmed six months after Anderson’s unit settled in Niles and released that December, follows a familiar storyline in which the Westerner, though unschooled in human wiles, thwarts his foe and creates a new community. On his way to file a claim, a lone prospector (Fred Church) stops overnight with a settler (Arthur Mackley) and his family. The miner little suspects that his host plots to steal the gold. But the settler’s daughter overhears the plan and warns the visitor just in time. The couple escapes with the woman’s younger sister. In store-bought finery suggesting new wealth, they return to the scene of the attempted crime and make peace with the settler. “We’ll work the mine together,” promises the prospector.

For a Western, The Prospector has few outdoors scenes. Most of the action takes place inside the settler’s cabin or in front of out-buildings. But the story, through routine, does exploit the fascination with striking it rich, a perennial Western theme, and ends by giving the settler a second chance. In the West, there are riches a-plenty for those willing to make a fresh start and work together.

Indeed, Niles was such a place. The company strove to produce one Western every week and exceeded the quota in 1912 with 74 films, making Essanay perhaps the most prolific producer of the genre that year. The output included Anderson’s own Broncho Billy films, Essanay’s crown jewel, as well as the comic “Alkali Ike” series. In 1914, the studio wooed Charlie Chaplin to Niles, giving him his own production unit; there Chaplin honed his vagabond persona in films such as The Tramp (1915) and worked as a bit player in at least one Broncho Billy Western. Not until feature-length films became the norm a year later, and Anderson sold his stake, did Essanay decline.

As early as 1908, Westerns were marketed abroad as authentic American products. They became the first type of motion picture for which “Made in the U.S.A.” was a successful selling point. The films thrilled viewers with their stories, action, and unfamiliar landscapes, and played a major role in building the American movie industry. In 1911, Essanay alone exported 20 prints a week, most of them Westerns. Foreign competitors tried making their own, one French company even sending a crew to Chicago, then Texas, for realistic locales, but America’s domination of the genre had already been established. For international audiences, the Western had become synonymous with America itself. (Many thanks to Peter Alilunas, a graduate student of Richard Abel at the University of Michigan, for his invaluable paper about this film.)

More Information
Scott Simmon’s The Invention of the Western Film: A Cultural History of the Genre’s First Half Century (Cambridge University Press, 2003) and Andrew Brodie Smith’s Shooting Cowboys and Indians: Silent Western Films, American Culture, and the Birth of Hollywood (University Press of Colorado, 2003) discuss the rise of the one-reel Western.

The Niles Essanay Silent Film Museum celebrates the work of Essanay in California and hosts regular screenings of silent films.