Please answer both questions below to proceed to the video. Thank you.
CLIPS FROM 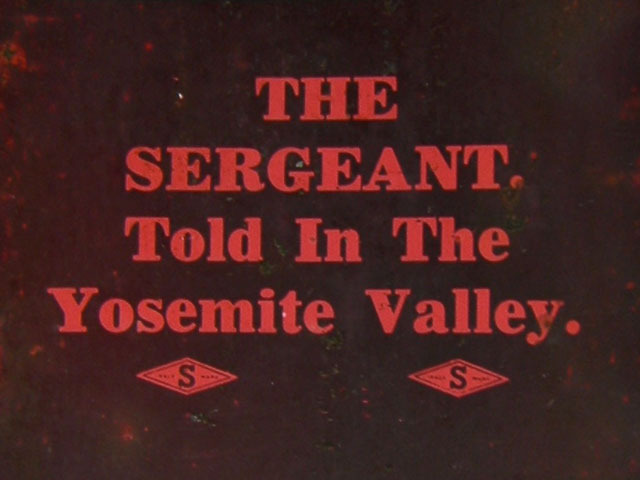 We are proud to preview two clips from The Sergeant (Selig Polyscope Company, 1910), the first film preserved through the American partnership with the New Zealand Film Archive. This project will preserve and make available “lost” American silent-era films that have been unseen for decades. Among the 75 titles are John Ford’s back-stage comedy Upstream (1927); Maytime (1923), an early feature with Clara Bow; the first surviving film directed by and starring Mabel Normand; comic shorts starring Charles Puffy, Snub Pollard, and Joe Murphy; and many more.

The exciting discoveries include Francis Bogg's The Sergeant, one of the earliest surviving narratives shot on location in Yosemite Valley (and possibly in Oregon as well). The one-reeler shows the magnificent terrain prior to the creation of the National Park Service, when U.S. Army cavalry troops kept order, and it is the military presence that provides the backdrop for the story.

In this Western, the sergeant takes his commander’s daughter on a horseback ride along the Merced River (which actually might be Oregon's Clackamas River). When their horses are stolen by a renegade, they are forced to travel back to headquarters by foot and lose the trail. In the first clip, mounted troops search for the lost couple. The two are found the next day and the sergeant is disgraced. However, the sergeant proves his mettle when he escapes during an Indian attack and leads reinforcements to the rescue. The second clip shows his daring exploit.

The Sergeant was one of many Westerns made by the Selig Polyscope Company, the early motion picture company renowned for its “action” pictures. Based in Chicago, Selig sent director Francis Boggs west in 1908 to find authentic locations for Westerns. Shooting films across the Southwest, Boggs made his way to Los Angeles, where he set up the city’s first movie studio. Boggs found that the sunny climate was ideal for outdoor filming and that the area offered a wide array of scenery as well as access to sensational locales, such as Yosemite and Mount Shasta, both used by the company. To act in the films, Boggs hired Hobart Bosworth, one of the first trained Shakespearian actors to crossover to the then-less-respected art of film. Bosworth plays the sergeant in this one-reeler and also wrote the scenario.

Very little survives from Selig Polyscope Company, aside from Col. Selig’s papers in the Margaret Herrick Library of the Academy of Motion Picture Arts and Sciences. After the murder of Boggs on the set in 1911, the company continued on with its popular Tom Mix Westerns, the early serial The Adventures of Kathlyn, and animal pictures (the Selig menagerie became part of the Los Angeles Zoo). However, the company failed to make the transition to features and ended production in 1918.

Special thanks to Robert S. Birchard for his invaluable research about this film.

About the Preservation
This remarkable film—part Western, part travelogue—survives through the single copy shared by the New Zealand Film Archive. The original nitrate distribution print was shrunken but complete. Thanks to funding contributed through “For the Love of Film: The Film Preservation Blogathon" held from February 14 to 21, 2010, the print was painstakingly copied to modern black-and-white safety negative film. This transfer was made from the negative at 16 frames per second and the tints added digitally to reproduce the colors on the original print.

For the exhibition print, color film will be cut in for the red- and amber-tinted intertitles so that the film can be enjoyed today as it was originally seen by audiences in 1910. The Academy of Motion Picture Arts and Sciences is supervising the preservation and will house the nitrate source material, preservation masters, and access copies so that they will remain available for years to come.