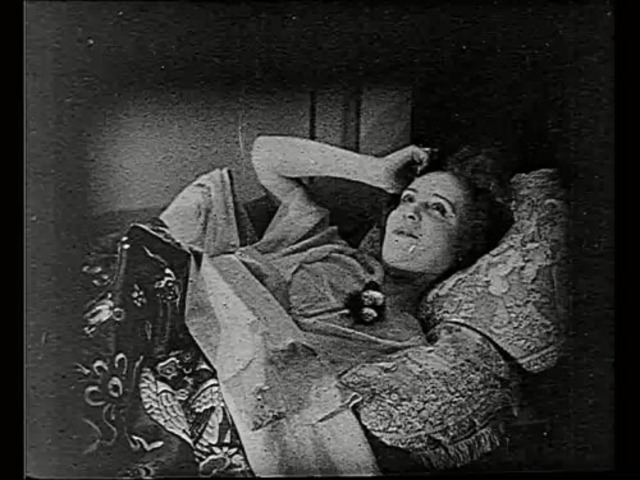 This ad promoting the Australian release of a 1917 American potboiler still tantalizes today, although for different reasons: it teases with a glimpse of a film that can no longer be seen. The Sin Woman, starring Broadway actress Irene Fenwick (later the wife of Lionel Barrymore), is among roughly 8,000 of the 11,000 feature-length movies made in the United States before 1928 that no longer exist. While the survival rate for American silent features may seem low, it is very likely that the rate for shorter films—newsreels, cartoons, serials, and industrial and educational films—is even lower, although, given the paucity of production records, precise figures are impossible to calculate.

Like so many of the social problem pictures of the late teens, The Sin Woman couches a steamy tale as a moral lesson. After a prologue tracing the lineage of the “Vamp” from Eve through the Salem witches, the story follows a modern seductress as she tempts her catch from his happy family. But the Sin Woman is, as the intertitle reminds, “a Daughter of Heredity” and cannot escape her past. When the townspeople learn of her previous dalliances, she is tarred and feathered and driven from town. The husband returns home, a wiser man.

Today movie trailers excerpt the “good parts,” those shots likely to lure audiences into the theater. This 1922 example is no different: it highlights a daring scene showing the adventuress disrobing for her bath. While the preview delivers partial nudity and suggests even more, The Sin Woman managed to pass the National Board of Review in the United States because, in the end, the vamp receives her just desserts. As one American reviewer noted, the “social character study” was a “clean story, cleanly told.” The sensational content, however, sometimes provoked an unintended response. Describing the reaction to the shower sequence, Motion Picture News claimed that the “effect… on the audience is rather funny. Some grab their hats in anticipation of making a hasty exit, while others sit with eyes riveted on the screen.”

Movie previews take the name trailers because they originally followed the feature. The idea seems to have started with local exhibitors who created clips to advertise coming attractions and screened them as they cleared the theater. The earliest examples, like this one for The Sin Woman, consist of several title cards and a sample scene. As the promotional potential became clearer, production was taken over by studios and the form became more elaborate. By the late 1920s, trailers included new artwork, optical printing, and superimposed graphics.

This preview was custom-made for screenings of The Sin Woman at the Sydney Town Hall and seems to date from 1922, five years after the film’s American debut. (Thanks to Simonetta Menossi, a graduate student of Richard Abel at the University of Michigan, for her invaluable paper about this film.)

About the Preservation
The National Film and Sound Archive of Australia generously lent the nitrate print to make the preservation copies. Edge codes on the nitrate source material suggest that the original film stock dates from 1921 and 1922. New prints are available at the Academy Film Archive of the Academy of Motion Picture Arts and Sciences and the NFSA.